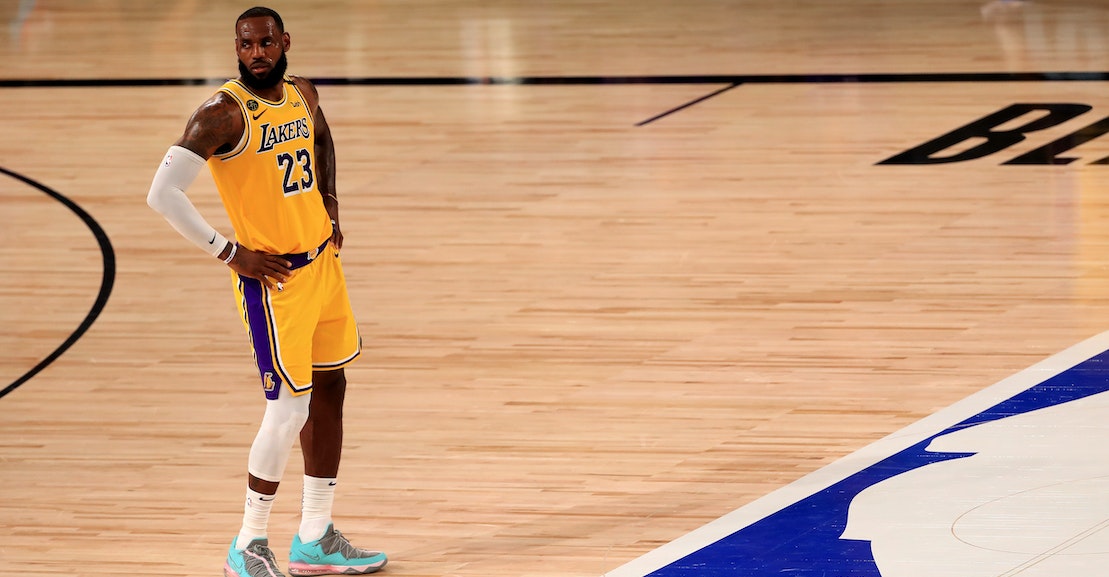 For this group of players, economic material concerns and social justice weren’t separate agendas or at odds with each other. Rather, they were inextricably bound together. In the words of one Black player, who spoke anonymously to Yahoo Sports: “We’re out here marching and protesting, and yet we all leave our families in these scary times and gather to perform at a place where the owners won’t be at?” There was a growing recognition that, not unlike “essential workers” across the country, the predominantly Black NBA workforce was being asked to risk their lives to entertain the public, while the people that owned the league got to sit back and profit from a safe, social distance.

Positioned against the dissenting players was Irving’s erstwhile teammate, LeBron James. While Bradley and Irving were fomenting a players’ revolt, James argued that if players really wanted their message of social justice to reach the public, the best thing to do was play. “Because of everything that’s going on, people are finally starting to listen to us—we feel like we’re finally getting a foot in the door,” he told The New York Times. This argument–that playing provided players with “a platform” and thus could provide the protesters with another level of support and visibility—cast social justice and labor issues in direct opposition to each other.

Needless to say, James’s position prevailed. The players would play—and in so doing, they revealed some of the irreconcilable political tensions at the heart of the “wokest” league in professional sports.

James’s approach has become the dominant mode of NBA politics. Under this paradigm, players see their interests as intertwined with that of the league. James wants to play out the season because winning a championship is good for his brand. Similarly, his loftier social justice goals are achieved in a putative partnership with the league itself. What’s good for the NBA is good for James and vice-versa. Achieving social justice starts to become synonymous with winning another ring.

The contrast between these competing factions could not have been more pronounced. However briefly, the fate of the restart seemed to hang in the balance. But this window was short-lived, as the Irving and Bradley-led group abruptly faded. The quixotic Irving, who was never the optimal figure to challenge the league’s prevailing politics, quickly faded from the discussion. Bradley, whose immuno-compromised son would not have been able to join him in the Bubble, unobtrusively bowed out of the restart. The media went to great pains to deem Bradley’s decision a family matter, and Bradley himself seemed uninterested in kicking up a fuss about the larger issues and implications of his decision. What could have been a flashpoint in the ongoing debate about restarting sports in America, which subsequently grew more urgent following the news about the Marlins, ended with a whimper. When the NBA announced in early July that it was partnering with the NBPA to put “social justice messages” on jerseys, it was framed as a concession to the players—when, in fact, the dissenting faction had long ago given up the ghost.

All of this points to the essential feature of NBA politics: It is premised on the NBA and NBPA agreeing on stuff. Instead of seeing itself as an antagonistic relationship with the league, the union works to broker consensus, often in ways that primarily serve the narrow interests of its biggest stars. The restart was treated as an inevitability that needed to be sold to the players; worse, labor advocacy was subtly depicted as an impediment to players being able to exercise their “voice” on social justice issues. What the situation really called for was a more radical union—one that could have launched a very different understanding of labor in professional sports.

The financial stakes of the restart could not have been higher. Hundreds of millions of dollars in revenue from ticket sales, concessions, parking fees, and other income streams had already been lost for good. A part of the league’s $24 billion national television deal, the single greatest source of league revenue, was now under threat as well. If the NBA canceled the remainder of the season, network partners would likely invoke a “force majeure” clause in their contracts and suspend their obligations. Corporate sponsors might very well follow suit, arguing that the truncated season undermined the value of their partnerships.

The revenue shortfall would have hit both the NBA and individual franchises hard. It would also have been catastrophic for players’ salaries. Under the collective bargaining agreement (CBA) players receive roughly 50 percent of league revenue, and each year the salary cap is adjusted according to the size of the overall pie. Canceling the season, and forfeiting billions of dollars in revenue, would mean huge reductions in next year’s cap. This is to say nothing of how the financial ripple effects might undermine long-term league health. Faced with massive losses, small-market teams would be unable to retain top talent, upsetting the league’s competitive balance and undermining the overall NBA product.