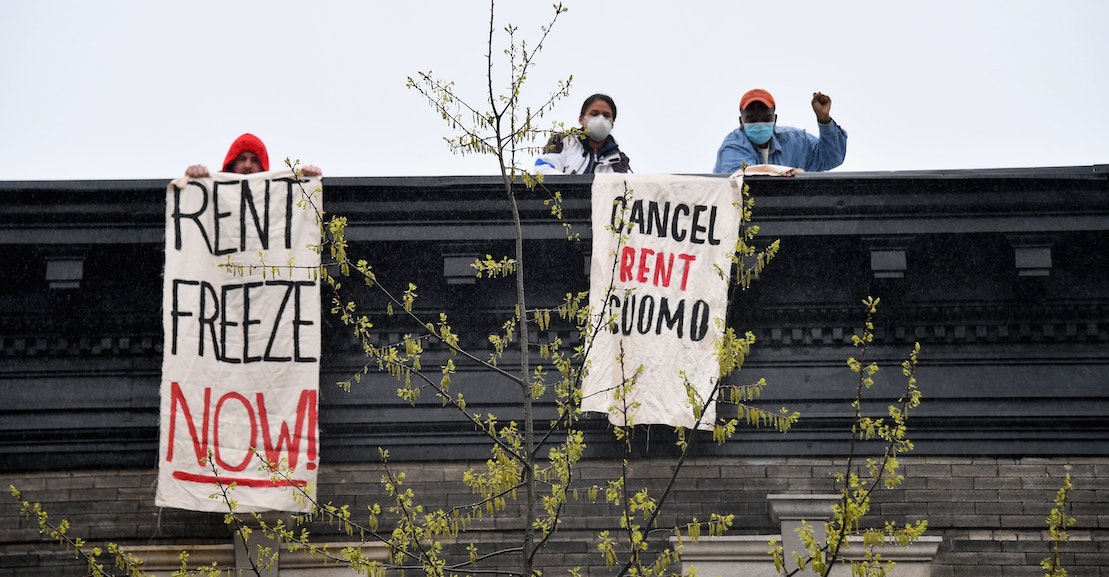 A recent report by Americans for Tax Fairness shows that the wealth of New York’s billionaires increased by $77 billion from March to June. Juxtapose that obscene accumulation of wealth to the $9 billion deficit New York City is facing for the 2020-2021 fiscal year. Despite this, Governor Andrew Cuomo balked at calls to tax the wealthy to fill the shortfall that might result in cutbacks to vital services and, after public pressure, offered a mere $100 million in relief through the State Division of Housing and Community Renewal. And instead of providing support for renters, New York City Mayor Bill de Blasio approved a budget that cuts investment in affordable housing by 40 percent. The mayor has lobbied the State legislature and governor to borrow $5 billion to close the city’s budget gap and, failing to obtain these borrowing powers, has floated the threat of laying off 22,000 municipal workers. (Disclosure: Luis is employed through the city’s Human Resource dministration as communications director for the DemocracyNYC initiative). We have seen this catastrophic austerity regime play out before.

“They wanted lower taxes for themselves, and to use tax incentives to attract and retain business—not to pay for day care, health care or more spaces in the city university system.”

From the 1950s through the 1980s, as owners moved manufacturing jobs outside the city and federal policy subsidized white homeownership in the suburbs and investment in highways, the city repudiated its long history of what historian Joshua Freeman called an island of social democracy and became a touchstone for disinvestment and blight. In response to capital flight and deindustrialization, the city entered into a Faustian pact with bankers, real estate tycoons, developers, and other elite sectors who robbed the city blind at the level of city planning and land use policy. Take, for example, Robert Moses using capital investments in infrastructure to build highways for cars, which resulted in the state and capital shifting funding from cities to suburbia in the 1950s. An alliance between big business, state planners, and the real estate industry is at the heart of the highly unequal New York City of today, as the late journalist and organizer Robert Fitch argued in The Assassination of New York, resulting in elite business interests positioning themselves as arbiters of the city’s future and claiming a monopoly on its wealth. Phillips-Fein writes in Fear City: New York’s Fiscal Crisis and the Rise of Austerity Politics:

These businesspeople disliked the expansive social sector, which seemed to them unnecessary, and they feared that taxes would have to keep being raised to pay for more services for poor people. They wanted lower taxes for themselves, and to use tax incentives to attract and retain business—not to pay for day care, health care or more spaces in the city university system.

But in other instances, workers fought back as they were blamed for the city’s financial woes and wealth was siphoned from their communities by the new robber barons. In the 1970s, as landlords defaulted or torched whole neighborhoods to collect insurance payments, some working-class tenants saw an opportunity and assumed community control of their buildings, owning them outright through sweat equity. Taking matters into their own hands, tenants went on rent strikes, sometimes putting the rent they had withheld into an escrow account or investing it into fixing their buildings themselves. In other instances, homesteaders moved into buildings that had been abandoned by landlords and rehabilitated them by making their own repairs. There were also groups like Los Sures in Williamsburg and Banana Kelly in Longwood that partnered with well-organized tenants to take direct control of abandoned properties and convert them into cooperatives. By 1979, the New York City Department of Housing Preservation and Development was the second-biggest landlord in New York after the New York City Housing Authority, or NYCHA, owning forty thousand occupied and sixty thousand empty apartments.

With New York state projecting a budget shortfall of $13.3 billion this fiscal year, we are presented with another such opportunity for creative organizing. What if today, rather than succumb to austerity—recognizing that rent forgiveness and other short-term measures will not fundamentally challenge the city’s housing crisis—we seek similar wealth redistribution through socialized housing? This is an undoubtedly ambitious project but an urgent one to begin building toward.

In places like New York, tenants already have some of these tools at their disposal, and progressive lawmakers have introduced policies to give them more power, according to Stein:

When coupled with public acquisition funds, programs like Tenant Opportunity to Purchase Acts—which entitle renters to a right of first refusal when their building goes on sale and incentivizes limited-equity coop conversions or other forms of permanent affordability—and “First Look” agreements—which offer community-based organizations the chance to buy buildings before they go to auction if they can preserve them as affordable housing—can be used to dramatically expand the stock of social housing in our cities.

Tenants are already trying to use the means available to them to reclaim control of their buildings from negligent landlords. Edward Garcia, lead community organizer at the Northwest Bronx Community and Clergy Coalition, told The New Republic that tenants at a rent-stabilized complex where he organizes have been on rent strike since February. In addition to demands around improving conditions through the appointment of a responsible manager, the building’s tenant association has called on the city to transfer ownership of the building to its working-class tenants, shifting its deed from private ownership to a limited-equity cooperative housing arrangement.

Beyond just a revitalized push to take over buildings, tenant organizers have also connected the demand to defund the police to reinvesting in public housing, shifting budget priorities from violent state infrastructures to those that build and sustain communities. The New York Police Department’s budget is dramatically outsized when compared to NYCHA, Michael Velarde, a Chicano labor and community organizer, told The New Republic, and “decades of investment in the police, as well as neoliberal cuts to social spending more broadly, have resulted in over $45 billion in essential repairs owed to NYCHA residents.”

Michael Higgins from the Brooklyn Anti-Gentrification Network noted to us that NYCHA tenants have dealt with an onslaught of challenges, including the devastation wrought by Hurricane Sandy and now Covid-19. Among NYCHA residents, Higgins said, “There is also a deep cynicism to the calls from the housing authority that it does not have enough money to properly maintain its portfolio, instead seeing deep corruption and mismanagement of funds as the source for many of the authority’s failures that have led to its oversight by a federal monitor and ongoing restructuring.” But he finds hope in a vision of fully funded public housing “saved through deep organizing” that “treats its housing stock similarly to the abandonment of thousands of units in the 1970s as both a sweat equity program but also as part of a wider fight to liberate land from speculation through mechanisms such as community land trusts and other forms of collective ownership.”