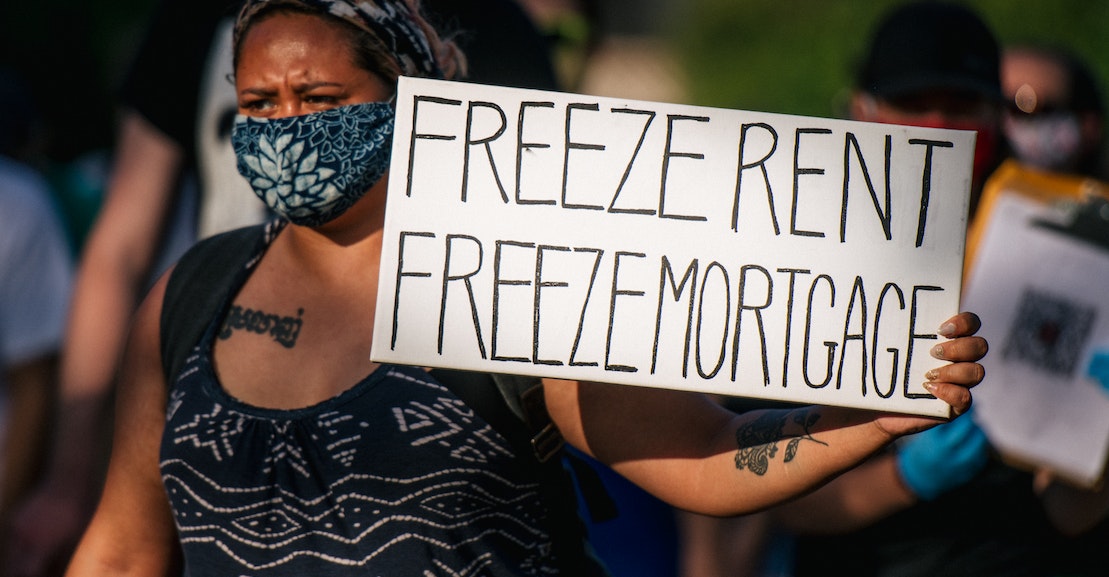 I left a job as a secretary at a local Pasadena church in January in order to start working independently as an interpretive translator. My timing wasn’t the greatest. By March, everything shut down. The few clients that I had, because they were schools and churches, closed down right away. I was scheduled to take the judicial interpreter test on March 19, a job with a salary double what I was making as a church secretary, but that got canceled, too. That’s when I knew I was in trouble—I wasn’t going to be able to make my March rent.

I called my landlord and told them all the work has stopped for me. I had always paid my rent before then. But they sent me a form that included a repayment schedule and asked me to sign it—even though, by that time, Pasadena had passed an ordinance prohibiting eviction. That’s when I immediately looked for assistance from the Pasadena Tenants Union. With them, I came to the conclusion that I didn’t need to sign the document because we are both covered by this ordinance, which makes it clear that I owe the rent after the emergency is lifted.

Pasadena had a rental assistance program that they allocated a million dollars for, and I applied for that. There were over 600 applications, and they could only help around 220 people. I was put on a waiting list. Then I applied to the Los Angeles County program. They were flooded with applications, and it’s a lottery system. I’m waiting to hear back from them in the next five days.

I won’t have a chance to take the judicial interpreters test, which was pushed back again earlier this summer, until maybe March of 2021, but I’ve continued working when I could—when work was available. I’ve been able to transfer some of the translator work that I was doing to Zoom calls. Not everybody’s done that, but a couple of clients have been pretty consistent. I also signed up to work as a census enumerator. Traditionally, that’s been at least a couple months of a good—but temporary—paying job. And I’m fully bilingual, Spanish and English, so I figured it would give me the chance to do work that’s meaningful and that is very much needed here in L.A. We only worked for three weeks.

I applied for unemployment. I dialed the same number for days. I finally got through and was able to get somebody to process an application for me. My unemployment payment is $167 a week. But if I make more than that through my translator clients, it gets cut off. I see in the news that some folks think that that might be an incentive for people to stay home. I’m thinking, “Sure, of course it would.” But I don’t see that as the problem. The question we should be asking is, why is that such an easy choice? It’s because our salaries have not kept up with inflation for decades now.

I work as a volunteer now with Pasadena Tenants Union, doing a little bit of tenant counseling and interpretive translation for them. I’m going to turn 50 soon. A lot of the people that work with the PTU and organizations like it are younger people, in their twenties and thirties. And even though I am a progressive, I did have trouble at first with the things that I heard in the meetings. Like, when I first heard “Cancel rent,” I was like, Cancel rent? And there were also things like, “Down with the landlords” and “Let’s end this whole feudal system.” I know PTU isn’t going to save me or pay my rent, but it has changed the way I see this whole tenancy situation. I’m beginning really to understand what they’re trying to do, why they’re trying to do it, and the reasoning behind why it is that the housing system is unsustainable.

After all this—the unemployment, the census gig, the translator work—I was able to pay my March rent. But I am still behind on May, June, and July, and I owe half of September’s rent. What really worries me is what’s gonna happen next year. I may find more income sources; I may not. I may be able to take my test, which would greatly increase my income earning ability; I may not. I have consumer debt in the thousands. I also need to come up with my monthly rent. And as of now, I don’t have an answer for that. I honestly don’t.