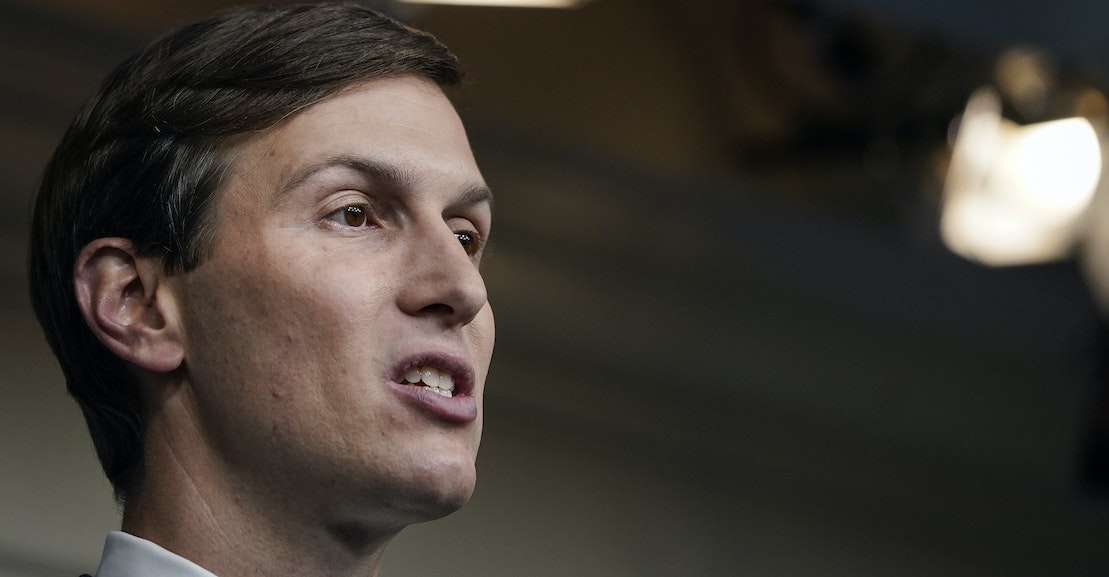 The Jared Kushner Phenomenon—how this unpleasant and widely loathed man, the perpetual son, became so important to the Trump administration—would be very interesting if it weren’t so deadly. It would be funny, too, that he is so massively incompetent, so out of his depth that you can barely see the top of his unconvincing comb-over, if he weren’t one of the principal authors of the current pandemic crisis. He is the least effective psychopath in American history, managing to be both ruthlessly dedicated to enriching himself and also really bad at it. He has the malice of Cy Tolliver and the brains of E.B. Farnum. How fascinating: A Very Rare Type of Guy, right in our own White House.

A new piece from Vanity Fair has provided fresh evidence of how Kushner’s unique incompetence—most notably his maniacal commitment to “free market” principles—has hampered the federal response to the coronavirus. According to the magazine, in March, Kushner told a meeting of officials tasked with responding to the pandemic that the federal government “is not going to lead this response,” and it was instead “up to the states.” “Free markets will solve this,” Kushner reportedly said.

As always, there was also a self-serving, murderous political calculation, too: One attendee told the magazine that Kushner was “less interested in finding a solution because, at the time, the virus was primarily ravaging cities in blue states.” (This did not pan out so well.) The new story comes just a few months after a New York Times article detailed Kushner’s reliance on a sort of LinkedIn power-user crowd of wealthy twentysomethings with fancy degrees and absolutely no idea what they were doing. Now we have a little bit of extra context: He did this because he really did believe the private sector is better and that the market would more efficiently allocate equipment.

This intuitively makes sense, after all. A rabid belief in the sacred free market, exalted above all else, might be the only thing that can really explain what happened with this administration’s response to the pandemic, and why so many decisions not to help people were taken. It certainly seems politically insane to do things like blocking the post office from mailing out free masks to every American household, or indeed generally allowing a deadly virus to spread unchecked right before a presidential election in which one of the two people who might lose happens to be the only person in America who’s stupid enough to employ you. If you truly believe in letting the free market take care of things like nationally coordinating the distribution of personal protective equipment, even when the private sector is “begging” for the government to take over, then perhaps you might also make this insane wager.

This is always the question with conservatives: Do they really believe this shit? There’s no shortage of vicious right-wingers in this town who came here dreaming of cutting Medicaid, people who wake up every morning and go to work to find new ways to rip food from poor children’s hands—all while pretending to believe that the free market is simply the best way of ensuring Freedom. They work very hard to act like they don’t absolutely love that poor people die young for lack of insulin, or money, or hope. They have been very successful in convincing the media that their ideology is not murderous, and actually is not an ideology at all. It is just Common Sense.

What Jared Kushner seems to have missed is the lesson on when to cut bait on the big scam. You are probably not supposed to say, even in the relative privacy of a government meeting, that New Yorkers “are going to suffer and that’s their problem,” because their Democratic governor “didn’t pound the phones hard enough.” You can even use the government’s powers in times of crisis to leverage a few discrete acts of goodwill and preserve the fate of your own political party, at which point you can return to using your position to dismantle those parts of the government that help regular people. It would have been perfectly possible for him to give up all his free market dogma for a few months, let the government coordinate a robust response to the pandemic, save some lives (and get the credit for doing so), and then return to the work of slashing the safety net and cutting business taxes. Not that this colossal missed opportunity matters much to Jared personally: Guys like him always seem to get away with it, so enjoy laughing at him while you still can.