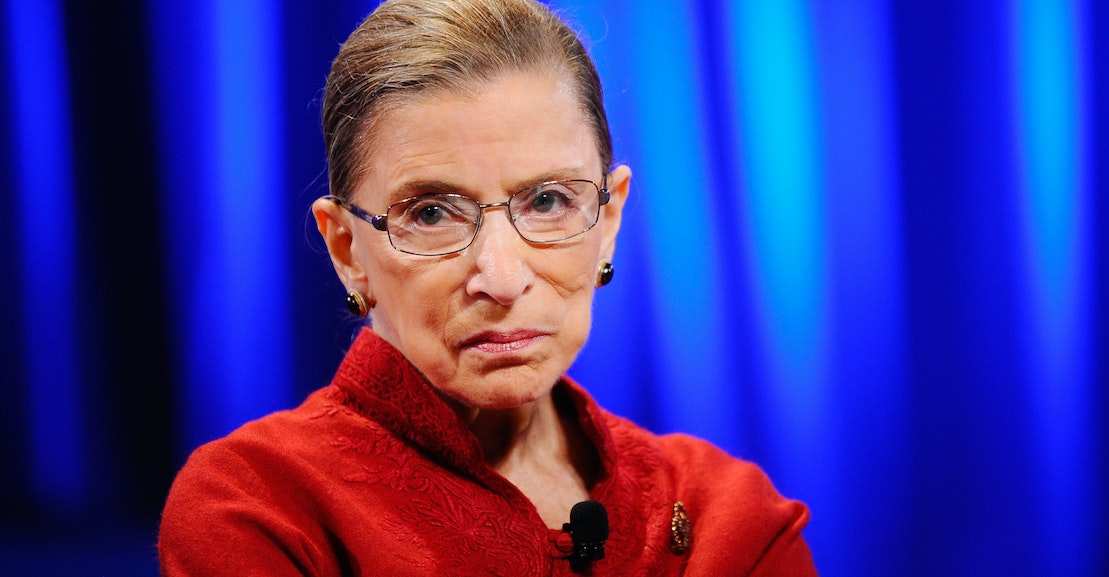 Ruth Bader Ginsburg, the pioneering lawyer, judge, and Supreme Court justice, died on Friday at the age of 87. Nominated to the Court by Bill Clinton in 1993, Ginsburg’s legacy stretches back six decades. One of the most profound and consequential legal minds in American history, Ginsburg played a pivotal role in advancing women’s rights, serving as the first general counsel of the American Civil Liberties Union and founding the organization’s Women’s Right’s Project. On the Court, she was biting, funny, and consistently in the right, playing a pivotal role on issues like gay marriage and gender equality.

It’s rare for Supreme Court justices to become celebrities. But Ginsburg, particularly in her last decade, was a bona fide star—not just RBG but the Notorious RBG. Ginsburg’s unexpected pop culture relevance reflected not only her enormous legal contributions, but also the strange, macabre place she occupied in contemporary politics.

She was a testament to the enormous progress that liberals have achieved over the past half-century, as well as evidence of just how tenuous that progress is. She helped author legal victories that would have been unthinkable a generation earlier—victories that could quickly be undone if she were to suddenly fall ill or die, a possibility that has been fretted over constantly over the last decade of her life. As she fought cancer repeatedly, she was someone liberals prayed for, a frail octogenarian who seemed to be preventing the dam of American democracy from breaking all by her lonesome.

Ginsburg’s celebrity reflected several interlocking trends. One was her awesome, path-breaking judicial career. Another was the increasing calls for her to retire during Barack Obama’s second term to make way for another, younger justice who could continue her liberal project. These two combined to turn Ginsburg into a “badass,” which was aimed at countering the argument that she was too old, that she should step aside—the Notorious RBG could rule forever.

The third trend was a growing obsession with celebrity among Democrats, as if celebrity itself could somehow transcend the grubby business of politics. With figures like Ginsburg and Barack Obama, this thinking went, the party could win the day on the back of its leading lights. Those pleading for Ginsburg to retire were brushed off, or branded as sexists. Meanwhile, the conservative machine installed a bunch of young jurists to the Supreme Court who might not be famous, but will be determining the fate of this country for years to come.

In the coming weeks the Democratic Party’s approach to the Supreme Court will be tested as never before. Despite having blocked Merrick Garland’s nomination nine months before an election, Mitch McConnell has pledged to hold a floor vote for Ginsburg’s replacement before this year’s contest. The Democrats, with a minority in the Senate, have few procedural means of stopping the Senate majority leader, should he be able to ram a nominee through with unprecedented speed—and one should expect that he will find a way.

It seems unlikely that Ginsburg’s final wish—“My most fervent wish is that I will not be replaced until a new president is installed,” she told her granddaughter earlier this week—will come to pass. That her seat might go to an arch-conservative is at least partly the Democrats’ fault—for not having the foresight to urge her to step down when it was in their power to do something about it.