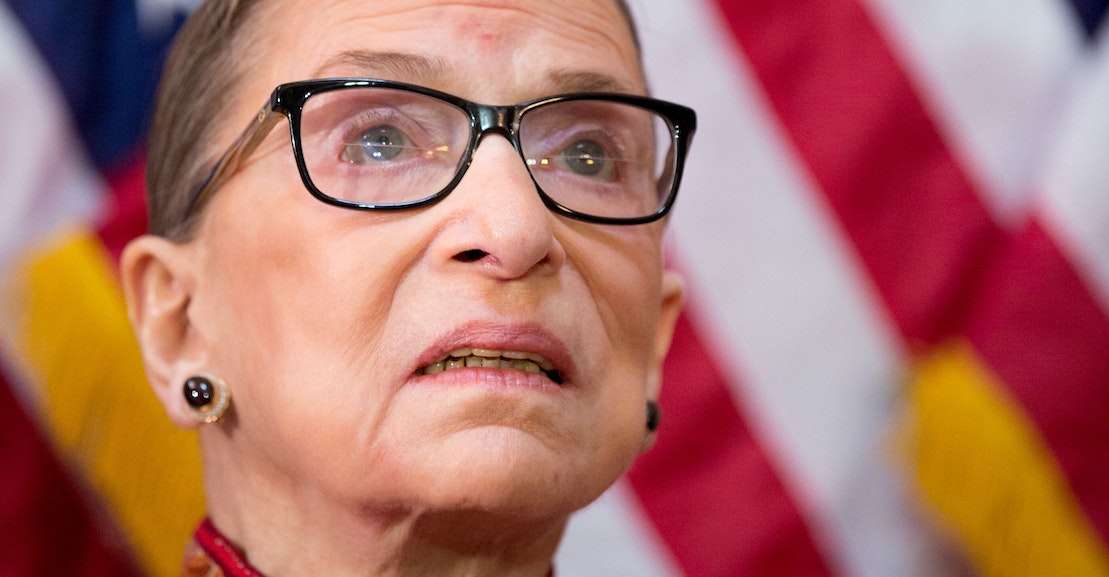 Justice Ruth Bader Ginsburg, the leader of the Supreme Court’s liberal wing and a trailblazer for women’s rights in the law, died on Friday at the age of 87. According to NPR, Ginsburg dictated a deathbed statement to her granddaughter earlier this month, one acknowledging what everyone had long known—that her death would send a destabilizing jolt through American politics if it occurred before January 20, 2021. “My most fervent wish is that I will not be replaced until a new president is installed,” she reportedly said.

That wish appears unlikely to be fulfilled. President Donald Trump is now poised to nominate a staunchly conservative jurist to fill the vacancy and Senate Majority Leader Mitch McConnell has already stated he would hold a floor vote on that nominee, abandoning the election-year stance he pretended to take four years ago as Justice Antonin Scalia’s seat was left vacant. But this is not 2016, and the politics of this moment may turn out differently than most observers expect.

The most immediate impact of Ginsburg’s death will be felt on the Supreme Court itself, which is now left with eight members for the immediate future. Her death comes just three weeks before the start of the court’s October term. Until the vacancy is filled, the court will be ideologically split between three liberal justices, Chief Justice John Roberts, and four reliably conservative justices. Roberts played a decisive role as the fifth vote in almost every major Supreme Court case last term, including in a series of notable defeats for right-wing advocates before the court. Now he is no longer the court’s middle vote.

Most cases heard by the high court are not decided along the familiar 5-4 lines, of course. But many of the most consequential ones are. Without Ginsburg, the liberal justices will need two votes from the court’s conservative wing to prevail on any particular case. That may be beyond their powers of persuasion in cases involving abortion, LGBT rights, and the Second Amendment. The court is currently scheduled to hear a case that threatens to strike down the entire Affordable Care Act exactly one week after Election Day.

Her death also complicates a more immediate wave of legal battles: those surrounding the 2020 election. The Trump campaign is waging a high-dollar, high-stakes war in courts across the country over mail-in voting, citing phantasmal fears of voter fraud in an effort to limit access to absentee ballots during a pandemic. Both campaigns also anticipate those battles to continue after Election Day as states try to count what’s expected to be a historic number of mail-in ballots. Ginsburg’s absence raises the possibility that the court could reach a 4-4 deadlock in an election-related case if it falls along the usual lines—and that would only be if one of the conservatives breaks ranks with his colleagues in the first place. Only two of the court’s current members, Justices Clarence Thomas and Stephen Breyer, also participated in Bush v. Gore.

Across the street from the Supreme Court building, Ginsburg’s death will also upend the Senate. This is the second time in four years that a justice has died in a presidential election year. When Scalia unexpectedly died in February 2016, Senate Majority Leader Mitch McConnell immediately vowed that the Republican-led Senate would not vote to confirm a Supreme Court nominee put forward by Barack Obama. “Given that we are in the midst of the presidential election process, we believe that the American people should seize the opportunity to weigh in on whom they trust to nominate the next person for a lifetime appointment to the Supreme Court,” McConnell wrote in a Washington Post op-ed five days after Scalia’s death.

More recently, McConnell admitted that he would move forward with a Supreme Court nomination by Trump if a vacancy arose in 2020. He quickly confirmed that stance on Friday night, claiming his rule in 2016 only applied when the White House and the Senate were held by different parties. “President Trump’s nominee will receive a vote on the floor of the United States Senate,” he declared in a statement on Ginsburg’s death. McConnell’s claim that the “rule” only applies when the Senate and White House are controlled by different parties is, of course, a fig leaf; his goal is to maximize conservative control over the courts whenever and wherever possible.

How soon could a new justice be installed on the court? That depends on how quickly the Senate wants it to happen. Previous Supreme Court nominations took multiple months to work their way through the Senate Judiciary Committee’s confirmation process. Ginsburg’s long illness and Trump’s ever-expanding Supreme Court shortlist means the White House may not wait long before announcing a nominee. In theory, the Judiciary Committee’s Republicans could also try to accelerate the process on their end, especially if Trump chooses a nominee who recently went through it for a seat on the lower federal courts. Senate Democrats have no procedural tools to block a nominee outright from getting a floor vote, though they will likely try to slow down the process.

What would the result of that Senate vote be? Multiple Republican senators signaled before Ginsburg’s death that they would not vote to confirm a Supreme Court nominee this year, abiding by the common understanding of the purported rule McConnell invoked in 2016. “If an opening comes in the last year of President Trump’s term and the primary process is started, we’ll wait for the next election,” South Carolina Senator Lindsey Graham, the chairman of the Senate Judiciary Committee, told The Atlantic in 2018. Whether he’ll stand by that commitment amidst a close re-election fight remains to be seen. Other key senators to watch will be Alaska’s Lisa Murkowski, Utah’s Mitt Romney, and Maine’s Susan Collins, the last of whom also faces an uphill battle to keep her seat in November.

Unless Ginsburg’s former seat somehow remains vacant until a Biden presidency, her death amplifies a growing legitimacy crisis for the Supreme Court. Democrats now face the prospect that a president who lost the popular vote by three million ballots in 2016 and has never received the backing of a majority of Americans will get to name one-third of the high court’s justices. Whoever Trump nominates would likely move the court even further to the right on a number of social issues where the American public is moving to the left. Neither Democrats nor Republicans have moved past the scorched-earth battle to place Justice Brett Kavanaugh, either.

Biden, a veteran of the judicial wars since he helped defeat Robert Bork’s nomination in 1987, strongly opposes adding more seats to reverse Trump’s impact on the high court. “I would not get into court packing,” he explained during one of the Democratic primary debates. “We add three justices; next time around, we lose control, they add three justices. We begin to lose any credibility the court has at all.” But as the American left faces the prospect of a 6-3 conservative court for at least a generation, Biden would face immense pressure as president to push back. Kamala Harris, his running mate—and thus the de facto future figurehead of the Democratic Party—said during the primaries that “everything is on the table” when it comes to the Supreme Court’s balance of power.

Ginsburg’s death is a major loss for the nation, and a particularly painful one for liberals. But if there are any glimmers for hope for Democrats as they weigh what happens next, it’s the American people themselves. Trump took power in 2016 with the help of then-skeptical Republicans who nonetheless feared a Supreme Court where Hillary Clinton chose Antonin Scalia’s replacement. Even before Friday night’s tragic news, that energy was shifting towards the left. Recent surveys show that Democratic voters are closing an enthusiasm gap with their GOP counterparts when it comes to the Supreme Court as a decisive factor in their vote. A New York Times/Siena College poll conducted last week found that majorities of voters in Arizona, Maine, and North Carolina favor Biden over Trump when it comes to naming the next justice. Despite the stress and storms ahead, there’s also a faint breeze at the Democrats’ backs.