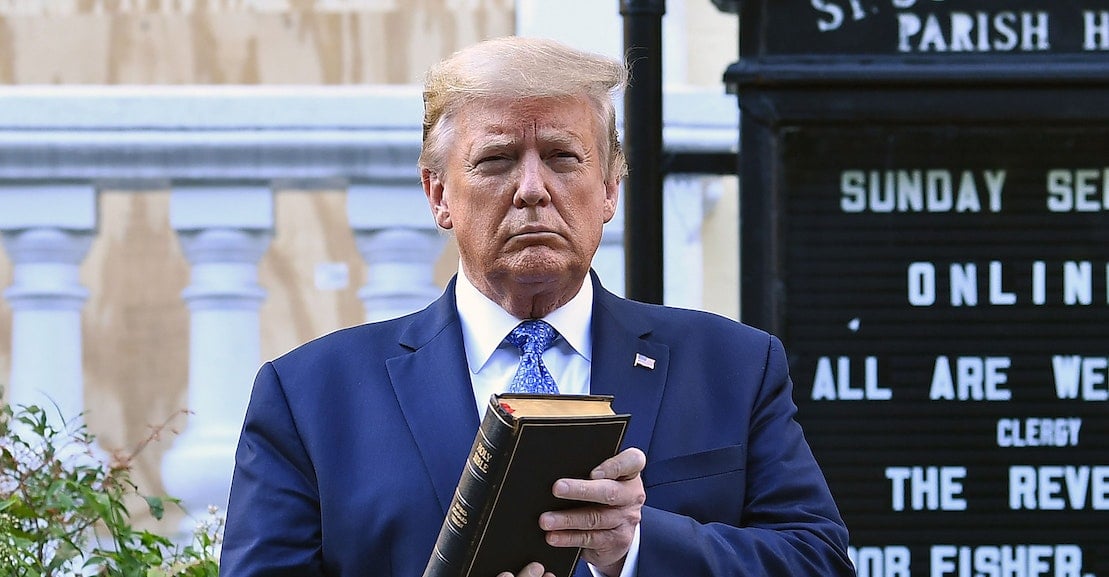 Five years ago this week, Donald Trump’s presidential campaign hit a snag. The second Republican primary debate had not gone well, and he was taking so much flak for failing to correct an Islamophobic supporter at a rally in New Hampshire that he canceled an event in South Carolina scheduled for the next day. In just 72 hours, he seemed to go from dominant front-runner to an amateur making rookie mistakes. Heading to Iowa on September 19 for a meeting of the Faith and Freedom Coalition, where every major Republican candidate was making an appearance, he apparently decided to try something new.

“I brought my Bible,” he said to the audience of conservative Christians, waving a faded blue hardcover embossed with the words Donald Trump as he took the podium. “See? I’m better than you thought.” In case his intended message was too subtle, he made it plain a few minutes later. “I’m a Christian,” he said. “Do you believe me?”

Such an obvious ploy seemed unlikely to work. He grinned as he lifted his Bible overhead, looking uncharacteristically sheepish, almost acknowledging the absurdity of it—“the religious equivalent,” CNN commentator Errol Louis noted at the time, “of going to an Iowa farmer in some overalls and some brand new boots.” Taking the stage after Trump, Louisiana Governor Bobby Jindal tore into his GOP primary rival’s attempt to use holy writ as a shibboleth. “The reality of Donald Trump is that he’s a narcissist. He believes in nothing but himself,” Jindal said. “Folks, he hasn’t read the Bible, you know he hasn’t read the Bible. He only reads books he’s in.”

That both Jindal and Trump received hearty applause suggested a rift in the room that would not soon heal. And yet, somehow it did—thanks perhaps to these remarkable moments when Trump, with a wink, played the part of a man of God, and conservative Christians decided to play along.

Since that day in 2015—which seems to have been Trump’s first public use of the Bible—his relationship to the potent, contentious religious symbol has evolved from smirking, half-hearted displays of feigned piety to grave rituals designed to feed the devotion of his base. As he has repeated the scripture-waving act—a week later at the Values Voters Summit, then in a video thanking evangelicals for their support in January 2016, and most recently in June, when police teargassed protesters outside the White House so he could pose in front of a nearby church—it has grown darker, while its broader significance has become more clear.

Just as the Bible his mother gave him is imprinted with his name, Trump has left his mark on a strain of American Christianity, but in doing so he has revealed something that has been part of the faith all along.

Throughout his campaign and early in his presidency, the unflappable support of many religious voters for an outwardly irreligious and lascivious politician confounded many in Washington and the media. Though no longer a surprise, this support is commonly assumed to be rooted in simple pragmatism or cynicism. But in that otherwise empty gesture five years ago, Trump stumbled onto something evangelicals and others have long demonstrated but don’t often acknowledge: Americans have always been open to remaking God in their image, reframing tradition to fit individual needs and contemporary concerns. In his accidental embodiment of the latent flexibility of even the strictest of faiths, Trump’s treatment of religion is not an aberration, but the norm.

The president’s level of interest in the actual text of the book he has often called his favorite has never been much in doubt. When asked to name a beloved biblical verse in 2015, he punted. “Look, the Bible means a lot to me,” he said, “but I don’t want to get into specifics.”

Through much of the last five years, the specifics have been left largely to Vice President Mike Pence, who raised the hackles of some and the goose bumps of others last month when he blended the New Testament and patriotism in his address to the Republication National Convention. “Let’s run the race marked out for us. Let’s fix our eyes on Old Glory,” he said, substituting the Star-Spangled Banner for Jesus in a reference to the Epistle to the Hebrews.

In fact, history suggests that using the Bible this way is both thoroughly Christian and thoroughly American. At least since John Winthrop borrowed a phrase from the Sermon on the Mount to say the Massachusetts Bay Colony should be like a “city upon a hill,” scripture has been used as a lens on the American experience and vice versa. The words have always mattered less than what we say about them, raw material used to craft notions of the Bible that best suit our needs.

Thomas Jefferson took this idea literally. Going through the four gospels line by line to remove parts he felt could not be supported by reason, he cut away the virgin birth, miracles like turning water into wine, and even the resurrection. He called what remained The Life and Morals of Jesus of Nazareth, better known now as the Jefferson Bible.

In his way, Trump might be seen as part of this tradition of radically revising scripture, reducing it to the parts that seem to matter most in a particular place and time—reducing it, in this case, until only the notion of it remains. Trump doesn’t want to get into specifics because he doesn’t know them, as his much-derided “Two Corinthians” remark showed. For the most part, whenever he has appeared with the good book, it has remained resolutely closed. When he signed Bibles at a Baptist church in Alabama last year, his Sharpie did not make it past the front cover. As he held a Bible aloft in front of St. John’s Episcopal Church in June, he turned it over in his hands, looking for a moment like he was trying to find the “on” button. The few times he has opened it before an audience, he has turned to the same page: the one that shows where his mother wrote his address when he was a boy.

None of this is meant as a criticism of Trump’s religiosity or lack thereof. In a perfect world, what he believes or does not believe would have no bearing on how he does his job or his prospects for reelection. Yet it is significant nonetheless because it lays bare a hidden truth about Christianity in America. The Bible is a powerful talisman for the majority of Americans, but Trump’s successful use of it these past five years suggests that, to many, it is only that: a symbol to be wielded; a book whose content matters less than the one holding it; an expression of tribal identity as much as creed.

Through his ability to harness that symbol, Trump may have inadvertently created a Bible even more daring than Jefferson’s—one with only the cover remaining.