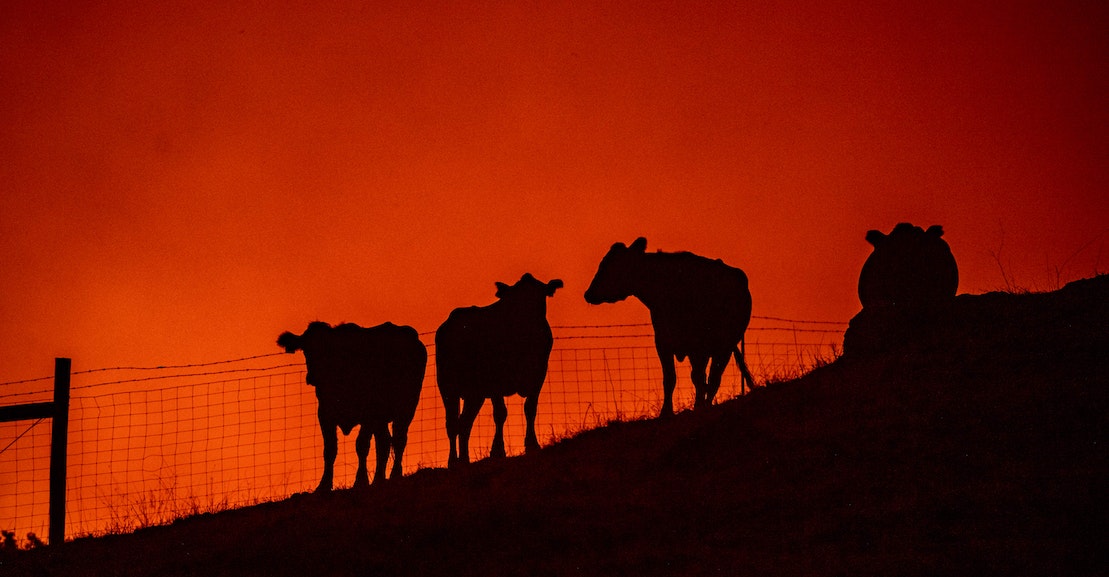 In a video shared by the United Farm Workers on Friday evening, the sky was orange and the air hazy. In Oregon City that day, the Air Quality Index was hovering between 201 to 300, deemed “very unhealthy” by the Environmental Protection Agency. But the farmworkers were there all the same, standing in a field with masks, handkerchiefs, and neck gaiters on, trying to pick as many grapes off the vine as possible.

It’s not just Oregon. In California, 38-year-old farmworker Juan Reyes told The Guardian his chest and throat were hurting after a full day of picking strawberries and that he was having “difficulty breathing.” At a grape field in Lodi, picker Luis Sandoval told ABC10 the notion of hazard pay was never broached by his boss. Go back further, and you’ll see a familiar cycle of coverage. Wildfires in 2018 didn’t stop strawberry field supervisors from pushing 34-year-old farmworker Santiago to pick up the pace. “They don’t care about our health,” Santiago said in an interview with The Washington Post. “They just care about the strawberries.”

Much like the Smithfield plant workers forced back into slaughterhouses shortly after the pandemic exploded, farmworkers in California and Oregon are being pushed out into the fields despite chaotically dangerous conditions. Their pay hasn’t budged, nor do they have the promise of health care for potential long-term health impacts from repeated smoke and ash exposure.

An out-of-control virus, on one hand, fields set ablaze on the other: This is the ghoulish normalcy established by decades of corporate-led attacks on farmworker unions and shamefully bipartisan policies locking farmworkers out of basic labor protections. As a result, the American agriculture and food processing industries come with a kind of death pact built in for workers. Things don’t have to be this way, but the people picking grapes while the wildfires rage in the mountains behind them are running out of time.

The labor schemes employed by agriculture and food production companies alike follow the same model: Where technology has begun to eliminate the need for pickers in the harvesting process for crops like soybeans, cotton, and corn, other crops, like grapes and strawberries, still require human hands to transport them safely from the field to the delivery trucks. So, to keep their profit margins as wide as possible, corporations have learned to lean on undocumented workers.

They’ve also figured out the right government and other levers to pull to ensure that workers are always available, regardless of external conditions and in spite of their health. “Whether it’s wildfire, pandemic, drought or storm, farmworkers are out in the field,” Lucas Zucker, the policy and communications director for the Central Coast Alliance United for a Sustainable Economy, told The Guardian. “It’s a largely immigrant workforce, many undocumented. Many are from Indigenous communities from southern Mexico who face even greater barriers to accessing services and reporting labor abuses.”

American workers were able to stay home from work, if only temporarily, because the federal government issued one-time stimulus checks in addition to bolstering unemployment assistance with a weekly $600 supplement (which has now expired). Undocumented workers were excluded from those programs, with many states failing to fill in the gaps and offer desperately needed material supports. (California and Oregon have made some funds available, and California recently passed another set of aid provisions for undocumented residents, but the governor has yet to sign it. Still, these are patchwork programs.)

What’s unfolding now is a man-made disaster. As the workers who spoke to ABC10 and The Guardian explained, their only real option was to continue going to work if they didn’t want their families to go broke. After watching two fellow farmworkers die from the coronavirus in Washington, an anonymous 47-year-old Jamaican visa worker and father of five told Crosscut he decided it was better to just pack it up and go home. “I need the money,” he said. “But I’m not going to risk it.” For the undocumented population for whom return is not always an option, the situation is even more dire. Smithfield workers in North Carolina informed WRAL of that much in May, with one anonymous employee painting the dilemma clearly: “We can’t miss work. We can’t stay home. We are afraid of this disease.”

Just as the pandemic did not stop Smithfield, the severity of the current wildfire season has not bothered farm owners in the West who are left to make decisions about safety on their own. Speaking with the Statesmen Journal in Oregon, Willamette Valley Vineyards director Christine Clair said that she justified calling workers in last week with the logic of speed: “As long as the pick was under a couple hours, we felt okay about doing that,” she said. (It’s unclear who the “we” here is. It does not seem the workers were consulted in this decision.) The EPA considers an AQI of 300 to be “extremely rare,” with common side effects being asthma attacks and heart attacks. Wednesday morning, when Clair sent teams of workers into her vineyards to pick pinot noir grapes, the AQI was at 70. By the afternoon, it had spiked, running between 201 and 300. (She has not scheduled any harvests for this week, she said.)

There has been some modest movement from Democrats to address the harms of the industry: In 2019, California’s OSHA issued an emergency resolution that required employers to supply farmworkers with masks when the AQI reached 151. Hoping to make this a federal law, Senators Ron Wyden and Jeff Merkley introduced the Farmworker Smoke Protection Act following a series of Oregon wildfires in 2018, which would force employers to provide their farmworkers with N95 masks when they are exposed to toxic air. In two years, the only action taken on the bill has amounted to two committee readings.

Then, last December, the House passed the Farm Workforce Modernization Act, which, while not without notable shortcomings, such as a Republican-mandated $1,000 fine for approved applicants, would grant legal employment and resident status to qualifying undocumented farmworkers. As Armando Elenes, the secretary treasurer for the United Field Workers, explained to High Country News, “when you go into negotiations, you want the Cadillac, but sometimes you got to settle for a Chevy.” But even with the concessions, the bill, like the Smoke Protection Act, has spent the past nine months languishing in a Senate committee.

Union organizers, more than government officials, have frequently been forced to step up to ensure that even the most basic needs are being met. Last Thursday, organizers with UFW passed out N95 masks to California farmworkers beneath an orange midday sky. In Oregon, Pineros y Campesinos Unidos del Noroeste Executive Director Reyna Lopez wrote a public letter to Democratic Governor Kate Brown and the state’s Occupational Safety and Health Administration director, asking OSHA to “implement guidance that would create clear instructions to employers for levels of fire smoke with a ‘no work’ policy when cities and counties are at level 2 and 3 during wildfires.”

There are also alternative industry models that attempt to resolve some of the same harms from the other side: As detailed by a recent piece in The Nation, agricultural giants are able to avoid hefty fines and dodge lawsuits for all this heinous behavior by having third-party labor contractor companies step in and take care of the hiring and housing of both H-2A—a federal visa program for seasonal farmworkers—and undocumented workers. Organizations like the Coalition of Immokalee Workers’ Fair Food Program (FFP), founded in 2011, have attempted to create some sense of accountability by conducting routine audits of participating companies, requiring legally binding contracts that hold companies responsible for stolen wages and illegal work conditions, and establishing a multilingual hotline for workers to report sexual harassment. FFP’s success paints a pleasant picture of what farm work should be in America: A well-paid and well-protected profession for all who enter it and a worthwhile career for those who want it.

Meanwhile, people are being forced to pick grapes while the West is on fire. If you’re curious about what accountability down the road might look like: The Trump administration’s OSHA is currently valuing the coronavirus-caused deaths of four workers at a Smithfield plant at $13,494.