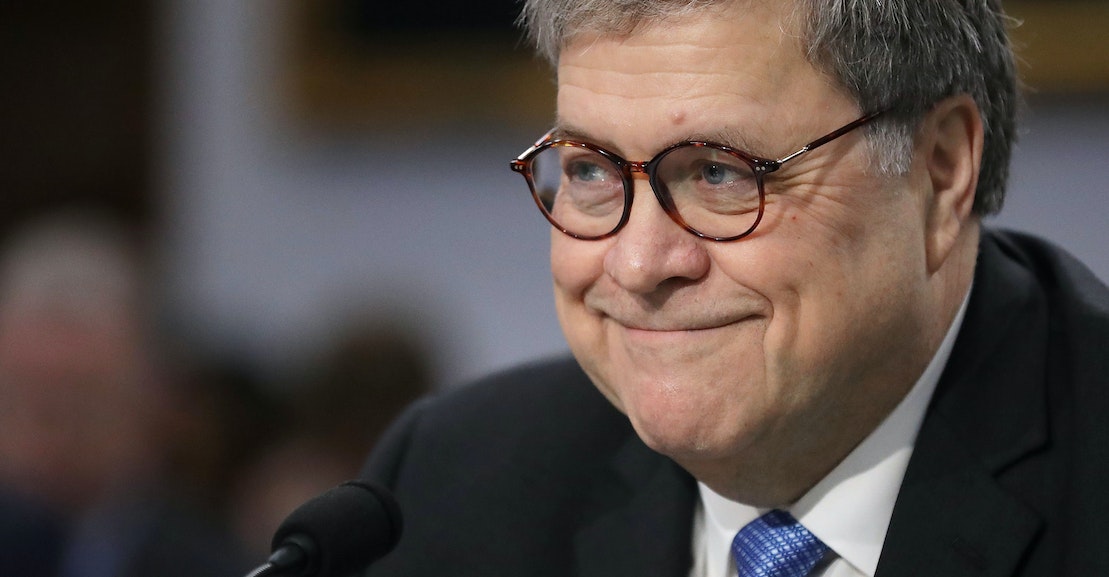 On Wednesday afternoon, The Wall Street Journal and The New York Times reported that Attorney General Bill Barr instructed federal prosecutors last week to pursue harsher charges against alleged rioters. Among his reported suggestions was sedition, an archaic and extraordinary offense that implies the defendants were trying to overthrow the federal government. According to the Times, he also floated possible charges against Seattle Mayor Jenny Durkin over policies she pursued toward protests that took place in her city over the summer.

On Wednesday night, Barr delivered a speech at Hillsdale College on “the Constitution and the rule of law” that doubled as a barely disguised defense of his two-year tenure as attorney general. In it, he criticized unnamed Department of Justice officials for pursuing “fuzzy and manipulable criminal prohibitions that maximize our options as prosecutors” in recent years. “Advocating for clear and defined prohibitions will sometimes mean we cannot bring charges against someone whom we believe engaged in questionable conduct,” he explained. “We cannot let our desire to prosecute ‘bad’ people turn us into the functional equivalent of the mad Emperor Caligula, who inscribed criminal laws in tiny script atop a tall pillar where nobody could see them.”

Such is the nature of Bill Barr, who is either the least self-aware man to ever lead the Justice Department or simply the most deceptive attorney general in American history. He perpetually casts himself as nothing more than a fair-minded servant of the law, dispassionately meting out justice without fear or favor. But his actions—shutting down cases against President Donald Trump and his allies, hinting at charges against his perceived foes, and spreading misinformation about U.S. election systems—conclusively disprove that image. And the worst of Barr’s hypocrisy may be yet to come.

The bulk of Barr’s Hillsdale College speech sought to denigrate Justice Department prosecutors who pursued the Russia investigation and similar cases over the past four years. He implicitly compared them to a praetorian guard “that watches over society impervious to the ebbs and flows of politics,” an allusion to the guard’s historical role in deposing and elevating later Roman emperors. “Smart, ambitious lawyers have sought to amass glory by prosecuting prominent public figures since the Roman Republic,” he claimed. “It is utterly unsurprising that prosecutors continue to do so today to the extent the Justice Department’s leaders will permit it.”

To that end, Barr denounced what he described as a “culture of criminalization” when it came to politically oriented offenses. This critique is striking given Barr’s draconian approach to the rest of federal criminal law. But it makes more sense as a defense of his efforts to shield the Russia investigation’s targets from consequences. He pushed for a lighter sentence for Roger Stone, who lied to Congress about the Russia investigation, over the protests and resignations of line prosecutors. He oversaw an attempt to end the prosecution of Michael Flynn, Trump’s former national security adviser, despite Flynn’s guilty pleas for lying to the FBI. In Barr’s implicit telling, he did not provide leniency to Trump’s allies, he merely shielded them from “head-hunters” in the Justice Department ranks.

At Hillsdale College, Barr complained that it has “become fashionable to argue that prosecutorial decisions are legitimate only when they are made by the lowest-level line prosecutor handling any given case.” But Barr’s critics aren’t concerned with his managerial skills as much as with his apparent eagerness to intervene in cases in ways that could boost Trump’s political fortunes. While attorneys general answer to the president, they are supposed to be ultimately loyal to the Constitution and the rule of law. Barr’s leniency toward Trump’s allies, as well as his zeal to pursue Trump’s perceived enemies, suggests his loyalties lie elsewhere.

Some Justice Department officials have complained, for example, that Barr appears to be hastening an antitrust probe of Google so it can go public before Election Day. He is also reportedly taking a similarly heavy-handed approach to U.S. attorney John Durham’s inquiry into the origins of the Russia investigation. When one of Durham’s top aides resigned earlier this month, The Hartford Courant reported that her departure was partly connected to pressure by Barr to produce public results in a probe into the Russia investigation’s origins before the election. The Justice Department even intervened this month in a defamation case brought against Trump personally by E. Jean Carroll, who accused him of sexually assaulting her in the mid-1990s, shortly after a state court judge allowed it to proceed.

Taken together, these moves suggest Barr is wielding the Justice Department’s immense resources for the president’s personal gain instead of the public good. At Hillsdale College, he appeared to reject the long-held notion that politics shouldn’t play a role in how the department operates. “The most basic check on prosecutorial power is politics,” he said. “It is counterintuitive to say that, as we rightly strive to maintain an apolitical system of criminal justice. But political accountability—politics—is what ultimately ensures our system does its work fairly and with proper recognition of the many interests and values at stake. Government power completely divorced from politics is tyranny.”

What drives this apparent lack of self-awareness on Barr’s part? As I noted in our June issue, Barr is driven by an interlocking series of personal beliefs that make him the perfect bagman for the Trump presidency. He believes in an extreme vision of executive power, free of the post-Watergate constraints and norms imposed by Congress and the Supreme Court. He regards modern American conservatism, shaped by a particular kind of Christian civic theology, as the nation’s only legitimate governing ideology. He sees secularism and the American left as an illegitimate threat to both the republic and to Christianity’s fading role in public life. Most importantly, he thinks the attorney general should play a central role in these culture-war battles.

To that end, Barr does not seem to consider the Democratic Party to be a legitimate opposition force in American political life. “I think we were getting into [a] position where we were going to find ourselves irrevocably committed to the socialist path,” he told Chicago Tribune columnist John Kass last week. “I think if Trump loses this election that that will be the case.” He also forecast dire consequences for the nation under a Biden administration. “Increasingly, the message of the Democrats appears to be Biden or no peace,” Barr said. “That is rule by the mob. And we’re approaching that.”

These views have led Barr to a dangerous place. In the interview with Kass, he once again disparaged the use of mail-in ballots in the upcoming election on baseless grounds, following in Trump’s false footsteps. “There’s no more secret vote with mail-in vote,” he declared. “A secret vote prevents selling and buying votes. So now we’re back in the business of selling and buying votes. Capricious distribution of ballots means [ballot] harvesting, undue influence, outright coercion, paying off a postman, here’s a few hundred dollars, give me some of your ballots.” His freewheeling comments sounded more like those of an uncritical Fox News viewer than of a sober, ethics-minded attorney general.

In Barr’s eyes, however, it’s the Democrats who are actually doing what Barr’s critics allege of him. “You know [how] liberals project,” Barr told Kass. “All this bullshit about how the president is going to stay in office and seize power? I’ve never heard of any of that crap. I mean, I’m the attorney general. I would think I would have heard about it. They are projecting. They are creating an incendiary situation where there will be loss of confidence in the vote.” In a moment of supreme irony, Barr then immediately hypothesized a fanciful scenario where unnamed figures rigged the vote in a battleground state.

“Someone will say the president just won Nevada,” he claimed. “‘Oh, wait a minute! We just discovered 100,000 ballots! Every vote will be counted!’ Yeah, but we don’t know where these freaking votes came from.” His remarks track with the president’s recent attacks on Nevada Governor Steve Sisolak, who oversaw a sweeping effort to expand Nevada’s vote-by-mail system earlier this year, as well as the Trump campaign’s private litigation to stop it. Barr’s hypocrisy also brushed past the inconvenient fact that Nevada’s secretary of state, who will ultimately certify the results of November’s election, is a Republican.

All of these characteristics—a supreme level of self-confidence, an impressive lack of self-awareness, a blithe approach to ethical constraints, and an open willingness to use the Justice Department to advance Trump’s personal interests—are a grim portent of Barr’s future behavior as the nation moves closer to Election Day. While I wouldn’t dare predict the final result in November, it’s hard to imagine that an intense flurry of litigation won’t play a role before and after Election Day. No matter the outcome, Americans can be sure of one thing: Bill Barr will always do the right thing—which invariably happens to be whatever he personally thinks is right.