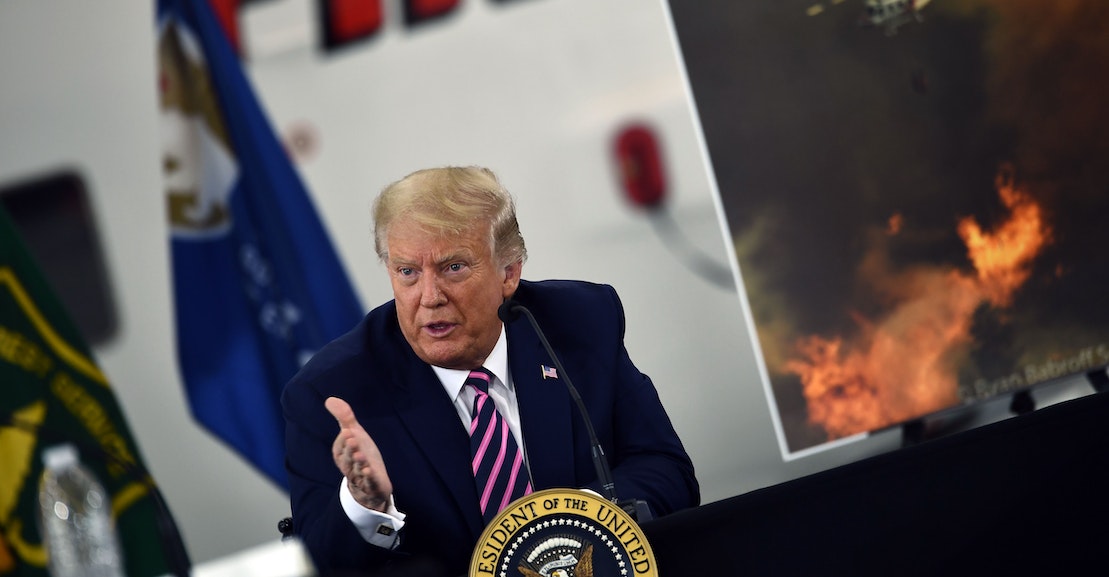 The Republican Party this week is looking like a house divided on climate change: Specifically, it seems split between business interests who want at least the veneer of corporate responsibility and ideologues who think global warming is a conspiracy to make white men feel guilty.

Visiting a burning California on Monday, Donald Trump suggested that the planet will “start getting cooler,” doubling down on a brand of old-school climate denial that he’d recently seemed to be pivoting away from, given that he banned oil drilling off the coast of Florida just a few days earlier. News broke earlier this week that the Trump administration has appointed the prominent climate skeptic David Legates to a senior post at the National Oceanic and Atmospheric Administration. In the broader conservative media scene, Tucker Carlson and Rush Limbaugh have been railing against “environmentalist wackos,” who “want to convince you that your lifestyle choices are the reason why all these fires are firing up out on the Left Coast.” The comments came amid the most active hurricane season since 2005, and after the hottest summer on record in the Northern Hemisphere. QAnon conspiracy theorists, whose crackpot views have gained traction in the GOP recently, with positive shout-outs from Trump and other prominent Republicans, have blamed West Coast blazes on antifa, with “Q” having apparently suggested (falsely) that wildfires were the result of “highly coordinated … domestic terrorism.”

Meanwhile, on Wednesday morning, the Business Roundtable—a big-spending and typically conservative-leaning trade association—announced its support for Congress to pass some kind of “market-based mechanism” to handle carbon emissions, though it didn’t specify what kind; generally, market-based mechanisms refers to either a carbon tax or a carbon trading system like cap-and-trade. It also got behind a goal of “reducing net U.S. GHG emissions by at least 80 percent from 2005 levels by 2050.”

At first glance, then, it seems there’s growing daylight between the business elements of the Republican Party and its more freewheeling base. But the gap between corporate conservatives and conspiracy theorists isn’t as big as the former might like you to believe. Among the Roundtable’s members are the heads of companies (from ExxonMobil’s Darren Woods to Chevron’s Mike Wirth) that have spent years funneling money to climate-denier groups that crafted the lines Trump’s been spouting about the wildfires this week. Whatever their lobbying arms suggest about most oil majors’ token interest in renewables, these companies’ core business model is still actively fueling the problem. Some of the biggest polluters represented at the Roundtable—including ExxonMobil—have nominally backed the idea of putting some kind of price on carbon, maybe, at some point, for years. With the real possibility of a Biden administration on the horizon, the Business Roundtable’s announcement should be understood as a well-publicized hedging of bets.

It isn’t the first time corporate polluters have done this. ConocoPhillips, for instance—whose CEO Ryan Lance sits on the Business Roundtable—was an early member of the U.S. Climate Action Partnership when it launched in 2007 as a coalition between big Beltway green groups and big business. Amid growing public concern about the issue and a tremendously unpopular Republican president, a Democratic administration and some kind of national climate package looked increasingly likely as Election Day 2008 neared.

Savvy oil and gas producers—in addition to GOP nominee John McCain and the handful of Republicans who released dead-end climate bills in the Bush administration’s second term—conceded that global warming was a problem that needed to be dealt with, while aggressively attempting to define and limit the options for dealing with it. The result was a 2009 cap-and-trade bill that—while not without redeeming qualities—would have gutted the regulatory authority of the Environmental Protection Agency. As soon as the proposal lost its wind in Congress, several of the polluting companies this element of the bill was designed to please jumped ship anyway, along with its most prominent Republican supporters.

Let’s assume, momentarily, at least, that this time the magnates of the Business Roundtable are genuinely interested in reining in emissions at the rapid pace that the climate crisis requires. Let’s stretch the imagination on another front, and imagine that their favored carbon pricing mechanisms are the best way to do that. Even assuming all this, the Republican Party that business leaders have been working to craft since the days of the New Deal does not seem interested in any such legislation.

Climate could become an increasingly chaotic problem for conservative elites moving forward. It’s not clear whether big business interests or even the Tea Party insurgents they backed are capable of hemming in the full-blown QAnon conspiracy-theorist wing of the party they’ve unleashed, who, come next year, are almost certain to take up their first offices on Capitol Hill, given a QAnon supporter’s recent primary victory in Georgia. After almost a century of business elites fueling conspiracy thinking about everything from Cold War anti-communism to cigarette smoke to climate denial, they’ve created a monster. Trump is just a piece of it. Some Republicans, at least, seem worried. E&E News’s Scott Waldman reported Wednesday that Trump’s California remarks alarmed GOP strategists, who, like most fossil fuel companies, aren’t interested in straight-up climate denial anymore given how public opinion is shifting, particularly among young voters.

Liberal dreams about some post-Trump GOP have imagined a kind of come-to-Jesus moment on climate, when moderates like Maryland Governor Larry Hogan take the reins and guide the party back toward an allegedly more traditional Republican Party agenda of small government, free markets, conservation, and family values. But since at least the days of the John Birch Society, the GOP has consistently provided a home for conspiracy theorists, foam-mouthed racists, and corporate titans, three groups that have never been mutually exclusive. It was oil magnate H.L. Hunt, after all, who enthusiastically backed the Birchers and gave them a platform, while the National Association of Manufacturers and Chamber of Commerce each funded efforts to cast doubt on the scientific consensus around everything from the cancer-causing properties of tobacco to anthropogenic global warming—strategies that relied on accusing scientific bodies of having suspect, ulterior motives. If the last few weeks’ nonsensical QAnon ramblings of child sex–trafficking rings and antifa arsonists are any indication, the GOP isn’t bound for an about-face on fiction anytime soon, whatever the outcome in November. And as more and more voters seem interested in curbing emissions, the conspiracy theorists who have historically been convenient attack dogs for the GOP’s wealthiest donors may finally be coming back to bite them.

If Biden wins, big business—fossil fuel companies, included—will be eager to shape the outcome of any climate package his administration looks to push forward, while a significant wing of the GOP is likely to recoil at anything that smells like a climate bill, no doubt brandishing some unhinged tales to make their case. For those interested in meaningful climate legislation, the best hope might be a Republican Party divided against itself—and a Democratic Party that knows better than to take any empty promises offered by the GOP’s more allegedly respectable representatives at face value.