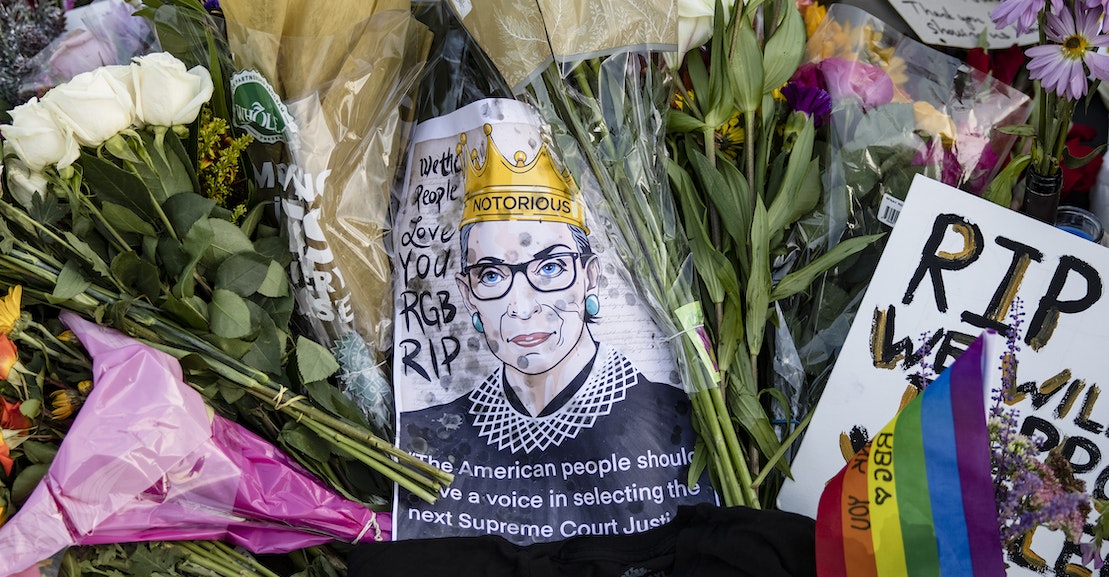 In the last decade of the life of Supreme Court Justice Ruth Bader Ginsburg, she saw herself crowned a feminist icon. The memefication of the precedent-setting women’s rights attorney and judge first took root in 2013, with a post quoting from her dissent in Shelby County v. Holder, the Supreme Court case which helped undermine the Voting Rights Act. “Throwing out preclearance when it has worked and is continuing to work to stop discriminatory changes,” she wrote at the time, “is like throwing away your umbrella in a rainstorm because you are not getting wet.” The character of The Notorious RBG, then, emerged not just in her legal victories, but also, for some women, as a figure of solace in loss—in dissent.

It would be an era that ushered in a lot of such losses. As state after state passed new restrictions on abortion, Roe vs. Wade felt more and more on the verge of meaninglessness. All this coalesced into the towering figure of Ginsburg—literally, she was made into an action figure which raised more than $600,000 on Kickstarter, or, enough money to generously run several abortion funds—as women’s shield from those who would repeal Roe, which itself was held up as the paramount women’s rights concern.

For some time, though, reproductive justice advocates and those working on abortion funds had been sounding the alarm, urging abortion rights defenders to turn their attentions to the states, and to better resourcing the grassroots work of women of color in the places where a slate of new laws had made the right to an abortion, long the purview of privileged white women, little more than an abstraction for poor women. The disconnect between large, national reproductive rights organizations and their (now publicly documented) institutional racism was interconnected with the online media feminist shakeup that produced the RBG meme. This image of Ginsburg was a triumph of branded feminism, and a bid—for some who drove it—to turn away from a feminist reckoning over race and class and entrust their freedom in one of the only women in the United States with a job for life.

What conception of women’s rights, and what kind of feminist movement, might have died with Ginsburg? Fear of the end of legal abortion rightly fuels many women’s mourning, a pre-wake for an idea of Roe as the most significant indicator of the status of women’s freedom. But we still have Roe, now, and yet we are faced with the continued neglect and abuse of women in Immigration and Customs Enforcement detention centers, with the police who kill Black women like Breonna Taylor with apparent impunity.

As tightly as Ginsburg has been intertwined with Roe, it’s as if she ruled on it, or argued it. In the early 1970s, Ginsburg had hoped to bring a reproductive rights case before the Supreme Court herself, and had one: it didn’t involve the right to have an abortion, but the right to have a child. She thought this would sidestep controversy and sexist biases, as she had in the past by successfully arguing sex discrimination cases on behalf of men. The strategy would allow her to make the constitutional argument for women’s rights she had been advancing bit by bit: “The words of the 14th Amendment’s equal protection clause—’nor shall any state deny to any person the equal protection of the laws.’ Well, that word, ‘any person,’ covers women as well as men.”

That was the argument Ginsburg had hoped would secure reproductive rights. But Roe came before she got the chance to make it. “In a lecture she delivered in 1984, she noted the political significance of the fact that the Court had treated sex discrimination as a matter of equal protection but reproductive autonomy as a matter of privacy,” wrote Jill Lepore in The New Yorker in 2018, looking back at this fight. “Roe v. Wade sparked public opposition and academic criticism,” Ginsburg had said in her lecture, “in part, I believe, because the Court ventured too far in the change it ordered and presented an incomplete justification for its action.” As Lepore recounts Ginsburg’s Supreme Court nomination process in 1993, this led groups like the National Women’s Law Center, the Women’s Legal Defense Fund, and the National Organization for Women’s Legal Defense and Education Fund to urge President Bill Clinton to look elsewhere for his first Supreme Court nomination.

Ginsburg, a staunch defender of this basic right, has more recently said that she considers Roe settled and relatively difficult to overturn. Her critiques didn’t seem to be about its precarity, but its narrowness. When she said in 1984 that she wished the Court “had acknowledged a woman’s equality aspect, not simply a patient-physician autonomy constitutional dimension to the abortion issue,” she was doing so in relation to the Hyde Amendment, which prohibits federal funds from being used for abortion except in very limited circumstances, and is one reason why abortion access today is premised on cost and class. If abortion rights were premised, as Ginsburg would have argued, on woman’s equal treatment under the law—an affirmative right to have an abortion—she believed Hyde may have been ruled unconstitutional. The Hyde Amendment has since expanded, and with it, abortion rights have become more or less hypothetical for the millions of people who are denied one, because they can’t afford one, or live in a county where there’s no one to provide one, or, even if they can arrange the costs and travel, can’t have one in the narrow legal window of time some states allow.

All this isn’t to say Ginsburg had an intersectional or third wave understanding of women’s rights before others did—though she was influenced by legal scholar Pauli Murray, who coined the idea of “Jane Crow” to describe Black women’s experience of discrimination based on sex and race, which informed both the Civil Rights Act of 1964 and Ginsburg’s sex discrimination cases. It’s more that her particular and precise legal reasoning sometimes took her there.

“To the end of her tenure, she remained a special kind of feminist, both decorous and dogged,” wrote Nina Totenberg, who befriended Ginsburg back in her early days as NPR’s Supreme Court correspondent in the 1970s. Justice Ginsburg understood herself as a participant in the women’s movement which, as she put it, “came alive” in those years, though she preferred not to think of that work as women’s rights work. “I had legal education, and I could use that education to help move this movement for change, for allowing women to realize their full potential,” she reflected in 1995, two years after she was appointed to the Supreme Court. “It was that ten years of my life that I devoted to litigating cases about, I don’t say women’s rights, I say the constitutional principle of the equal citizenship stature of men and women.” It’s kind of a conlaw way of saying, “I’m not a feminist, but…”

How, then, did Ginsburg—who was seen as having taken a view on abortion rights heretical to the establishment women’s rights groups of the time—get anointed as the “feminist icon” she has now been eulogized as? Perhaps the benefits of a decade’s hindsight on the peak years of the feminist blogosphere and its occasional successful meme-generation will make this clearer to more than the few who called it out at the time. She and Biggie might both be from Brooklyn, but to extend his icon status any further beyond that towards Ginsburg was an obvious sign of the 2010’s establishment feminist myopia. Leadership of the women’s rights project, from Elizabeth Cady Stanton on through Gloria Steinem a century later, has always been disproportionately extended to those who made themselves its chroniclers. The feminist blogosphere of that era narrowly awarded acclaim and platforms. Black women were just as active advancing feminist analysis online in these years; so were queer and trans feminists. It took years for them to gain the resources and recognition that a handful of white women enjoyed for doing work that, it turns out, was far less vital. Black women online identified the rise of far-right, white supremacist activity that others dismissed as trolling or, gross but not politically significant. They were the canaries in the MAGA coal mine.

The meme of RBG carried on through Generation Pussyhat, but has lately shown signs of wear. Slate’s Supreme Court writer Mark Joseph Stern revoked the title after Ginsburg dismissed the racial justice protests of Colin Kaepernick and other Black athletes. Still her champions hung on. When Ginsburg broke several ribs in 2018, it again opened up criticism of Ginsburg for not retiring when it was safer for her to do so under a Democrat. But her defenders, those most invested in the story of Ginsburg as a singular figure, reassured others to stay calm.

The meme was never the big problem with the false idea of Ginsburg as liberal or feminist savior, but it pointed to one—the brand-driven, girl-bossed, leaned-in conception of women’s freedom in which it incubated. Can the meme outlive the woman? Or will it become a relic of a time when we were less free, and one not worth mourning? We should know better after the last decade, too: The unfinished movement for women’s rights is poorly served by rallying around the life chances of one woman in considerable power.