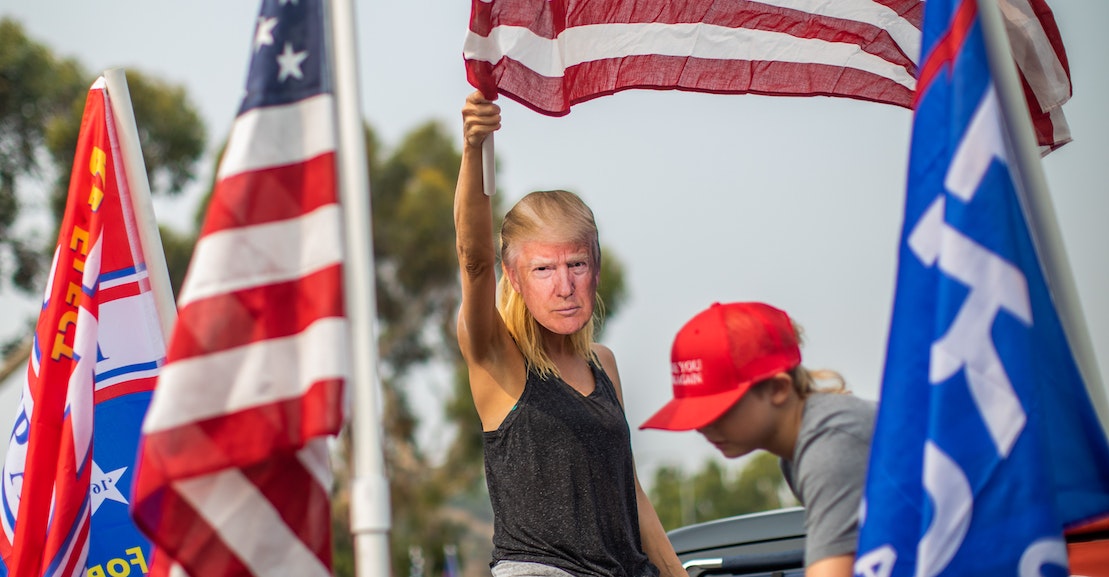 It was in 2014 that the “rolling coal” phenomenon was first brought to our attention. Conservative drivers, a flurry of articles reported that summer, had taken to modifying their trucks to produce comically large and thick plumes of black smoke that were often directed at the drivers of eco-friendly vehicles—a middle finger to not only the environmentally conscious but the Obama administration, environmental regulations, and liberalism broadly speaking. In one piece, Slate’s David Weigel placed the trend alongside other Obama-era displays of political petulance ⁠on the right, from the furor over Michelle Obama’s nutrition initiatives to the campaigns against environmentally friendly fluorescent lightbulbs. “The liberals seem a little surprised that conspicuous consumption—waste, even—could be a method of protest,” he wrote. “They shouldn’t be.”

Liberals also shouldn’t have been surprised to see the attitudes behind those protests carried over into the Trump era. Brian Beutler drew a direct line between the practice and the Trump administration’s moves against environmental regulations for The New Republic in 2017. “The question of whether a policy or personnel choice would piss off liberals has become a disturbingly reliable indicator of what President Donald Trump is likely to do and how Republicans in Congress are likely to defend it,” he wrote. “Trump’s decision to withdraw from the Paris climate agreement—and the way he made it—reflects the rolling-coal mindset of his administration perfectly.”

But the rolling-coal mentality lives on, not only in the Trump administration’s policies and the behavior of Trump himself, but in a right-wing culture that’s sprouted up around him—a culture whose outbursts and performances seem to be taking the place of a traditional political campaign this cycle and that seems certain to endure no matter who wins the election in November.

On Tuesday, a group of anti-mask demonstrators paraded through a Target in Fort Lauderdale, Florida, urging shoppers to take off their masks as Twisted Sister’s “We’re Not Going to Take It” blared from a speaker. A video of their antics has been seen over 30 million times on Twitter. “This is not Communist China,” one protester yelled. “Everyone has the freedom to walk into a store without a mask like Saudi Arabia. This is the United States of America, and we’re here to remind you of that.”

Tuesday was evidently “Burn Your Mask Day,” a social media–promoted event that saw, according to Infowars, “good-hearted citizens torching their government or corporate-mandated face diapers in a show of defiance against the Coronavirus ‘Scamdemic’ threatening the freedom and future of humanity.” It’s unclear how many people actually participated, but the larger anti-mask and lockdown demonstrations we’ve seen across the country over the past several months have regularly drawn hundreds of participants. Earlier this week, a local news report on an August anti-mask protest in Utah went viral thanks to incredulous tweets about how close the demonstrators had come to self-parody. One protester claimed that “child molesters” are fans of the mask mandate; another compared wearing a mask to the chokehold that killed George Floyd: “When George Floyd was saying ‘I can’t breathe’ and then he died, and now we’re wearing a mask, and we say ‘I can’t breathe,’ but we’re being forced to wear it anyway.”

Support for Donald Trump and the Republican Party is as much, if not more, a cultural practice as it is an abstract political stance or a reflection of clear policy preferences.

In general, the anti-mask demonstrations make the huge pro-Trump boat parades of the last few weeks and the conservative vogue for consumer activism—Nike bad, Goya good—seem sane and sober by comparison. But they’re all animated by the same impulse and evidence of the same tendency: Support for Donald Trump and the Republican Party is as much, if not more, a cultural practice as it is an abstract political stance or a reflection of clear policy preferences. The weirdness of it all has been attributed variously to the conservative movement’s long history of conspiratorialism and the reality-distorting effects of social media. But another factor may be the collapse of the religious right. For decades, the conservative movement’s cultural grievances were aired by a network of churches, nonprofits, and advocacy groups⁠—institutions that produced formal leaders and enforced message discipline.

While the fights against gay marriage and abortion have been characterized by extreme rhetoric and action, they’ve also been characterized by a unity of purpose, and they’re animated by a body of ideas and principles that, at least putatively, stand outside of politics rather than an impulse to simply push those buttons that reliably annoy liberals. And although evangelicals view Trump as a defender of the faith, it is inescapably true that his candidacy and presidency have accelerated the replacement of the right’s holy order with a vast secular messaging infrastructure built atop nothing but spite. The preachers are out; pundits, social media influencers, and a bizarre menagerie of out-and-out grifters are in.

Unlike Trump, the right’s cultural sphere can’t be defeated in any real way and might grow even stronger under a Biden administration, just as it did under the Obama administration. This is partially because the forces of reaction are empowered by perceived marginalization and partially because the new culture wars are being driven far less by confused seniors on Facebook than liberals tend to imagine. Trump is fairly strong with Gen Xers and enjoys the support of millions of young people: The ranks of the QAnon candidates and the likes of Charlie Kirk and Candace Owens should assure us that Trumpism and its attendant micromovements won’t simply age away. We can expect more wackiness and, grimly, more violence well into the future; extremists worked into a froth by the new culture wars have killed and will assuredly kill again. Before long, in fact, we might find ourselves pining for a time when the loudest voices on the right only wanted to own the libs.