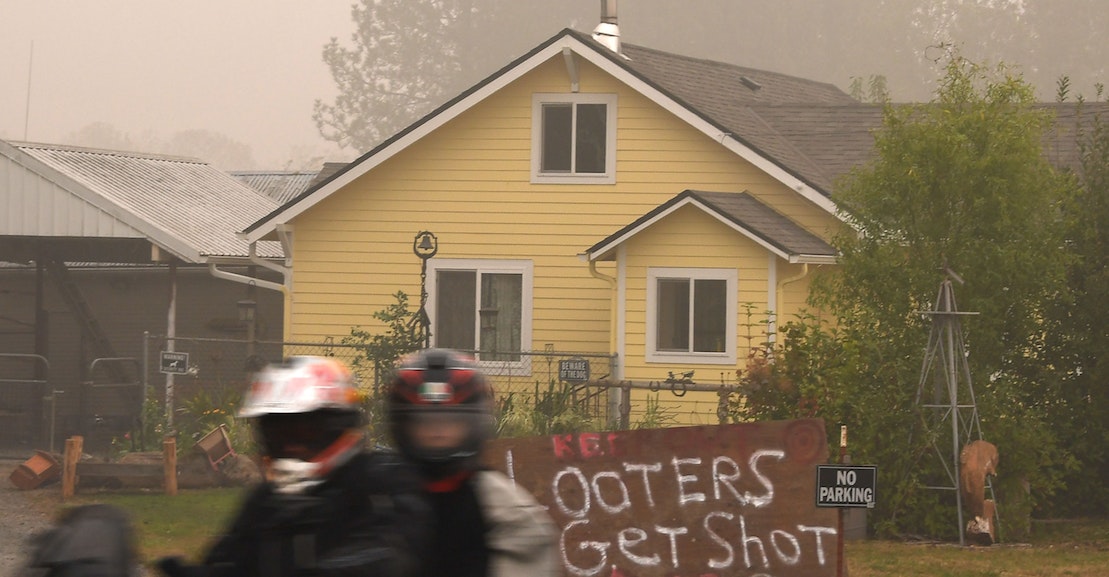 Sunday night, wildfires still had most of Clackamas County, Oregon, under a “level 3” evacuation order—which comes with the guidance of “Go! Evacuate now!”—while the sheriff’s office has been juggling multiple crises. Its sworn officers were seemingly at odds with one another, some promoting unfounded conspiracy theories, like claiming “antifa” was intentionally lighting fires and looting, and others pleading with people who had set up militia-style checkpoints and were stopping drivers they deemed unfamiliar or suspicious at gunpoint, to go home and let them do their job. The county drew national media attention as a hotbed of social media–driven misinformation, serving as yet another example of how plodding those platforms were in the face of dangerous rumors.

But more harrowing is how swiftly militia types and right-wing armed freelancers mobilized in response, as they have in other moments of unrest in Oregon and across the country. Though such activity has drawn more scrutiny in recent months, the groundwork for militias to exploit crises and uprisings has been laid over the past several years, resulting now in mounting paranoia spreading far outside such organized groups, along with the threat of violence.

When corporations and governments turn a moment of crisis into an opportunity, Naomi Klein has called it disaster capitalism. When survival is on the line, they have learned, people may be willing to go along with what they may not otherwise. The same dynamic is useful to those in much smaller, more extreme formations, like militia groups, who see disaster as a chance to change public perceptions of themselves—that they’re not racists with guns, but defenders of “law and order.” In a crisis, they can act out and gain ground.

Oregon journalist Alissa Azar helped put the militia activity on the national radar while out covering the wildfires in Clackamas County on Thursday. In the photos she posted to Twitter, the abandoned properties and emergency vehicles were all filtered through a poisonous amber haze, smoke hanging in the air. With her were two other journalists, Sergio Olmos and Justin Yau. Azar posted later that afternoon, “We got 3 guns pulled on us at a militia style checkpoint … none of us are white.” A few minutes later, she added, “We’re safe. It’s scary knowing there are people who legitimately think ‘antifa liberals’ are setting these towns on fire … we are very clearly documenting and interviewing folks. Our pictures were taken and so was the car and license plate.” As people fled their homes, the phantom threat of antifa arson and looting and the very real presence of an armed response emerged together.

These violent fantasies are not unique to this era of massively networked disinformation, of Trump and QAnon, the pandemic and its attendant moral panics over masks and vaccines. The Oath Keepers, “today’s Blackshirts” as Casey Michel described them in The New Republic, was founded in 2009, in response to the election of President Barack Obama.

“The real goal of these militias,” a Southern Poverty Law Center profile of the group states, “is to prey upon the fears and concerns of local communities and revitalize the American militia movement, all under the guise of neighborhood watch and self-sufficiency.” The group’s “citizen preservation” militias were a key feature. In Ferguson, Missouri, members showed up ostensibly to protect businesses during the uprising over police killings—and in the process, intimidated protesters.

The citizen preservation militias now go by the more anodyne title “Community Preparedness Teams,” a deliberate part of the Oath Keepers’ base-building efforts and attempts not to look like a militia group. “In Oregon, the Oath Keepers have been building a grassroots movement, partly based on community service work and the creation of emergency-based response teams,” according to a 2016 report by Political Research Associates, who monitor far-right groups, and the Rural Organizing Project. The national Oath Keepers leadership promoted the Oregon chapter’s service approach, with founder Stewart Rhodes encouraging members to join, in their own communities, “volunteer fire departments,” “neighborhood watch groups,” and “search and rescue and other first responder groups.”

Making these inroads into community service has paid off in Oregon. In 2017, the Multnomah County Republican Party voted to use the Oath Keepers, along with another far-right group, the Three Percenters, as its own private security. The party chair said it was to protect them from “antifa.”

While law enforcement agencies, from the FBI to local sheriffs, attempt to get the public to put these antifa rumors and militia responses to rest, their own members have been just as susceptible. In an emergency Clackamas County Board of County Commissioners meeting last Thursday, Captain Jeff Smith, a 25-year law enforcement veteran who has represented the county sheriff’s office on a Homeland Security Taskforce, claimed there were “reports” of “extremist groups—and it’s not confirmed antifa, but suspected antifa” trying to “start further fires.” One member pushed back, almost bemused, saying it was “some media thing” and hadn’t been confirmed. Smith claimed again that there had been “reliable sightings” of antifa.

The sheriff’s office representative was making these claims to county officials on the same day the three reporters were stopped by an armed militia. That kind of threat was not mentioned. A Clackamas County deputy was recorded in a video time-stamped that day—September 10—saying much the same thing, but his riff was more profane. “Antifa motherfuckers are out causing hell,” deputy Mark Nikolai said. “There’s a lot of lives at stake.” He was later put on leave.

As some members of law enforcement put down rumors and conspiracy theories, others are helping to drive the militias’ narrative for them—though it is not unique to them. This idea of antifa comports with the terrifying vision of the country played on repeat just a few weeks ago at the Republican National Convention, a promised disaster. Trump continues to rail against antifa, while his administration suppresses reports showing the actual threat posed by far-right extremists. Perhaps the idea of a militia coming to save good Americans from anti-fascists while their town burned down around them is meant to seem less insane with the actual horizon on fire. It is not.