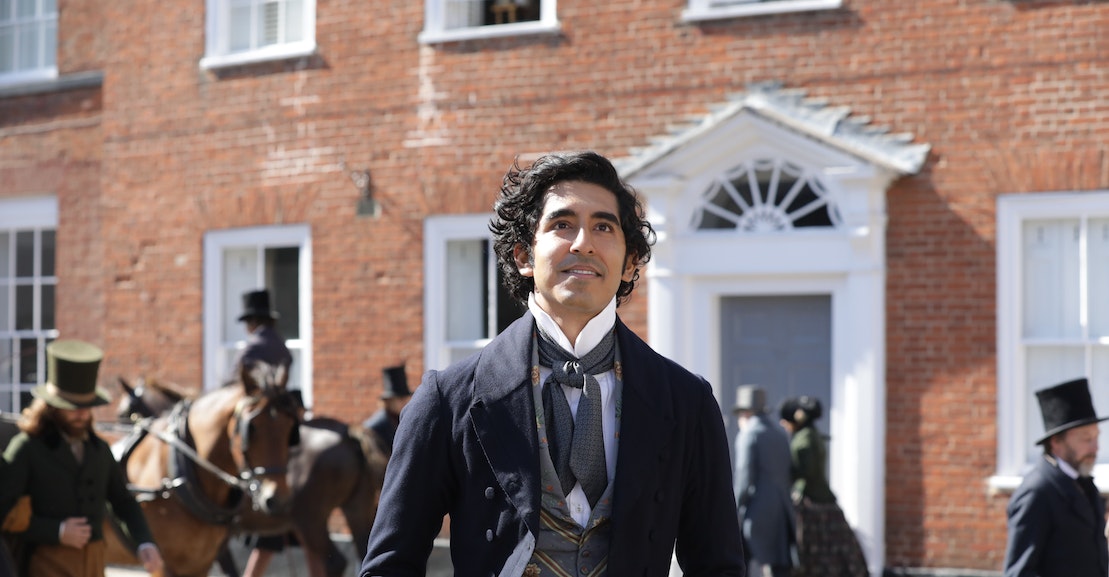 Critics rarely recommend movies their readers have little chance of seeing in the near future. Nonetheless, you can only watch Armando Ianucci’s new film, The Personal History of David Copperfield, by physically going to a cinema—something a New York–based professor of medicine recently likened to “Russian roulette” during a pandemic like ours. It is a disappointing situation but also fitting, since contagious respiratory illnesses are such a hallmark of the nineteenth-century English novel. From Jane Eyre’s friend Helen Burns dying meekly in the school’s “fever room” to the pale-cheeked Smikes who expires passively on “a fine, mild autumn day” in Charles Dickens’s Nicholas Nickleby, these books are crawling with illnesses like cholera, diphtheria, and tuberculosis.

Dickens himself wrote from the 1830s to 1870, meaning that his career ran parallel to a number of serious outbreaks of disease in London, including the particularly wretched Third Cholera Pandemic of 1846–60. Those conditions are borne out in Dickens’s fiction, which is filled with death of all kinds (murder, drowning, and in once case spontaneous combustion). There’s even a chart available of his body count per novel.

The Personal History, Adventures, Experience, & Observation of David Copperfield the Younger, to give the book its full title, was Dickens’s favorite of his works. It begins with the sentence which best captures the soul of the nineteenth-century Bildungsroman: “Whether I shall turn out to be the hero of my own life, or whether that station will be held by anybody else, these pages must show.” Our narrator-hero goes on to tell a story in two halves, first recounting his loss of innocence in childhood, when his evil stepfather exiled him from the family home to labor in a London bottling factory. In the second, David rises up the social ladder to become a proctor of law. He makes a glorious jumble of friends of all social stations along the way, including the lobster-people of Yarmouth and arch school chum Steerforth.

There are few sick people in this story, and an unusually high proportion of the novel’s deaths are caused instead by drowning (as one sailor puts it, “There’s a lot of drowning goes on”). But there’s a reason that Dickens suddenly veered away from writing peaceful deathbed scenes à la Smikes: In 1848, his own sister Fanny, whom he loved dearly, died of tuberculosis. In a letter to his wife, he wrote, “No words can express the terrible aspect of suffering and suffocation—the appalling noise in her throat—and the agonized look.” Having witnessed it in reality, Dickens was no longer able to romanticize pulmonary distress. The January after Fanny died, Dickens’s first son was born, and he began writing David Copperfield.

As a result, perhaps, of all that suffering being followed by new life, David Copperfield is a story exploding with vitality. David grows up across its pages, as if his very biological growth were pushing the story forwards, while each of his friends, mentors, and enemies runs on their own similar momentum. The new film adaptation, co-written by Iannucci and Simon Blackwell, takes that human energy as its lifting-off point, and is simply too faithful, rich, and bright to be dimmed by the circumstances of its release.

Iannucci stages the book’s opening literally, by having the adult David leap onstage to celebrate the publication of his own memoir in a theater, in front of all his friends. Then we immediately flash back to meet the adorable Ranveer Jaiswal as David aged 4-7, and Dev Patel as the hero from adolescence onward. The scenes come thick and fast, with an overstuffed feel. Standout performances come from both Davids as well as Tilda Swindon as aunt Betsy, and Daisy May Cooper as David’s loyal and hilarious nurse Peggotty. Amid a strong selection of the hardest-working actors in Britain (Benedict Wong, Gwendoline Christie, Nikka Amuka-Bird), Hugh Laurie shines as the odd Mr. Dick, dotty cousin and dependent of Betsy, who can never get down to writing his bill to improve housing conditions for the poor because the thoughts of King Charles II have taken up residence in his head.

In some of the film’s most touching scenes, David helps Mr. Dick relieve himself of Charles II’s burdens by attaching his notes to a kite and flying them high. “The sky is absorbing my thoughts!” Laurie trills, happy at last. Mr. Dick forms a kind of light/dark dyad with Uriah Heep, the obsequious servant who rises to power through evil scheming. It’s the role Ben Whishaw was born to play, his intense acting style turning Heep’s sarcastic bowing habit into a balletic expression of hatred.

In his bottling-factory years, young David teams up with a Mr. Micawber, the grandiloquent charlatan with a heart of gold played to his absolute maximum by Peter Capaldi, an old collaborator of Iannucci’s beloved for his performances in The Thick of It and In the Loop. The pair meet after Micawber collars the boy and asks him to divert the attention of his creditors. To little avail: Even inside his house, an unseen man’s hand yanks an upright clock offscreen through the window. The smallest of the Micawber brood glides away in his baby carriage, because the bailiff is dragging the hallway carpet out from under the front door.

As he grows, David’s mind becomes a sort of patchwork of the people who have raised him, from Micawber to Peggotty’s brother’s adopted children. Iannucci shows David collecting bits and pieces of the script in a little tin box, with odd phrases (“In my factory, pistons nodded like mad melancholy elephants”) appearing on the screen in writing.

David Copperfield becomes a love story when he falls for his boss’s daughter, Dora, a ringleted simpleton who will communicate only through her small dog, Jip. She has to disappear in order for David’s longtime friend Agnes to come to the fore, revealing herself as his true match all along. In the novel, Dickens doesn’t specify what’s amiss with Dora, only noting that she wastes away and eventually dies. In the new film, Dora stands over David’s shoulder as he writes down his memories, and points out that she “doesn’t fit” with everything else. “Write me out,” she asks. If Dickens couldn’t bear to put another character through what Fanny had suffered, Iannucci goes one further: he doesn’t suffer her to die at all, as if gently relieving Dickens’s fiction from the burden of having to deal with disease.

Ianucci’s Copperfield would seem to have little in common with the other buzzy movie adaptation of a nineteenth-century novel to come out this year—Autumn de Wilde’s Emma. If Dickens’s body of work is a virtual charnel house, Jane Austen is famous for never killing off a single major character. She died of a much-debated disease at the age of 41, in 1817, having written the six novels that would make her famous, all light-filled masterpieces where the fear of catching cold outweighs its actual dangers.

Released in February of this year, just as the pandemic was blooming across the United States, de Wilde’s Emma was one of the last theatrical releases to enjoy strong numbers at the physical box office. Starring Anya Taylor-Joy in the titular role, the film follows the privileged young Emma Woodhouse in Regency England as she interferes with other people’s lives, matchmaking them with varying degrees of success while floundering in her own love life. On the face of it, it’s a wisp of a story, without much in the way of death or destruction to turn it into a drama. But Austen’s genius lay in turning one girl’s interior world into the whole universe, and transforming the pettiest of social interactions into microcosms with global moral significance.

De Wilde’s Emma is highly stylized, with the heroine’s family home, Hartfield, decorated in candy-colored pinks and blues, like a gigantic cake for a little girl. But the themes are, like David Copperfield’s, powerful under the surface: When Emma toys with the marital hopes of her new friend Harriet, whose paternity is at first unknown, she thinks she is dabbling in romance but in fact is altering her protégée’s prospects in life dramatically. As with David’s stepfather, who throws him out of the house, all the money in Austen’s world is controlled by men, and that big pink cake of a house is only Emma’s by chance of birth.

Everything is chance, disease teaches. In the early nineteenth century, they didn’t even know where it came from. On the wind? In the water? On the rats? Austen was chronically unwell herself, but shut sickness out of her fiction. Dickens was fascinated by death, and approached it in a thousand different ways, but perhaps none are so touching as his tenderness in David Copperfield, where he focuses so hard on life that death, with the exception of a devastating funeral scene for David’s mother, barely gets a word in edgeways.

It’s small wonder, then, that these jewels of English fiction would sparkle with such special brightness now, in a time of pandemic disease. Like Dickens in the spring of 1849, we’ve been traumatized by so much death, but life marches on inexorably. It follows that the fictions we want most are the ones that exclude death, even artificially, and focus instead on growth and experience.

Both Emma and David Copperfield are stories about children turning into adults, and both are told from the perspective of human beings who are made extraordinary by the telling of their tales. Despite their smallness, these are flawless, self-contained, and fully resolved emotional universes. Crucially, by the novels’ ends, both heroes’ experiences turn out to mean something. In the light of the pandemic, whose reverse-Midas touch has melted all that we thought was certain into air, these stories seem like instructions for how to build a life in the face of death. In his rich and personable voice, Dev Patel closes The Personal History of David Copperfield by musing on how “loss and love live side by side,” and answers the question with which he began: being the hero is the same thing as telling the story.