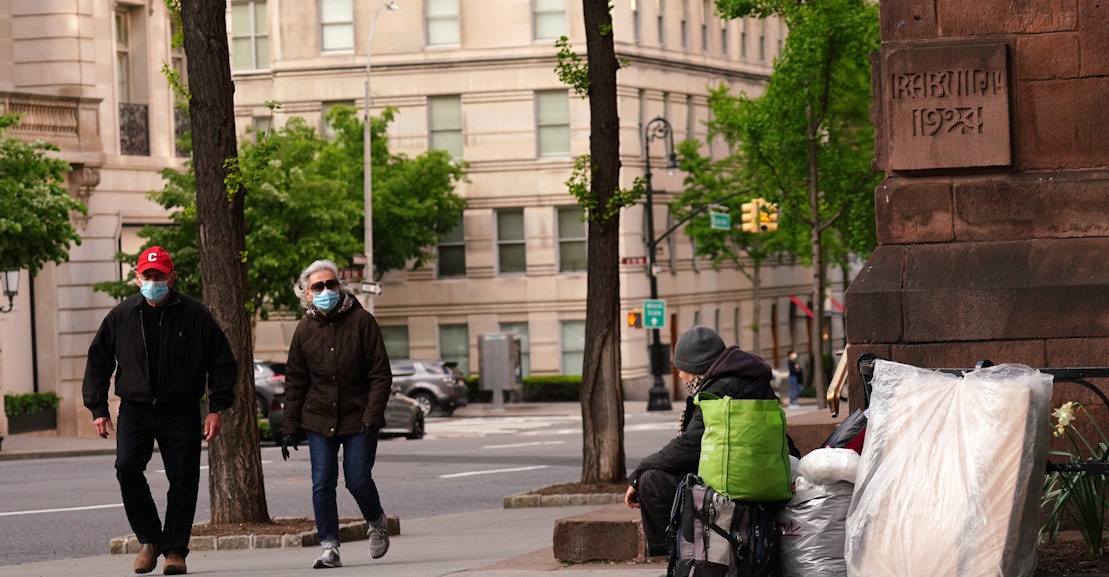 The West Side Community Organization describes its mission as twofold: to “advocate for a restored quality of life for residents, visitors, and the small business community” and “advance safer and more compassionate policies regarding New Yorkers who are struggling with homelessness, mental illness, and drug addiction.” As its first official order of business, the hastily assembled 501(c)4 launched a slick campaign to vilify 300 unhoused men in its Upper West Side neighborhood as dangerous criminals, then succeeded in evicting them from the hotel the city had converted to temporary housing in response to the pandemic. Apparently it was the $123,000-median-income families of the liberal Manhattan neighborhood who were the real New Yorkers struggling with (the sight of) homelessness.

Now the men will be going somewhere else. According to The New York Daily News, the city is in the process of relocating other unhoused people, many with disabilities, from a Midtown shelter in order to make room for the newly placeless former residents of the Upper West Side. In a statement on the city’s relocation decision, the organization’s attorney Randy Mastro called it “a testament to community organizing.” The group that came together under the banner of WSCO had started out as strangers, he continued, but came together as a stronger whole “dedicated to saving their neighborhood.”

The inviolable power of private property defines the actions and attitudes that can create and destroy communities; in liberal enclaves like New York, this is done with language. Slippery terms like neighborhood and community are quietly and expertly carved out to exclude the people—nonwhite or ill or poor—who reduce property values. Evictions driven by wealthy residents and property owners become actions taken for the community, and for neighbors, rather than against them. The community “came together” rather than was torn apart. By cloaking the language of profit in the language of safety, these efforts are able to write out the poor and unhoused—those for whom the city is the most hostile and unsafe—from these most basic human identities.

One member of the neighborhood Facebook group that became WSCO told The New York Post that “our community is terrified, angry and frightened.” Their fear was “palpable.” Another resident who opposed sharing her neighborhood with unhoused others asserted that “we’re a progressive-minded community and we tend to be sympathetic to the homeless, but with sex offenders, draw the line.”

Elsewhere in New York, a woman whose neighborhood also saw an influx of unhoused people during the pandemic claimed that she never left her house without pepper spray. The founder of a civilian patrol group complained of “all kinds of chaos … assaults, vandalism, breaking and entering and lewd behavior.” More than 160 business executives wrote to the mayor that “there is widespread anxiety over public safety, cleanliness, and quality-of-life issues that are contributing to deteriorating conditions in commercial districts,” demanding a restoration of the “security and the livability of our communities.” An Upper West Side petition declared, “This situation is making life uncomfortable for residents and putting families, children, and the elderly in harm’s way.”

Those words and identities are not literal or geographical. A resident of a neighborhood in these tellings is not—can’t be—someone who lives in a shelter in that neighborhood.

The language that this nonprofit, and Nimbyism generally, uses is so smooth that reading their literature sometimes makes it sincerely difficult to tell whose side they’re on. Not only did WSCO express concern over the safety of the wealthy residents apparently threatened by the sight of poverty and addiction, but it also insisted that the hotel was not a safe place for these men themselves, who needed the professional services offered by the shelter system. Its language of danger—and concern—was expert. “These individuals are not receiving the critical social and mental health services they so desperately require,” it writes in its fundraising appeal.

This is a laughably paternalistic claim; the well-being and basic needs of unhoused people is clearly not the real concern of these wealthy Upper West Siders who so blatantly attempted to criminalize them. WSCO’s GoFundMe raised over $50,000 in its first two days. It now has over $137,000. It will use these funds, it has informed its donors, to retain lawyers and press people, cover administrative costs, and explore options around private security.

It is typical of respectable liberal discourse that any talk of homelessness is really talk of those affected by others’ homelessness. (Earlier this summer, the Times published a 1,769-word report on the homeless encampment at Powderhorn Park in Minneapolis, out of which 71 words were dedicated to an actual resident of the encampment and the rest to the housed people around it who were coping with this struggle with varying shades of gallantry or concern.) The bullshit liberal politics of decency dictate that to believe in a mechanized and fully functioning system is to acknowledge that homelessness does exist—and we care about it!—but that it has to be dealt with somewhere else where we don’t have to look at it. Then a global pandemic happens and suddenly we are forced to look at poverty, and it appears there is a malfunction in this system, so we start short-circuiting as well, and demand to speak to the manager.

Luc Sante, author of Low Life: Lures and Snares of Old New York, lived on the Upper West Side in the 1970s and remembers a significant enough class difference within the neighborhood then—rotating Columbia students, residents of welfare hotels, cult groups—but never felt a sense of threat. “They spent their days on the benches in the traffic islands on Broadway drinking, perfectly benign,” he told me. (And then, as now, there are many housed residents of the Upper West Side who have organized against the eviction and in support of the unhoused residents.)

Property ownership in such an expensive city changes a relationship to a home, forcing questions about a return on investment and what money is meant to secure you. “It’s not about threat,” Sante said of what’s changed in the ensuing years, “it’s about property values. In those days, it wasn’t that expensive to live on the Upper West Side.”