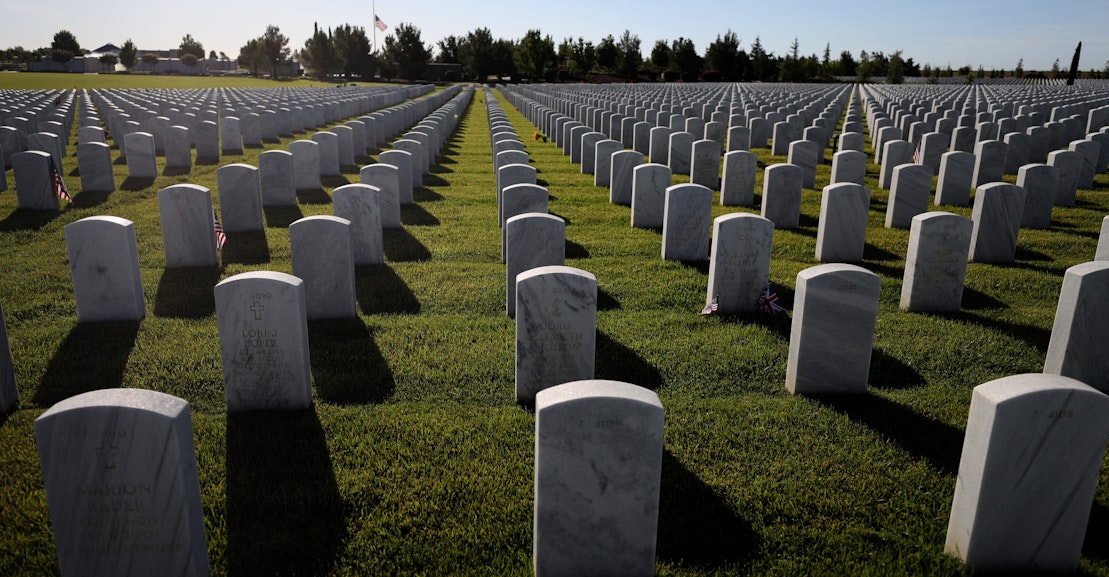 If one thing is clear about American history and politics, it is this: The United States has never honored the idea that everyone is created equal. It has never valued every human life the same, and it’s hard to find a better recent reminder of this than the coronavirus pandemic, in which poor people of color have been more likely to be exposed, more likely to lose their jobs, and more likely to die. There are large groups of people about whom this country simply does not care, and there is not much hope that November’s election, however it shakes out, will represent the end of this shameful period.

Today, we will watch as Joe Biden and Mike Pence offer their versions of September 11–themed mourn-pomp as they “cross paths” in New York City. We will also spend another day hearing news about the immediate impact of the pandemic’s explosion, as it disproportionately affects people of color and the poor. Further tragedies await us in the weeks, months, and years to come, in which the disparate impact of this crisis will persist and widen those ever-greater economic gaps between rich and poor. But it will affect bodies, as well. It is too soon to know exactly what the long-term health impact will be—it is, after all, a novel virus—but it’s clear that there will be ongoing problems for some people who have had the virus, many of whom had symptoms for weeks on end. We do not know if lung scarring from the disease will be permanent, or if these patients will continue to be at higher risk for blood clots and strokes. The most recent thing we’ve learned about the virus is that we don’t have any idea what it’s doing to our hearts.

At least a third of college athletes who had coronavirus have myocarditis, an inflamed heart muscle, and a German study of 100 recently recovered coronavirus patients, most of whom recovered at home, found that 60 percent have ongoing myocardial inflammation. One third reported “ongoing exhaustion.” Many patients have exhibited neurological symptoms, such as confusion and delirium, which may have devastating long-term effects that we barely understand, and new evidence suggests the virus can enter the brain itself. The BBC noted in June that survivors of twentieth-century flu pandemics experienced a kind of lingering depression that left them “in a state of suspended animation”; Oliver Sacks described these sad patients as “insubstantial as ghosts, and as passive as zombies.”

Try to imagine how a health care system that is already awful, not to mention prejudiced and unequal, will handle this influx of newly burdened people. We are already very bad at preventing illness, and preventing deaths from those illnesses, compared to other countries. We have far more obesity, leading to complications like diabetes and heart disease. We also have hunger, which, contrary to the childlike assumptions of callous conservatives, is not a paradox: It is very possible for people to be both malnourished and overweight. And now think of how coronavirus has spread among the poor, people who are already less likely to have health insurance or be able to afford to see a doctor, as well as being more prone to such conditions.

These people will be less able to weather the long-term physical effects of the virus—if we don’t do something about it—but also the mental health effects. Such problems are already affecting Black and Latino people more. The state of mental health access in this country is a complete joke, an utter disaster, even for people with insurance. People will suffer and die without being able to see therapists, as they already do. In June, a quarter of young people reported experiencing suicidal thoughts in the last month.

People who suffered worse effects from coronavirus, who were more likely to already have preexisting health problems, will suffer even more in the future—and we do not have a system to handle it. Not even close. Health insurance companies can’t even handle covering bills for their customers that the government mandated they pay, and those are the lucky ones who have insurance. It is guaranteed, as inevitable as the heat death of the universe, that insurance companies will fail to cover costs for people whose brains or lungs or hearts were damaged by Covid-19, by a virus that our government allowed to spread, wantonly, through the population. (With Medicare for All, there would still be people whose access to a doctor is not as good as your average millionaire’s, but there would be far, far fewer, and it would at least take out the unnecessary step of having someone in an office in Minnesota decide whether your test in Kentucky was covered—and getting it wrong.)

Is there any help on the horizon, any sense that we might avoid this unnecessary pain? Is it a coincidence that the moment the divergent impact of the virus became apparent, the political choices shifted hard in the direction of “reopening” the country and “saving” the economy, instead of people? It would certainly be shocking if this case represented the first time we broke away from the terrible pattern of devaluing certain lives. America has always valued the lives and work of rich, white, American men more than every other class of people; there have always been groups of people whose lives and deaths are treated as simply less important.

We send our Honored Troops abroad to die, in pointless forever wars; not only are the lives of those we kill abroad forgotten, but their deaths are explicitly justified as “worth it,” even when they are children. Corrupt police are given a license to kill and to edit major newspapers, which will dutifully obscure their victims’ lives in a shroud of passive voice. And then there are deaths that are just a permanent fixture of American life: the homeless people who freeze on winter nights; the mass (and regular) shootings that simply pass us by; the “diseases of despair” like opioid deaths and suicides; the deaths caused by lack of health insurance, or by pollution, or by malnutrition; tragic deaths that happen quietly in unregulated nursing homes.

This isn’t a recent phenomenon, nor is it obscure, and it has always been particularly brutal for people of color. Their treatment at the hands of the U.S. has historically ranged from “actively trying to murder you” to “passively trying to murder you.” The genocide of Native Americans. Experimentation on Black people. Internment. Redlining. These stories are as American as the signing of the Declaration of Independence or Johnny Appleseed. The prevalence of preventable illness among Black people in the Deep South, where amputations from vascular disease occur more in the same places that had higher concentrations of slave populations 160 years ago. The predominantly Black town in Louisiana where cancer rates are 50 times the national average, thanks to a nearby chemical plant. Poison water in Flint. This is all happening today, in America, and is not inevitable, the product of some divine plan: These are things that could be remedied by government action, but aren’t.

And though America is always worse to people of color, the neglect affects white people and their communities, too—if they’re poor. Opioids kill people of all races, but this is one area where white people have largely fared worse than Black people—perhaps, sickeningly, because the racism of the medical system prevented Black people from being prescribed the deadly drugs in the first place. The collapse of rural health care. Black lung among miners. Whites may be better off than Black people overall, but their race is not a guarantee that the government will give a shit if they live or die. Life expectancy is almost as bad in parts of Appalachia as it is on some Native American reservations—you know, the people we really tried to kill.

Just two years ago, a hurricane in Puerto Rico killed at least as many people as died on 9/11, and our government’s response was pathetic. The help provided has never come close to matching the need: As of July, the “first major program to rebuild houses hasn’t completed a single one even though tens of thousands of homes still have damaged roofs nearly three years after Maria,” according to NBC. Such neglect might be familiar to people in North Carolina or Texas, where people who had not yet recovered from one hurricane were upended again by another just a year or two later. As Jon Schwarz pointed out, the disparate responses to 9/11 and the coronavirus pandemic show that “reality often has nothing to do with gigantic government actions.” But it’s more than that: It’s that the scale of human suffering in America does not translate to government action, depending on who’s suffering.

The reason that these unnecessary illnesses and deaths happen is because choices are made, politically, to cause them instead. This can look like money that didn’t get allocated, or oversight that went missing or was never there. But at the root of all this mayhem is the simple, persistent political decision to preserve the systems that keep some people down and some people up—systems that demand “essential workers” be exposed to a deadly disease that they get to unwittingly bring home to their families, while inessential health insurance executives enjoy their mansions and yachts.

And so we return to national politics and the notion that the coronavirus pandemic is looming large over the presidential election. Certainly, there is a great chasm between how Joe Biden promises he would address the pandemic and the barer-than-minimum response pursued by Trump. But as Helaine Olen noted this week, the actual specifics of health care policy have been strangely absent from the campaign, despite this being a crisis of health. No one seems sure what Biden actually intends to do, particularly given his loose grasp on the issue, and health care certainly doesn’t occupy a front-and-center role in his campaign messaging, which is much more about decency and feelin’ fine again.

This is a recipe for disaster, for Americans who desperately need help and for a party that is determined not to accept the scale of change that is needed. And it is also going to mean the people who have been most affected by Covid-19, whose bodies will be battered and broken, will be left behind once again. If we do not provide health insurance to every American—coverage that is actually usable, expansive, high-quality—we are accepting more unnecessary deaths of poor people. But then, this is what we have been doing for years. The recipe has been perfected.

It has been clear for a long time that people who were doing pretty well before all this have a good chance of continuing to mostly do pretty well afterward; they might even have more money or be able to buy a house at rock-bottom interest rates. People who were already struggling are going to struggle even more. If past is prologue—in fact, if we don’t make radical and far-reaching changes as soon as possible—this struggle will be ignored. It will be just another thing that makes life for the poor intolerable. As Ed Yong recently wrote for The Atlantic, widespread Covid-19 threatens to become “yet another unacceptable thing that America comes to accept.” It would be far from out of character for America to shrug and turn away as more people needlessly suffer and die for years to come; it would be as American as can be.