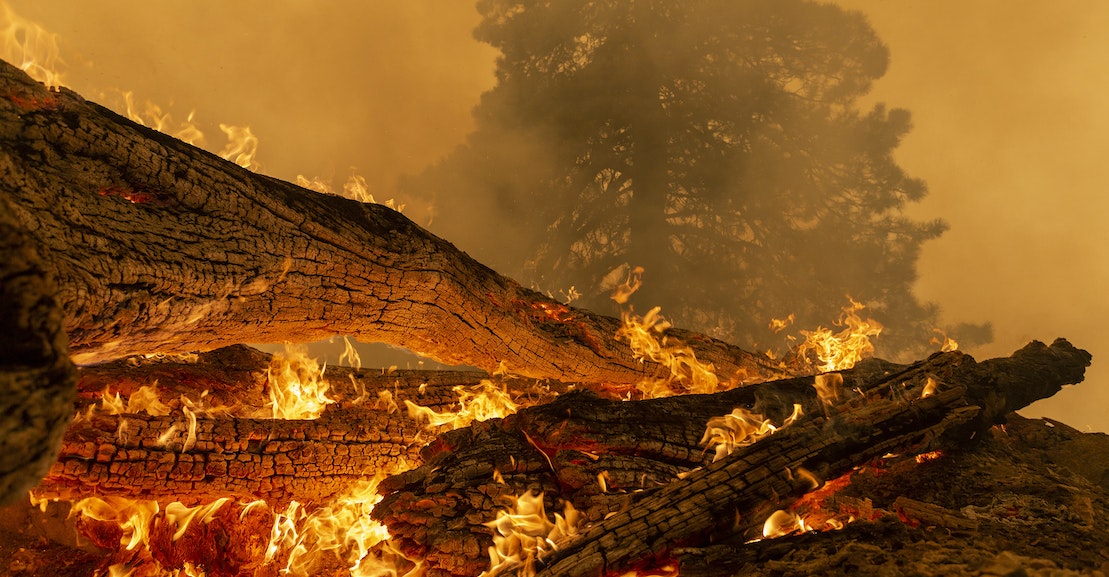 I spend a lot of time writing about what President Donald Trump says. But sometimes I have to write about what he’s not saying: In this case, he’s saying virtually nothing about the wildfires engulfing the Western United States right now.

At least 15 people have died so far in the ongoing seasonal blazes across the West Coast, while hundreds of homes have been destroyed and millions of acres have burned. As a series of wildfires in northern Oregon merge and move toward the outlying communities surrounding Portland, things stand to get even worse. And while the worst fires are in California, Oregon, and Washington, every state west of the Rockies has been affected. Even in communities not directly affected by the fires, clouds of smoke have lowered the air quality to dangerous levels.

The White House hasn’t completely ignored the ongoing crisis. The administration quietly approved disaster declarations for California last month and Oregon this month, freeing up federal funds for relief in those states. But the president himself is quiet on the disasters themselves. The Washington Post found no references to the wildfires in any of Trump’s recent public remarks and noted that the Oregon disaster declaration was even announced by a member of Congress, not the White House itself.

Trump’s personal Twitter feed is similarly devoid of any words of comfort or consolation for those affected by the fires, even as he warned of dire consequences should he lose the November election. “If I don’t win, America’s Suburbs will be OVERRUN with Low Income Projects, Anarchists, Agitators, Looters and, of course, ‘Friendly Protesters,’” he wrote on Twitter on Thursday, as flames overran at least two small towns in Oregon, leaving mostly ashes in their wake.

Trump is not wholly alone when it comes to underappreciating the impact of Western wildfires, of course. Most of the nation’s political and media infrastructure is located in New York City and Washington, D.C., so matters affecting the East Coast receive a disproportionate amount of attention in the public sphere. Indeed, it’s telling that perhaps the most prevalent images in American climate discourse are of superstorms that might hit the Gulf of Mexico and the Eastern Seaboard in 20 years, not the blazes that annually ravage the West right now. The New York Times’ Charlie Warzel noted earlier this week how his own perception of the annual fire season changed dramatically when he relocated from the East Coast to Montana, a few years ago.

“Since I moved West, I’ve been preoccupied with this question: Would Americans feel a greater sense of alarm about our rapidly warming planet and the disastrous, perhaps irreversible effects of climate change if everyone could experience a fire season in person?” he asked. “Would cable news hosts devote the same nonstop coverage to fires as they do for hurricanes if more of their executives woke up each morning to falling ash? Would more lawmakers care if it looked like this outside the Capitol at high noon?” As a Westerner who moved east in 2013, I have no doubt that the answer to each of Warzel’s questions is yes.

Even in that context, however, Trump’s disinterest is exceptional. When fires ravaged California in 2017, Trump drew the ire of state leaders and local firefighters by falsely attributing the state’s losses to its own purported mistakes. “There is no reason for these massive, deadly and costly forest fires in California except that forest management is so poor,” he wrote on Twitter. “Billions of dollars are given each year, with so many lives lost, all because of gross mismanagement of the forests. Remedy now, or no more Fed payments!” When disaster strikes, Trump’s first question appears to be “Who can I blame?” and not “How can I help?”

It’s hardly news to note that empathy is a trait that the president lacks. He has made virtually no public expressions of grief or sorrow about the death toll from the coronavirus pandemic, even as it nears 200,000 lost Americans—the equivalent of 67 September 11s. “A thousand Americans are dying every day,” Axios’s Jonathan Swan told Trump in an interview in August. “They are dying, that’s true,” Trump replied. “It is what it is.” That callousness can have a dire effect on public policy. Earlier this week, The Washington Post’s Bob Woodward reported that Trump privately remarked about the potential deadliness of the virus weeks before he publicly downplayed its effect for political gain.

Indeed, the federal government’s response to the pandemic showed how Trump and his allies don’t seem to view “blue states” as their responsibility, apparently because they see little to no self-interest in helping communities that won’t vote for him in November. While he happens to be the president of the United States, his interest in those states is often determined by his potential for political gain. That habit raises grim questions about how Trump would govern the country if he is reelected in November and freed from future electoral consequences by the Constitution’s two-term limit.

Perhaps the only solace in Trump’s silence is that he’s not adding metaphorical fuel to the metaphorical fire. After all, he could be encouraging residents not to evacuate or take other life-saving measures. He could be describing the fires as a hoax to make him look bad. He could be contributing to the flood of disinformation that attributes the wildfires to antifa or the Black Lives Matter movement. The only thing worse than a president who doesn’t try to make things better is a president who only knows how to make things worse.