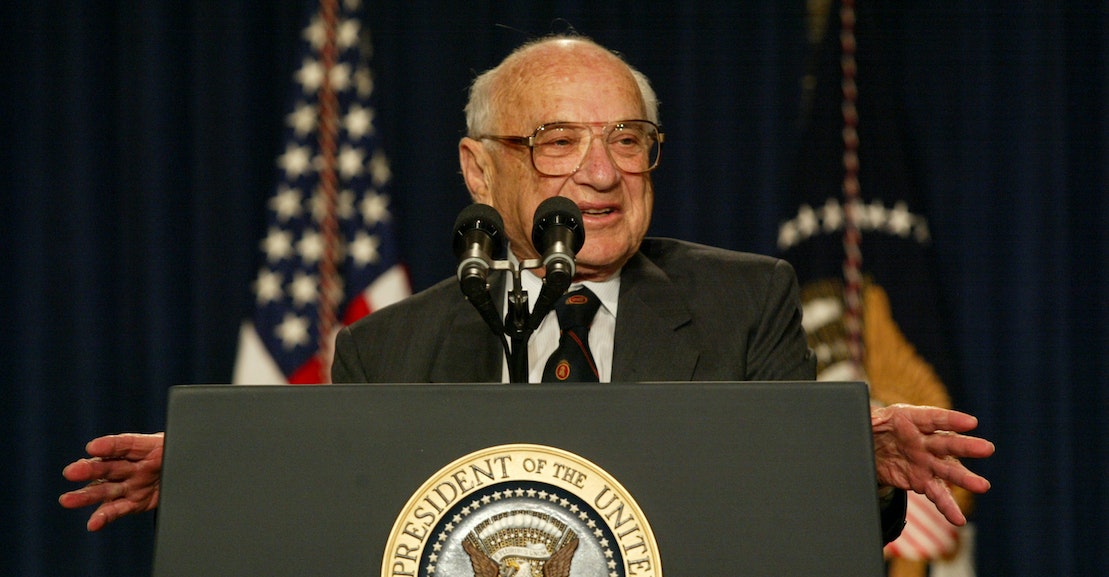 Last week I explained the pernicious long-term effect of Milton Friedman’s theory of the corporation. But the famed libertarian economist’s baleful legacy doesn’t end there: Friedman’s ideas about monetary policy have long created negative economic consequences. And now, more than 40 years after the monetarist recession that former Fed chief Paul Volcker engineered under the influence of Friedman’s theories, Jay Powell’s Federal Reserve is trying to break free from them.

Friedman’s ardent libertarian faith was central to his monetarist thinking; like all libertarians, he was always extremely wary of anything that would cause the size of government to grow. He saw personal liberty as a zero sum: If government grew, then personal liberty was automatically reduced. Friedman thus crafted most of his important theories to limit government and provide free-market alternatives to proposals that would expand government.

One area that Friedman was particularly concerned about was using government to avert or soften the impact of economic downturns. He feared that government jobs programs and similar interventions could too easily become permanent, even if they were temporarily justified by high unemployment.

So Friedman argued for using monetary policy rather than fiscal policy to counteract recessions. His prime example was the Great Depression, which he saw as primarily a failure of the Federal Reserve. By the time the Depression hit, Friedman contended, the Fed had allowed the money supply to shrink by about a third, which brought on a deflation that caused the price level to drop by about 25 percent. Deflation stifles economic activity because it raises real interest rates and wages, increases the burden of debt, and forces producers to sell commodities for less than the cost of production, among other things.

But Friedman’s account glossed over why the money collapsed. When banks failed in those days, their deposits simply disappeared: There was no deposit insurance, and the bulk of the money supply consisted of bank deposits, not cash. The Fed lacked the legal authority to buy banks and keep them solvent, which is the only thing that would have helped. (Needless to say, Friedman would also have opposed nationalization of the banks on libertarian grounds.) The Fed was also constrained by the gold standard, which many foolish right-wingers still advocate.

The only thing the Fed can really do to counteract a downturn is buy Treasury securities on the open market using newly created money. But if the banking system is basically frozen, as it was in the early 1930s, there is no transmission system to get money circulating. So in the great tradition of academic economics, Friedman just assumed away this problem, insisting that the Fed could have prevented the Depression simply by aggressively buying Treasury securities and flooding the economy with money.

A key benefit of the Friedman approach is that once the money supply surges, the rest of the federal government doesn’t have to do anything. In a strict monetarist regime, there’s no need for public works or jobs programs that would increase the size of government. Monetary policy was relatively benign, whereas fiscal policy was potentially pernicious by virtue of the perennial threat it poses to individual liberty.

The British economist John Maynard Keynes understood perfectly well that deflation and a shrinkage of the money supply were at the root of the economic problem. But unlike Friedman, Keynes could see that there was a key impediment to increasing the money supply via open market operations. He called this the liquidity trap.

As Paul Krugman put it, “If the interest rate is zero, bonds and money become in effect equivalent assets, so conventional monetary policy, in which money is swapped for bonds via an open-market operation, changes nothing.”

Normally, interest rates are positive—and they rise as a security’s maturity lengthens, because the risk of inflation or default rises over time. The spectrum of low interest rates on short-term securities such as three-month Treasury bills to 30-year Treasury bonds is called the yield curve. Interest rates on high-grade corporate securities tend to follow those of Treasury securities of the same maturity.

It’s also important to know that the expected rate of inflation will tend to raise market interest rates, percentage point for percentage point. Thus if the long-term natural rate of interest in a zero-inflation environment would be, say, 4 percent, and investors suddenly decided that inflation would be 5 percent, then one would expect the long-term rate to be 9 percent. In short, a rise in inflationary expectations should also raise the rate of interest.

As early as 1933, Keynes spelled out the correct approach to a deflationary depression in an open letter to Franklin Roosevelt published in The New York Times. He explained the vital role of government spending in raising aggregate spending in the economy, which was then frozen by deflation. Consumers and business would both constrain private spending as long as they thought prices would be lower in the future. Thus government was the only entity capable of increasing aggregate spending.

But not just any spending, Keynes noted: Government needed to buy goods and services. Pure transfers where money just goes into saving was economically impotent. Only raising the demand for “stuff” would allow money to begin to circulate. (This is why the Reagan tax cuts had far less effect in the 1980s than Republicans imagine; the defense buildup accounted for much of the growth.) As Keynes explained:

I lay overwhelming emphasis on the increase of national purchasing power resulting from government expenditures which is financed by loans and is not merely a transfer through taxation, from existing incomes. Nothing else counts in comparison to this.… In a slump governmental loan expenditure is the only sure means of obtaining quickly a rising output at rising prices.

Clearly, Keynes meant for prices to rise as the result of deficit-financed spending on goods and services, accommodated by the actions of the monetary authority. For this reason, right-wingers have long accused Keynes of being nothing more than a crude inflationist. This is nonsense. He was talking about reflation, not inflation; that is, raising a price level that had fallen due to deflation. When inflation threatened economic stability, Keynes was a determined inflation fighter.

Inflationary expectations have a very stimulative economic impact in an economic slump. Just as people put off purchases in a deflation, the prospect of higher prices in the future will cause them to buy immediately before they go up. And the rise in interest rates will stimulate investment for the same reason—businesses and home buyers will want to borrow now before rates rise.

Keynes was critical of the purely monetary approach to expansionary policy. Injecting money into the economy when investment and consumption are flat would have no stimulative effect. It was “like trying to get fat by buying a larger belt,” he said.

The reason why this history is important is that we have been having the same debate since the beginning of the Great Recession in 2008. Is monetary policy sufficient to counteract a serious economic downturn—or must it be accompanied by an appropriately expansive fiscal policy if it is to work? Is an inflationary Fed policy to be resisted at all cost, lest we suffer a repeat of the stagflation of the 1970s? Or is it an essential consequence of an expansionary economic policy? Is any increase in interest rates to be feared lest it short-circuit the recovery, or is it a sign that monetary and fiscal policy are working exactly as they should?

For many years, the Fed has said that it couldn’t reverse the downturn by itself and needed help from fiscal policy. As Barack Obama’s stimulus package was being debated in early 2009, the Federal Open Market Committee, the Fed’s policymaking arm, said, in early 2009, that it couldn’t be expected to produce an economic turnaround on its own: “Participants generally thought that fiscal stimulus was a necessary and important complement to the steps the Federal Reserve and other agencies were taking, and that it would help foster economic recovery.”

In November 2011, Fed Chairman Ben Bernanke complained that the Fed’s efforts to stimulate growth had been hampered by an insufficiently expansive fiscal policy. “I think it would be helpful if we could get assistance from some other parts of the government to work with us, to help create more jobs,” he said.

As the American economy is struggling under the strictures of the Covid-19 pandemic, current Fed Chairman Jay Powell is still begging for help from fiscal policy. It has become increasingly clear that the Fed’s efforts to stimulate spending by keeping short-term interest rates close to zero and raising inflationary expectations have failed. For many years, the Fed has stressed that its monetary policy has aimed for a 2 percent inflation rate and has also conceded that it’s consistently failed to meet this target. Nevertheless, the Fed expects to maintain its zero interest rate policy indefinitely.

When the Fed first began its efforts to stimulate the economy by dropping interest rates and increasing the money supply in 2008, conservatives condemned the move, saying rampant inflation would soon result. Although there has been no sign of inflation in all the years since, they are making the same argument today. Conservatives are nothing if not consistent.

The day may come when the Fed must tighten monetary policy to keep inflation in check. But in the past, its preemptive strikes against it by tightening prematurely have nearly aborted the economic expansion it was seeking to spur. Before the Fed tightens again, there must be unmistakable signs of persistent inflation and rising long-term interest rates. And all the evidence suggests that it will be a long time before this happens.