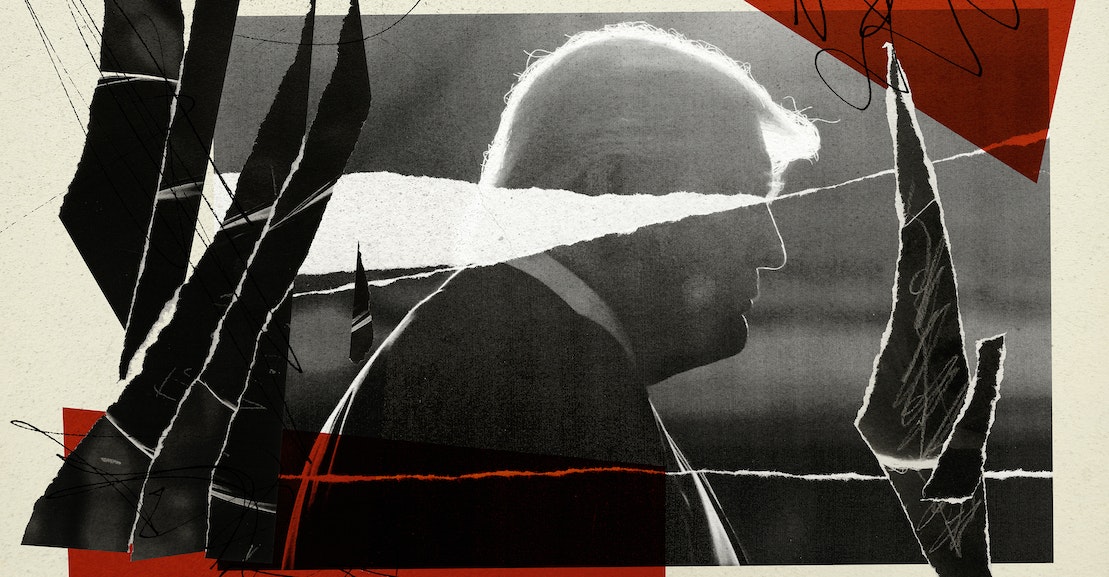 Commentators have worried from the moment his presidency began that Trump might challenge the 2020 election results or even stay in the White House in the event of a loss; anxieties about this are so palpable in the press that Trump has joked about it from time to time. The impact the coronavirus pandemic has already had on the election—the innate challenges of the attempted transition to mass vote by mail, mismanagement and suspected shenanigans at the intentionally underfunded Postal Service, the fact that the results might be unclear for days or even weeks after Election Day even in the best foreseeable circumstances⁠—has only compounded Democratic concerns about how November will play out.

On Tuesday, The Daily Beast reported that a coalition of progressive groups calling itself the “Democracy Defense Nerve Center” met last week to develop a game plan. “Over the course of two hours, participants broached the question of what the progressive political ecosystem can functionally do in a series of election scenarios,” the Beast’s Sam Stein wrote. “They began charting out what it would take to stand up a multi-state communications arm to fight disinformation, a training program for nonviolent civil disobedience, and the underpinnings of what one official described as ‘mass public unrest.’” In a Thursday piece, Progressive Change Campaign Committee co-founder Adam Green similarly told The Atlantic’s Ron Brownstein that postelection protests defending a full vote count might resemble “the Black Lives Matter protests on steroids, as people come into the streets to defend their democracy and to defend the counting of votes.”

Support for direct and dramatic action is coming from at least a few unlikely places. David Brooks’s column for The New York Times last week, “What Will You Do if Trump Doesn’t Leave?” expressed hope that our democracy might be saved, if push comes to shove, by “a group of sober people who are militant about America, who can see reality unblinkered by the lens of partisanship, and who are finally compelled to organize.” But a call to arm the moderate columnists this was not: Brooks envisions a massive, peaceful democratic uprising like those we’ve seen elsewhere across the globe over the last several years. “If Trump claims a victory that is not rightly his, a few marches in the streets will not be an adequate response,” he wrote. “There may have to be a sustained campaign of civic action, as in Hong Kong and Belarus, to rally the majority that wants to preserve democracy, that isolates those who would undo it.”

It should be said that there’s no real way for Trump to meaningfully hold onto power if it’s determined that he lost the election when all is said and done. Legal experts and scholars of the presidency have been trying to reassure the public about this for some time. Unless Trump can persuade the entire federal government and its law enforcement to do his bidding, he will no longer be president on Inauguration Day, even if he sits at the Resolute Desk with his arms crossed and refuses to leave the White House.

“Trump,” The Washington Post’s Chris Cillizza warned in one October column, “isn’t going to simply disappear on Nov. 9.” How right he was!

It also shouldn’t be forgotten that there was intense concern about Trump refusing to concede the election in 2016, particularly after he suggested he might not at the last presidential debate. “Democracies require public legitimacy for their survival,” The Atlantic’s Peter Beinart wrote that night. “When powerful actors withhold that legitimacy, the system crumbles.” Later that month, Harvard’s Steven Levitsky told The New York Times that Trump’s comments resembled strongman rhetoric from developing and pseudo-democratic countries. “This is the stuff that we see in Russia and Venezuela and Azerbaijan and Malawi and Bangladesh, and that we don’t see in stable democracies anywhere.” The hubris of this discourse and its presumptions about the state of the race make for some bleak comedy in hindsight. “Trump,” The Washington Post’s Chris Cillizza warned in one October column, “isn’t going to simply disappear on Nov. 9.” How right he was!

Of course, the fact that Trump ultimately prevailed in a clean and constitutionally legitimate Electoral College victory then doesn’t invalidate alarm about Trump’s willingness to wreak havoc now. Not even victory prevented him from alleging that mass voter fraud had been conducted against him in 2016; he’s absolutely certain to publicly challenge the results of this year’s election no matter who ultimately wins. And the concerns that Trump and sympathetic Republicans might actively work to stymie or obstruct the full counting of votes this time around are well justified. But we also shouldn’t neglect the possibility that Donald Trump might win the election just as he did in 2016—by the time the counts are done, he comes out genuinely ahead in the states he needs to win the Electoral College again. What happens then?

For the past several months, a number of articles on what awaits us in November have referenced war games conducted by the Transition Integrity Project, a kind of pop-up think tank on the election. It counts over 100 academics, political operatives, government officials, and pundits as members, including former Republican National Committee Chairman Michael Steele, former Democratic National Committee Acting Chair Donna Brazile, Weekly Standard founder Bill Kristol, and Hillary Clinton’s former campaign manager John Podesta. After Trump refused to commit to conceding during that last debate in 2016, Podesta condemned him, saying Trump’s remarks had been “a tremendous mistake.” During the Transition Integrity Project’s simulation of this election in June, Podesta played a Joe Biden who’d won the popular vote but lost the Electoral College, just as Clinton did. He refused to concede.

“In that scenario, California, Oregon, and Washington then threatened to secede from the United States if Mr. Trump took office as planned,” The New York Times’ Ben Smith wrote last month. “The House named Mr. Biden president; the Senate and White House stuck with Mr. Trump. At that point in the scenario, the nation stopped looking to the media for cues, and waited to see what the military would do.” A report from the group describes what happened in more detail—California, Oregon, and Washington threatened to secede, yes, but in order to extract a set of concessions from Trump and Republicans. “With advice from President Obama,” it reads, “the Biden Campaign submitted a proposal to 1) Give statehood to Washington, DC and Puerto Rico; 2) Divide California into five states to more accurately represent its population in the Senate; 3) Require Supreme Court justices to retire at 70; and 4) Eliminate the Electoral College, to ensure that the candidate who wins to the popular vote becomes President.”

This is practically surrealism. Joe Biden and Democratic states are not going to threaten the break up of the United States this November, and those who participated in the scenario knew it. Secession was proposed because secession was, evidently, the only means they could conceive of for extracting structural concessions from Republicans after a Trump victory; it’s the kind of idea one puts out and teases out when there are no others left. There’s something inescapably risible about this: The notion that major political figures who’ve done absolutely nothing whatsoever over the last four years to advance the cause of eliminating the Electoral College would, in a strategy session just months before the election, finally address the Electoral College as a problem by imagining, in a deranged game of make-believe, the Democratic nominee bravely instigating an epic constitutional crisis on the behalf of reforms he’s publicly criticized and opposed.

It’s all well and good to have a “Democracy Defense Nerve Center.” But where has the Electoral College Nerve Center been?

The words “Electoral College” do not appear in this year’s Democratic Party platform, just as they didn’t in 2004, 2008, 2012, or 2016. It’s all well and good to have a “Democracy Defense Nerve Center.” But where has the Electoral College Nerve Center been? How do they actually intend to solve this problem? Do they intend to solve it? What would they be doing if they did? This last question has a straightforward answer.

The National Popular Vote Interstate Compact, or NPVIC, is a proposed agreement that would have each state give its Electoral College votes to the winner of the national popular vote. Once states with a total of the 270 votes needed to win an election agree, the Electoral College will be functionally abolished. No Constitutional amendment would be required—the Supreme Court affirmed just this year that states can govern their electors however they please—although it’s possible that a Democratic Congress would have to ratify the compact before it took effect. So far, states with a total of 187 votes have joined the compact. Eighty-three more are needed. There would surely be legal challenges from the right if the compact were ever completed and the rest of the road to 270 runs, in the first place, through less Democratic and more challenging states than the ones that have already ratified it. Neither of these are reasons not to try—if the Democratic Party and progressive groups establish a national popular vote as a policy priority, organize around it, and invest heavily in pushing it, the compact will have a chance. If they don’t, it won’t. The independent resources simply aren’t there.

Take, for instance, one of the compact’s next target states, Colorado. Colorado actually joined the compact in March 2019. But Republicans certified a veto referendum against it, and that measure will be on the ballot this November. So far, the campaign around the referendum has taken in just over $5 million in contributions from donors for and against it. That’s nearly 35 percent less than the average amount raised for ballot measures nationwide in 2018.

Nationally, as best as one can tell, the fate of the NPVIC effort and perhaps American democracy lies in the hands of a man named John Koza, a co-inventor of the scratch-off lottery ticket, who chairs the nonprofit National Popular Vote Inc. and has given over $14 million of his own money to the popular vote push. The group’s pool of principal backers appears to be quite small and eclectic overall—there are even a few Republicans sprinkled in, including a former chair of the Michigan Republican Party who advised Ted Cruz’s 2016 campaign and a former chair of the American Legislative Exchange Council. Although National Popular Vote does have some support from liberal foundations, the amounts it raises are barely droplets in the wider bucket of political giving—it took in just over $1.3 million in revenue in 2018. (FairVote, a broader election reform group that has contributed to the National Popular Vote effort, took in about $2.7 million.)

The project of rectifying all this with more resources and a broader substantive commitment to the popular vote from progressive groups and leaders will be vital in the long run. In the short run, obviously, it’s already too late—it is entirely possible Trump will again emerge the victor of a ludicrous and indefensible electoral system that, panicked as they might be about the trajectory of American democracy, nobody in national politics has made a serious effort to challenge.