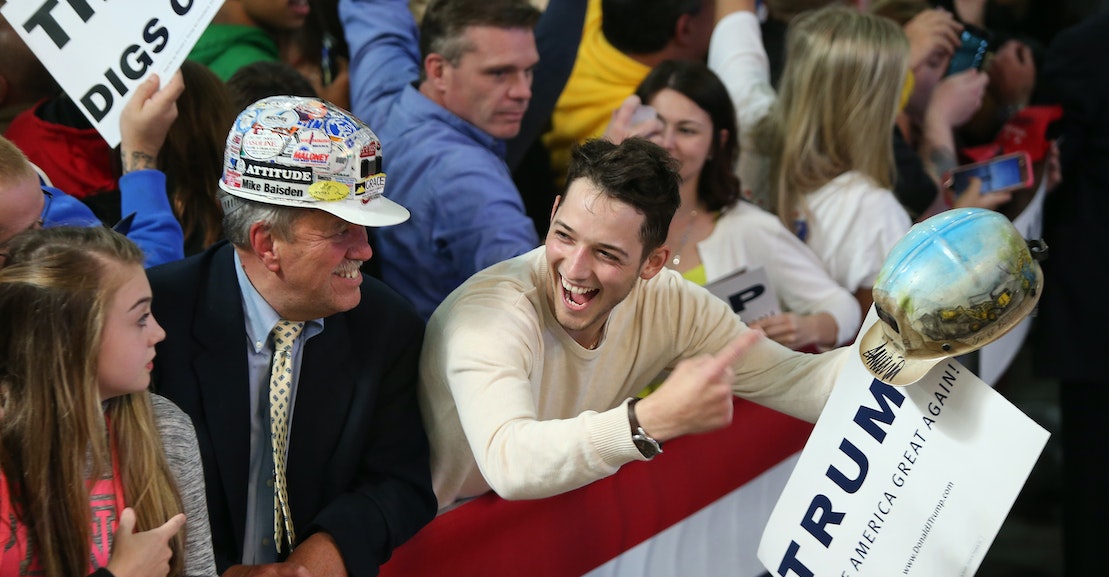 The “statement on a conservative future for the American labor movement,” released just before Labor Day by the fledgling think tank American Compass, opens, naturally, with a celebration of “economic freedom,” “limited government,” and markets. All of these things are good, American Compass claims, but something has nevertheless gone bad.

“As we advocate for owners and managers in their pursuit of profit, and celebrate the enormous benefits their efforts can generate for us all, we must accord the same respect to the concerns of workers and ensure that they too have a seat at the table,” the statement—signed by Marco Rubio, Jeff Sessions, and Hillbilly Elegy author J.D. Vance, among others—explains. “In a well-functioning and competitive market, participants meet as equals able to advance their interests through mutually beneficial relationships.” Sounding very much at one point like Bernie Sanders, the statement’s authors continue, “Strong worker representation can make America stronger.”

What follows is a truncated history of the decline in union membership in the United States, which treats the phenomenon as a mysterious ex nihilo occurrence, and an amicable vision of the future of the worker-employer relationship built on mutual respect and benevolence. It all feels fairly harmless, if a little deluded.

The prospect of a right-wing workers’ movement has terrified the left and titillated nationalists for decades because it tends to evoke the specter of a salt-of-the-earth white majority rising up to, if I can borrow a phrase, make America great again. But despite the recurring fascination with this idea on both sides of the political divide, in the U.S., pro-worker conservatism, for all its pretenses of mass appeal, is a fleeting thought-exercise cooked up by pundits and think tanks more than a movement with any significant constituency. This is Mitch McConnell’s party, after all.

Earlier this spring, for instance, as American Compass was just launching with blogs about family life in a work-obsessed culture, McConnell—who’s opposed increasing the minimum wage and heartily cheered the Supreme Court’s undermining of public sector unions—blocked federal aid to states struggling to cover public employees’ pensions during a pandemic. And though Donald Trump’s thundering about jobs and trade may have helped him win around 43 percent of union households in 2016, his presidency (like most other Republican administrations) has been defined by handouts to corporations and the wealthy. Whatever support he once had among working-class voters now appears to be crumbling.

In other words, pro-worker sentiment on the right may be an occasional subject of media interest, but there isn’t much else there. “Some conservatives may want to treat workers well, or may even want to use state power to improve the lives of workers, but unionism is about worker power,” Joshua Freeman, a labor historian at the CUNY Graduate Center, told me. “If you’re giving workers some say over what happens on the shop floor, in the office, or in the service center, you’re limiting the discretionary power of the employer. And it’s pretty hard to find a conservative that actually wants to do that.”

Even beyond the party’s fiercely anti-union leaders and lobbying machinery, Republican voters themselves are significantly less likely to support unions than their Democratic counterparts. A recent Gallup poll found that while 65 percent of the general public said they supported unions, only 45 percent of Republicans said they did, compared to 83 percent of Democrats. That is to say, this isn’t any kind of home for labor.

As journalist Steven Greenhouse recently wrote, there have been instances in the past when Republican administrations courted organized labor with varying degrees of success: Eisenhower pledged not to roll back collective bargaining rights, for instance, and even Nixon extended some overtures to unions. And today, in certain states, unions do work with amenable Republican politicians on certain issues.

“If you go to parts of the upper Midwest or the middle of Pennsylvania, you’ll find plenty of Republican state representatives that have a voter base of blue-collar workers, who broadly believe in their unions and want them to do well,” Dustin Guastella, the director of operations for Teamsters Local 623, told me. “Those Republicans are fine being more pro-labor because their voters are pro-labor.” But if conservatives bent on moving the Republican Party in a worker-friendly direction are hoping to revitalize or scale up these types of limited alliances, it’s unlikely to happen at a national level. “On a federal level, the sheer concentration of union votes is so diluted that there’s rarely a Republican in Congress that needs to rely on the union vote,” Guastella said.

And while American Compass–style conservatives might say they support the “reform and reinvigoration of the laws that govern organizing and collective bargaining,” their approach to strengthening labor—which they seem to envision as a means to restoring a traditional social order, rather than a check on the power of capital—also has clear limits. According to Kate Bronfenbrenner, the director of labor education research at Cornell University’s School of Industrial and Labor Relations, conservatives’ efforts to shore up labor often simply amount to “worker management strategies” designed to defang labor militancy.

“Are they pro-worker, or are they just worried that we might get a labor movement that’s even more militant?” she asked. “Right now we have a lot of strikes going on and we have organizing happening at some of the largest corporations in the country. Business is worried about the enormous gap between the rich and the poor, because in the past, when labor militancy has increased, it’s happened at times like this.”

In fact, Oren Cass, the executive director of American Compass, has openly stated that one goal of his version of labor advocacy is to defuse hostility between workers and management. “I would favor creating a much more collaborative model of labor-management relations within the firm,” he said in an interview with New York magazine. “An example would be works councils. There are a lot of different ways to do it.”

But as Bronfenbrenner explained, arrangements like works councils—nonunion panels of employees that negotiate with employers—that have found success in Europe won’t actually benefit workers in the U.S. without certain other social programs in place. “In countries where there are works councils, management also can’t fire workers at will—the works councils have the final say on discharge,” she said. “Those countries also have strong social safety nets, which means that workers are more willing to have works councils because they don’t have to negotiate with their employer for things like health care and paid leave.”

But American Compass doesn’t support expanding social welfare programs or other public goods, and it seems content to recycle the usual right-wing talking points about unemployment and other benefits. On the subject of cash assistance, Cass told New York, “I think that’s where you run into the most serious social and cultural problem, which is that you’ve now created a baseline income that looks an awful lot like what you could earn in the workplace.” In reality, there’s not much evidence that unemployment insurance disincentivizes work or that welfare erodes the social fabric (and, on the flip side, quite a lot of evidence that welfare work requirements push people into deep poverty while simultaneously failing to increase employment).

Yanking away social supports or whittling them down to the barest bones—as both Republicans and Democrats have done for decades—is just another assault on the very working class whose interests American Compass claims to have at heart. The Republican Party should be pro-worker, their logic goes, while also being deeply suspicious of those workers’ apparent laziness and propensity to unemployment fraud.

The case for pro-worker conservatism, then, is fragile at best. And for all the ink spilled after 2016 on the prospect of white union workers being seduced by right-wing populism, the Trump bump may be more fleeting than the right would like to think. As Guastella told me, the aftermath of the 1980 election of Ronald Reagan offers one clue. That year, an unprecedented percentage of union households voted for Reagan, and the election is often thought of as the moment that white blue-collar workers fled into the arms of Republicans and never looked back.

But, Guastella said, the two election cycles after that tell a somewhat different story. “What happened was that a chunk of those union voters went back to the Democrats, and the rest of them dropped out and just stopped voting altogether,” he said. “Right-wing populists assume they’re riding the tide of the workers’ movement all of a sudden because Trump managed to pull in a few union members, but the reality is that most of those workers are probably not sticking with the Republican Party long term.”

In the end, Trump hasn’t delivered on his populist promises, his voter base is more diluted than ever, and right-wing workerism still can’t find a home within the Republican Party. And what’s more, the new crop of ostensibly union-friendly conservatives are remarkably fuzzy on the details of how their own vision might unfold. “I can only describe the general directions I think we should be moving in,” Cass told New York. Similarly, American Compass’s Labor Day statement hedged, “We endorse no specific proposal.” That sounds about right.