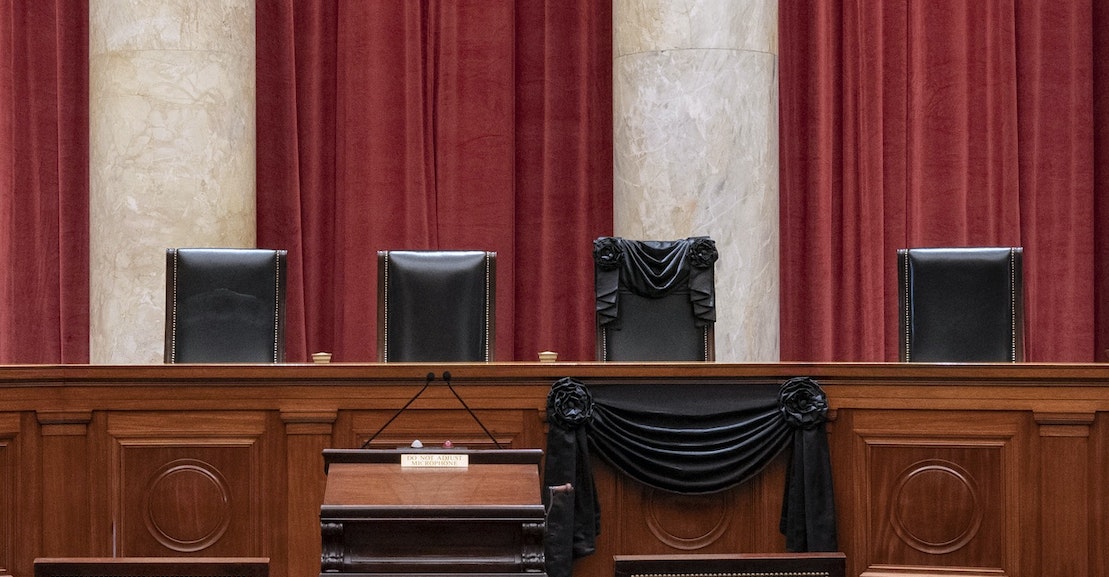 The death of Ruth Bader Ginsburg, one of the most influential Supreme Court justices of all time, is first and foremost a cause for national mourning. But it is also a political opportunity. The Republicans, of course, see it that way—but the Democrats should, too.

President Trump has announced he’ll nominate Ginsburg’s successor by week’s end, and Senate Majority Leader Mitch McConnell has vowed to bring that pick to a vote this year—even if it has to be done in the lame-duck session after the election, and even if Republicans lose the Senate and the White House. Despite leading Republicans’ sanctimonious arguments in 2016 that a court vacancy must not be filled during an election year, they intend to do exactly that in 2020.

The Republicans, who have fought every political battle of the past dozen years as though it were their last, can be expected to keep their word. But even if they unexpectedly stand down from yet another divisive political escalation, or somehow fail in their effort to replace Ginsburg, Democrats must be prepared to enlarge the Supreme Court—by four justices—if they win resoundingly on November 3.

Such a radical gambit is justified by the fact that America’s political institutions this century have consistently translated minority support for Republicans into political majorities. GOP presidential candidates have won the popular vote just once since 1992. Republicans have not won the total popular vote of any three consecutive Senate elections in the twenty-first century, but due to the absurdity of that chamber’s composition—where half a million people in Wyoming have the same number of senators as 38 million Californians—they have controlled the chamber more often than not for more than two decades.

Now 53 Republican senators—several of whom won their seats in achingly close elections that would have gone blue without the GOP voter suppression tactics upheld by the Roberts court, and who represent a minority of the American population—may well confirm another right-wing justice, the third nominated in four years by a president elected by a minority of the American people thanks to the Electoral College, the most plainly undemocratic electoral institution in the democratic world.

McConnell’s quest to fill a Supreme Court vacancy weeks before a presidential election should fuel outrage that finally radicalizes even committed institutionalists. While the Roberts court has issued the occasional heterodox decision, it has always reinforced Republican political power when given the opportunity. In 2010, it overturned decades of campaign finance law so that idle rich people could try to buy our elections, and in 2013 it gutted the Voting Rights Act, allowing states across the South to make it harder for people to vote. This will get worse unless and until Democrats do something about it.

Yet the party, until very recently, seemed oblivious to its predicament. During the early years of Obama’s presidency, Democratic elites clung to the outmoded, anti-democratic filibuster in the Senate, allowing Blue Dog Democrats and Republicans to exercise veto power over their agenda. The national party largely ignored GOP voter suppression tactics in the states, even when GOP legislatures were gleefully passing cookie-cutter voter ID laws transparently designed to quash Democratic turnout. The first strict voter ID law was passed in 2005, and Democrats did nothing about it with their towering congressional majorities from 2009 to 2011.

When, nine months before the 2016 election, McConnell refused to consider Obama’s nominee for a critical swing seat on the Supreme Court, it should have been the last straw for Democrats. Merrick Garland would have given liberals their first court majority since the 1960s. McConnell’s ruthless maneuver was itself an exercise in manipulating the size of the Supreme Court, shrinking it to eight for more than a year. Yet even then, Democrats refused to threaten court enlargement, choosing instead to issue stern statements of displeasure before meekly rolling over.

The good news is that in the interim, court-packing has rapidly gone from a fringe idea to something even normally staid Democrats are embracing. House Judiciary Chair Jerry Nadler, not exactly known for his bloodthirsty radicalism, made the threat explicitly on Twitter. Other previously tame figures like Senator Richard Blumenthal and Minority Leader Chuck Schumer have refused to rule it out when asked directly how they might respond. (Joe Biden has sounded a more cautious note, but refused on Monday to answer a Wisconsin reporter who asked whether he would pack the court.)

Court-packing is gloriously legal. Unless Republicans indicate an openness to a compromise constitutional amendment to end lifetime tenure for justices, it is the only way Democrats can avenge years of Republican nihilism and avert a 6–3 conservative Supreme Court majority that strikes down whatever ambitious Democratic laws may come. That’s why, if the Democrats win the Senate and Joe Biden wins the White House, they should pass a court-packing bill soon after the new Congress is sworn in on January 3. Biden should then give Neil Gorsuch and whoever replaces Ginsburg two weeks to resign before he signs the bill and relegates them both to writing lonely dissents on a court with a 7–6 liberal majority.

Critics of court-packing argue that Republicans will inevitably return the favor. So what? At least that would produce courts that are more responsive to public opinion rather than serving as the last redoubt for a long-expired political majority. And if Democrats use their newfound power to address other features of the electoral system that give Republicans an asymmetrical advantage in national elections—by enacting statehood to D.C. and Puerto Rico, passing a new voting rights act, and implementing national ranked-choice voting, for instance—it could be many years before the GOP controls Congress and the presidency at the same time, for the very simple reason that Republicans are likely to continue to be unpopular and will rarely win at all in a reformed electoral system.

If Republicans are somehow unable to fill Ginsburg’s seat either before or after a Trump loss, it will almost certainly deflate the court-packing movement. It shouldn’t. The GOP will still have its ill-gotten 5–4 majority, and that narrower majority could wreak havoc on Democratic policies. These right-wing ideologues have been playing Calvinball with the Affordable Care Act for 11 years, so one can only imagine what they would do to Medicare for All. Kavanaugh and company might also block D.C. statehood, hollow out any new voting rights provisions, and scotch any attempts to reform the electoral process. Remember: The Supreme Court is the fulcrum point of the GOP’s power. It will use it to destroy Biden’s presidency and ride back to office on a wave of public discontent and disillusionment.

Democrats cannot move this country forward by clinging to long-dead norms that their adversaries gleefully and unapologetically flout at every opportunity. If the Democrats pack the court straight away, voters might already have grown accustomed to it by 2022, while the party shores up its political standing with one social policy after another and take decisive action to ensure future elections are fought on a level playing field. Alternately, in the interest of pleasing Beltway civility umpires, the Democrats can sit back and watch as Republicans stomp out any remaining embers of fairness and equality in America’s electoral system.