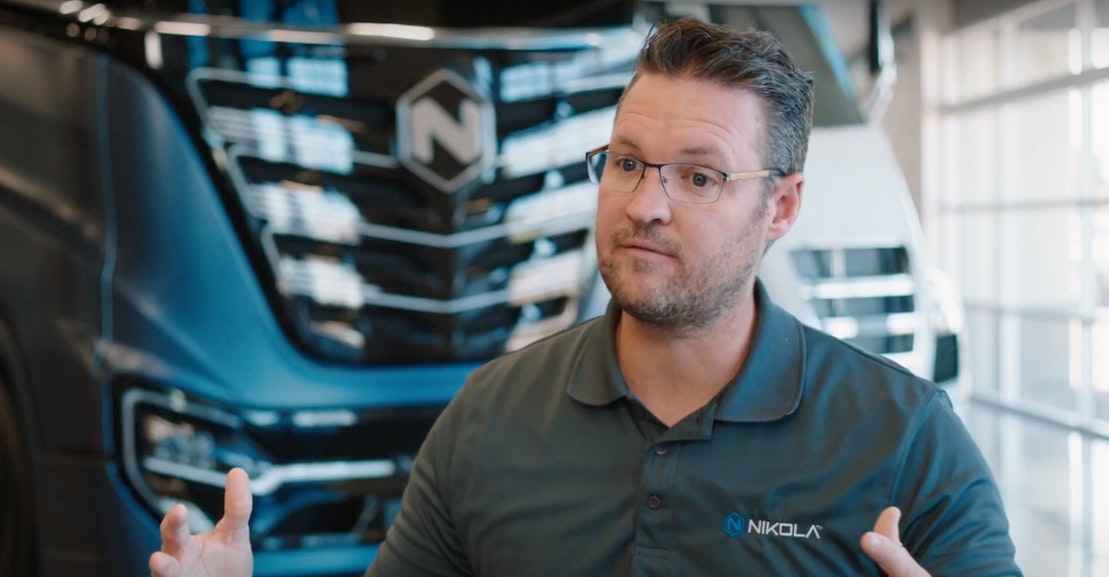 “There’s very few people that can out-Elon in this world, and I’m one of them,” said Nikola Motor founder Trevor Milton earlier this summer. Milton’s 35 percent stake in the hydrogen-electric vehicle company—like Musk’s EV company, named for Nikola Tesla—made him extraordinarily rich when the company went public in June, its value shooting up to $27 billion. The success has been reflected in Milton’s boisterous social media presence, where, between tirades addressed to his “haters,” he’s boasted about having bought his father a private plane. Many have compared Milton and Musk. But whatever you think of Elon Musk, he’s managed to do something that Milton hasn’t yet: manufacture and sell cars. Amid allegations of fraud and reported federal investigations, Milton resigned from Nikola Monday morning.

Energy wonks had been skeptical of Nikola’s claims for a while. But the real catalyst for Milton’s downfall came September 10, when Hindenburg Research, which has shorted Nikola shares, released an extensive report that accused the company of spinning an “ocean of lies” about its supposedly cutting-edge hydrogen and battery technology. Hindenburg alleged, for instance, that the company staged a video claiming to show a working model of its “Nikola 1” truck, positioning it atop an incline and rolling the vehicle downhill. Much of the breakthrough technology it promised, the report also alleges, has been outsourced. The Securities and Exchange Commission, the Department of Justice, and the U.S. District Court for the Southern District of New York are all now reportedly taking a closer look at the company’s books, according to Bloomberg and the Financial Times, with a class-action lawsuit in the mix; none of those bodies, however, have confirmed their investigations to the press as of Monday afternoon. Complicating matters, Nikola has also allegedly reached out to the SEC, reportedly urging it to investigate Hindenburg because the research firm stands to gain if the company’s shares fall.

Amid the messy debacle now playing out, one or two things seem clear. First, at a time when the health of the stock market has diverged starkly from the health of the world, investors’ prior enthusiasm for Nikola seems like yet another example of their strained relationship to reality. And second, Nikola’s chaos should be a cautionary tale for those who expect wunderkind CEOs to deliver the breakthrough technologies that will power the way to a low-carbon future.

Decades of ideological priming have taught many to believe that Wall Streeters and tech company founders are geniuses—the best people to plan everything from which stocks to buy to how to solve the climate crisis. It’s why federal policymaking largely defers to the private sector to deliver much-needed innovation, subsidizing it with public funds meant to be turned into private profits that will somehow lead to societal gains.

Tax breaks and early-stage research funding for projects clearly in the public interest, like those boosted by the American Recovery and Reinvestment Act in 2009, are well and good. But as politicians consider how to respond to both this recession and the climate crisis, the Nikola story is a good example of why government taking a more active role in driving the energy transition might lead to better and less chaotic results. After all, the state can’t be any worse at deciding what’s best for people and planet than the collection of wealthy goons who decided that Trevor Milton should be a billionaire.

Nikola has planned to become a vertically integrated green trucking empire: to lease out semi-trucks powered by a network of 700 hydrogen charging stations. Each of those charging stations, Milton estimated, would cost between $20 and $30 billion, involving enormous amounts of water and electricity to produce hydrogen on-site—a curious business model even before the Hindenburg report emerged. Last week, higher-ups at Nikola said they would truck in any hydrogen that couldn’t be produced on-site, if, for instance, the cost of electricity—which the company says it will source from the grid—is too high. As of now, truck production and station construction are each set to begin sometime in 2023, having already been pushed back from an initial start date of 2021, all as “reservations” for trucks—in a sales tactic mirroring Tesla’s—boosted hopes that Nikola was the next big thing.

The company’s high share value was based largely on preorders for trucks that don’t exist yet. Partnerships with established businesses like German tech company Bosch, French electrolysis company NEL Energy, and American brewer Anheuser-Busch lent the project legitimacy, although many now say this was an act of smoke and mirrors. Milton advertised the Anheuser-Busch partnership in September 2019 by riding out to a photo op in a wagon pulled by Budweiser’s signature Clydesdales. Two months later, the companies announced that Anheuser-Busch had completed its first “zero-emission beer delivery” in St. Louis, using a prototype of the Nikola Two hydrogen-electric truck. The Hindenburg report has now thrown the details of such prototype announcements into question.

Earlier this month—just before the Hindenburg report—Nikola announced a new partnership with General Motors, with GM taking a $2 billion, 11 percent ownership stake in the start-up that’ll grant Nikola access to GM’s hydrogen technology in order to “engineer, validate, homologate and build” battery electric and fuel cell versions of Nikola’s Badger pickup truck. According to the Financial Times, however, the majority of the deal is about Nikola buying hydrogen fuel cells—news that would seem to suggest Nikola’s own hydrogen fuel cells are not, in fact, ready for cost-effective mass production. The Hindenburg report also alleged that Milton appointed his brother Travis to serve as “Director of Hydrogen Production/Infrastructure,” despite his appearing to have no experience in the field.

It’s hard to know how this story will play out in the coming weeks and months;  for now, the degree to which Nikola actually developed the technology it claimed to have developed is unclear. Many, however, are already comparing Nikola to Theranos, the much-hyped blood-testing firm with an iconoclast CEO that inked lucrative deals with companies like Walgreens and Safeway before its elaborate claims about proprietary technology turned out to be a lie. As with Theranos, it’s too easy to heap all the responsibility for Nikola’s potential implosion onto an idiosyncratic young founder. Like rapid small-volume blood testing, zero-carbon ground shipping is well worth rooting for. The disasters came in part from the financial world’s presumptive trust in shiny claims from charismatic executives.

While Nikola has yet to generate any meaningful revenue, theoretically it could still, under new leadership, start producing and selling successful hydrogen vehicles in the years to come. Despite the company’s rocky start, that would be a good thing for a world in desperate need of low-carbon shipping. Currently, the Nikola story is one more piece of evidence that start-up founders aren’t the climate saviors they and their rich, gullible investors seem to think.