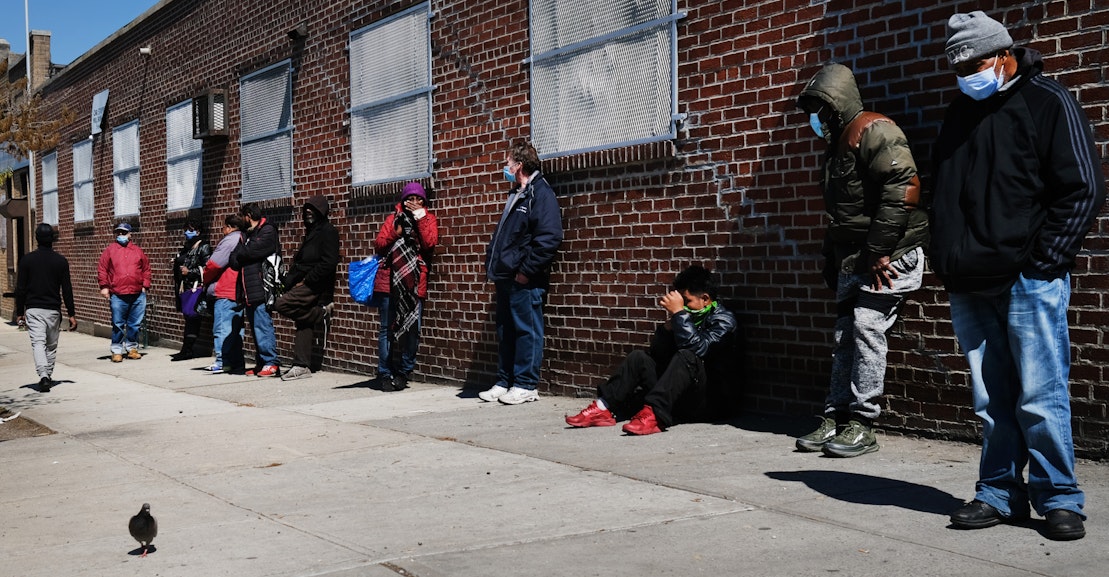 The single most important thing to understand about the coronavirus pandemic so far is that it has not affected everyone the same. (Though if you are the president, you could start with acknowledging that it affects more people than “virtually nobody.”) We are not “all in this together.” In fact, for a lot of pretty well-off people, things are mostly fine. In keeping with how we do everything else, America is botching this aspect of responding to the pandemic. We are failing the poor, most notably those who are struggling with the economic fallout, but also those who have been exposed to the virus—and we may never know exactly badly we let them down.

According to research compiled on Covid-19 cases during the first few months of the pandemic, the poorest among us have consistently been hit harder by the virus. In May, the New York City Department of Health reported that people in less affluent zip codes were dying at far greater rates. A recent study published in the Journal of General Internal Medicine, based on data from April and May, reported that those who call out sick from work with coronavirus were more likely to be low income and have less education; 29 percent of those calling out sick were uninsured, roughly three times the percentage of uninsured in the general population. As of mid-May, according to a federal analysis, older Americans who were also poor enough to qualify for Medicaid were four times more likely to get the disease than those who just had Medicare, which covers everyone regardless of income.

These dynamics may have changed throughout the pandemic, as cases spread outside of clusters in places like New York and we started to see more scolding stories about naughty millennials spreading the virus at bars (as opposed to their naughty governments reopening bars before it was safe). After all, it makes sense that as lockdown measures eased, more people who had previously been financially stable enough to avoid leaving home for work would get sick. In the height of the strictest lockdown measures in the spring, in the hardest-hit states, those with no financial choice but to work were far more likely to be continuing their previous daily routines.

We will never know the name of every person who died from coronavirus, nor every fact and facet of how this disease spread, who was most affected, who was most let down. But we are nevertheless missing key data on how this virus has affected different income groups. The CDC keeps data on cases and deaths by race/ethnicity, age group, and gender. It has data for outbreaks in prisons and cases among health care personnel. The Centers for Medicare and Medicaid Services has data on nursing home deaths, though they report fewer deaths (54,437) than the Kaiser Family Foundation’s tracker (80,006).

Yet it is still hard to find a good, definitive answer for just how much worse the virus has been for low-income Americans. We know it is worse, and we know it is worse for people of color, who also tend to be lower income (though the virus has been worse for people of color across the income spectrum). The answers we do have tend to come from pieces of academic research, like those mentioned above, not our government. But we will never know exactly how far this has been a disease of poverty, and every day that we continue without this data, the harder it will be to ever get a clear picture about how this disease has impacted the United States.

There are obvious challenges with collecting data on the class distribution of coronavirus cases and deaths. People don’t like to talk about their income; race and ethnicity are something that can, in some cases, be observed by medical staff, but income can’t be guessed at so easily. And the particular character of American income inequality, where rich neighborhoods can sit right next to poor ones, means data at the city or county level can obscure class differences; Los Angeles County has Beverly Hills and Bel Air, but also one of the poorest zip codes in America. The CDC only keeps county-level coronavirus data, though some states and cities keep more granular data; hard-hit Los Angeles provides city and community-level data, from which some conclusions can be drawn. (Rich West Hollywood has 14 deaths per 100,000; mid-gentrification East Hollywood has 147.) Gaps in the available data are, perhaps, inevitable. Still, it seems likely that this will be another instance in which the plight of the poor will remain largely obscured for no particular reason other than indifference.

Every now and then, a reporter uncovers a new angle of oppression in the lives of low-income, low-profile Americans, a particular note in the background hum of misery in this country. In 2018, The New York Times reported on how big companies like Walmart successfully demand money from accused (sometimes falsely) shoplifters. In 2019, ProPublica covered a town in Kansas where debt collectors have managed to wrangle themselves “a government-sanctioned shakedown of the uninsured and underinsured,” arresting people who cannot pay their medical bills. Just last week, The New York Times explored how nursing homes evict unprofitable Medicaid patients with spurious claims of psychiatric distress.

These are a few examples of very particular grifts that the state allows to be run on the poor; it’s likely that there are countless similar stories, about other hidden schemes, that have yet to be written about. (When the wealthiest among us can afford to influence politicians to keep their hands off their money, the richest vein left to tap are the people with no money.) I bring these scams up not because they have anything to do with coronavirus, but because it is only occasionally that stories like these, which cast a light upon one particular grotesque angle of inexcusable torment, manage to break through into the public eye—and it is even rarer that such stories provide accountability or spur policy change. We lack a good public record of exactly how much bullshit low-income people put up with, and the absence of good data on the extent of the coronavirus pandemic among low-income people is just another gaping hole.

We are killing people twice: Once by virus, and again by forgetting about them.