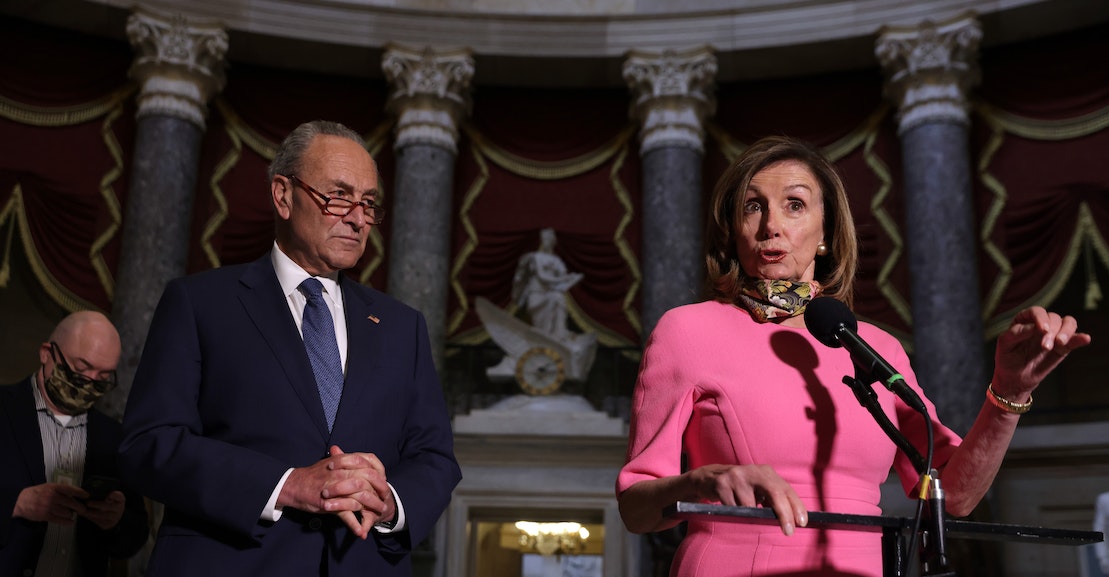 On Friday night, Supreme Court Justice Ruth Bader Ginsburg’s death shocked an already reeling country. What came next, however, was sadly unsurprising. Mere hours after Ginsburg’s passing, McConnell had already affirmed that he would hold a vote for Trump’s nominee to fill the vacancy, contravening the ersatz standard he set out in 2016. Or, as Senator Chris Murphy put it, “Nobody’s word means anything in this place anymore. All that matters is raw power.” It’s a bit of a belated realization: Republicans are unafraid to use their power to achieve their desired ends. Will Democrats respond in kind?

Contrary to their own representations, Democrats do have power to wield. Whether in the House, where they hold the majority, or in the Senate, where a sizable minority and procedural maneuvers afford options, Democratic lawmakers have a few tools in their belt. No one should imagine that these are foolproof: Democrats could release every arrow in the quiver and still come up short. It is nevertheless essential that they fire off their volley in spite of that risk. Taking the shot, even and especially if they miss their mark, will only bolster the case for the structural reforms that must follow in Trump’s wake, while teaching Republicans that actions have consequences.

This course of action goes against the Democratic Party establishment’s every instinct. Throughout Trump’s tumultuous first term, Democrats have been faced with one desperately important fight after another, many of which were winnable, if not easily. With very few exceptions, they have refused to jump into the ring.

Underlying this timidity seems to be the misguided belief that voters will reward the party for its restraint. Nothing, in reality, bears this out. Republicans are eager to label even the most innocuous Democratic action partisan and to send that assertion into a conservative media ecosystem that echoes and amplifies the claim, no matter how ridiculous. Ever fearful of how they’ll be perceived if they try to exert what power they have in a maximal fashion, Democrats take refuge in the safety of inaction.

That inaction de-energizes the party’s base, which presumably put it in power to, well, govern. Indeed, to the degree that Democrats have suffered electoral consequences as a result of partisanship, it is, arguably, for not having been partisan enough. The defeats of several senior Democratic House members (and numerous other near misses) in this year’s primaries owed, in part, to a perception that these figures were not doing enough to oppose Trump (or indeed, doing too much to aid the other side).

The consequences of this surrender have not only been political. Setting aside the unknowable, alternative reality in which House Democrats took up more fights, it seems safe to assume that taking up the same fights with more conviction would have produced a terrain at least marginally better than our current hellscape. Instead, leadership has focused on downplaying even the most minimal steps. It’s not hard to grasp how labeling your own proposals as mere “messaging” bills might suggest to the public that these measures are not worth fighting for. No one wants to waste their time on a losing battle: If Democrats want to rally public support, they need to fight like they think they can win, and as hard as the evident stakes (which seem to include the preservation of our democracy) merit.

Let’s start with the Senate. Although Democrats may not hold the majority, they are not without options. There are scant legislative days left in the year, let alone prior to the election. And if Democratic candidate Mark Kelly wins the Arizona special election (as he is currently favored to do), Mitch McConnell’s window of opportunity may close on November 30. As others have detailed, Democratic senators can use a full arsenal of procedural tricks to gum up the Senate’s gears just at a moment when Republicans need things to run smoothly.

By continuously objecting to unanimous consent and forcing Senate Republicans to pull together a 51-vote quorum to conduct any business, Democrats can significantly slow operations. While campaigns are ongoing, this has the added benefit of pulling Republican senators off the campaign trail. With more Republican incumbents facing competitive challenges, this will have an uneven—dare we say partisan—effect. This mustn’t scare Democrats off.

As Senate Democrats reduce the volume of business that can make it through the chamber on any given day, Democrats in the House can be using their hard-earned majority to lengthen the list of demands on the Senate’s dwindling time. Namely, they can send an unending stream of articles of impeachment the Senate’s way to keep the chamber busy from here until January 3. God knows, there are no shortage of targets worthy of the honor.

Impeachment trials are privileged, meaning McConnell can’t simply ignore them the way he does House messaging bills. This does not mean that he can’t find workarounds. There is, for example, no prescribed minimum length of time that an impeachment trial must last, beyond what is necessary to perform the official motions: opening arguments, presentation of evidence, closing arguments, and voting. The process, in other words, can be rushed.

Just because it’s procedurally possible, however, does not mean that it needs to be politically painless. By choosing impeachment targets whose misdeeds implicate regular people’s lives and livelihoods, House Democrats can increase the costs associated with rapidly shutting down trial after trial.

Attorney General William Barr’s name has consistently surfaced as Democratic lawmakers and political commentators consider this strategy. Barr would undoubtedly be a galvanizing first target. But Democrats should not stop there.

Impeaching newly installed Postmaster General Louis DeJoy, for example, would make for a suitable second act. This summer, DeJoy’s aggressive and politically motivated changes at USPS led to widespread, protracted delays. His decision to carelessly upend a piece of critical infrastructure put lives immediately at risk: Millions across the country rely on the postal service to receive essential prescriptions. And, as the public outcry over the changes demonstrated, people from all walks of life took notice. If House Democrats impeach DeJoy for threatening USPS and the ability of millions to access necessary medication, it would hardly look like a stunt. DeJoy has done credible harm during his tenure, and Senate Republicans will not be able to wave away the inquiry without suffering political consequences.

Next, House Democrats should impeach Secretary of Health and Human Services Alex Azar. From the start of the pandemic, the former Big Pharma lobbyist has consistently shown that he is more concerned with protecting the president’s reputation than with protecting lives. His actions, from releasing unscientific coronavirus guidance and testing guidelines to effectively taking control of the Food and Drug Administration, have resulted in an untold number of avoidable deaths and immeasurable damage to public trust in public health agencies and, by extension, an eventual vaccine. Brushing these crimes under the rug after they have taken center stage in an impeachment drama is likely to prove painful, for even the most shameless Republican senator.

While the House Judiciary Committee is passing these and other articles of impeachment, the House Foreign Affairs Committee can be contributing to the effort by passing War Powers resolutions (which are also “privileged”) for the dozen-odd conflicts for which there is no congressional authorization. Ending endless wars is long overdue: Why not start now?

Democrats can also gum up the works by simply doing the thing that voters sent them to Washington to do in the first place: repeatedly pass bold, popular legislation in the House that might form the spine of a 2021 governing agenda. This is precisely what the Democratic House did during Hoover’s final two years in office, from 1931 to 1932. By doing everything from expanding unemployment benefits to preventing Big Pharma profiteering, House Democrats can make clear the Senate has more pressing matters to attend to than instantiating the multigenerational hopes of a lame-duck president and Senate majority.

It should be said that, even if Democratic lawmakers deploy all of these weapons and others not even mentioned here, victory is not assured. Senate Republicans will counter each maneuver in ways both foreseeable and unforeseeable. In the end, they might prevail.

This does not mean that the fight is not worth having. The stakes are such that any chance of success should be exploited. And in this case, political considerations further bolster the case for righteous action. If Democrats fight and, critically, fight like they intend to win, there are considerable political upsides.

Democratic voters are, through the force and speed of their mobilization, calling into question old political wisdom that says they are less engaged in Supreme Court politics. By throwing off the fear of being labeled partisan and throwing themselves into this fight with all they’ve got, Democratic lawmakers can capitalize on this outpouring of energy to bolster their electoral position in the short term and buoy their agenda over the long run.

If Senate Democrats retake the majority, they will likely find that having fought the good fight will help make the case for the reforms that must come next. Already, public and institutional support for measures once deemed radical, like abolishing the filibuster and rebalancing the courts, is growing. But many remain unsure about these transformative measures. As Senate Republicans prepare once again to entrench their power by any means, Democrats have an opportunity to make the case to those who are unconvinced. By treating Republicans’ own court-packing as the norm-breaking, anti-democratic maneuver it is, Democratic lawmakers can demonstrate that only bold measures will be equal to the task of reversing the damage and ensuring that our institutions are more resilient to authoritarian threats moving forward.

Finally, it is not only satisfying but rational to punch the bully stealing your lunch money when there are no teachers around—if you never punch back, why wouldn’t Mitch McConnell continue dining out on your money? Especially since the stakes are choosing the ultimate “principal” in this metaphor, the Supreme Court.

Democrats’ choice in this moment—to exercise restraint or to fight—does not just have implications for a lifetime appointment to the highest court (although that, in and of itself, is worth fighting for). Whether they realize it or not, Democrats’ actions now will help to dictate the bounds of what is possible in Trump’s wake. For the sake of our democracy, they must fight like hell.