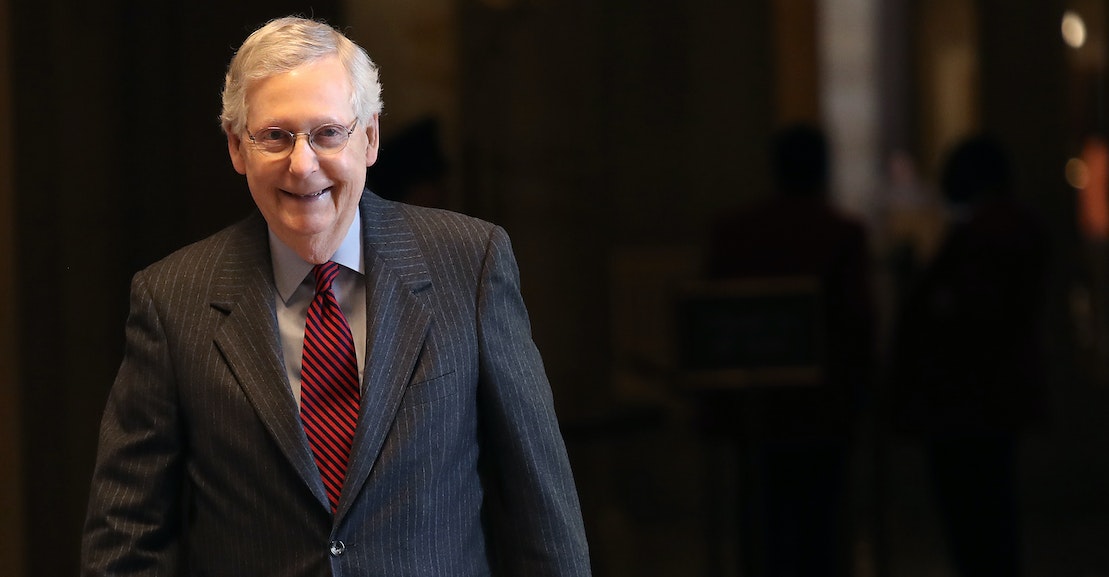 McConnell’s hypocrisy
in this matter is so naked that it’s given at least momentary pause to Senators Susan Collins and Lisa Murkowski. It may also lose him
the support of Senator Mitt Romney.

For most
people, the news that McConnell is being unprincipled will be roughly as
surprising as the news that professional wrestling is staged. Still, we need to
give this instance our attention, if for no other reason than to observe a sad
decline in the art of political chicanery. American politicians have been
bamboozling the public since the dawn of the republic, but in bygone days they
at least tried to sound convincing. There was such a thing as skill, damn it,
and craft.

No more.
McConnell (and Trump, for that matter) have abandoned artful sophistry for mere
gibberish. It makes a sort of cockeyed political sense. Why make a big effort
to deceive when you’re no longer actually trying to convince anybody? These
days, Republican politics is more about herding voters than persuading them.
But we shouldn’t let it pass without protest that the American voter is being
treated like cattle.

Here’s what
McConnell said about ramming a Supreme Court nomination through the Senate in
six weeks:

In the last
midterm election before Justice [Antonin] Scalia’s death in 2016, Americans
elected a Republican Senate majority because we pledged to check and balance
the last days of a lame-duck president’s second term. We kept our promise.
Since the 1880s, no Senate has confirmed an opposite-party president’s Supreme
Court nominee in a presidential election year.

By
contrast, Americans reelected our majority in 2016 and expanded it in 2018
because we pledged to work with President Trump and support his agenda,
particularly his outstanding appointments to the federal judiciary. Once again,
we will keep our promise.

President
Trump’s nominee will receive a vote on the floor of the United States Senate.

As has been
noted widely, McConnell did not, back in 2016, say that blocking President
Barack Obama’s nomination of Merrick Garland had anything to do with the Senate
going Republican in 2014. His argument rested entirely on the fact that there
would be a presidential election that year (even though it was more than half a
year away). There was nothing unusual about that. Since 1900, the Senate has confirmed
a Supreme Court justice during a presidential election year no fewer than seven
times.

What
McConnell could have said truthfully was that no Senate since the 1880s had
confirmed an opposite-party president’s Supreme Court nominee in an election
year—except when the nomination was made the year before. (Reagan
nominated Kennedy in November 1987.) But that’s awfully complicated, and not
particularly salient. So McConnell jettisoned that final clause—or perhaps
just couldn’t remember it.

The only
questions that matter are whether there was a good reason not to proceed with Senate
confirmation in 2016, and whether there’s a good reason today. In 2016,
McConnell says there was. According to his updated 2016 rationale, Americans
had elected a Republican Senate to provide a “check and balance” to Obama. But when
did “check and balance” come to mean “obstruct”? McConnell doesn’t consider
that Americans might have elected a Republican Senate so that Obama would
nominate a moderate of whom Republicans had spoken highly in the past. Which is
what Obama did in choosing Judge Merrick Garland. The effort got neither man
anywhere.

In the
present circumstance, McConnell says that failing to confirm a Supreme Court
nominee would be wrong because the American people chose a president and Senate
of the same party. The only common thread with his retrofitted argument about
2016 is cynicism.  Just as divided
government, in McConnell’s mind, meant “obstruct” in 2016, nondivided
government in 2020 means “rubber stamp.” Neither formulation recognizes the
Senate’s constitutional role to advise and consent, and in general to be a
separate branch of government from the executive.

The most
risible McConnell argument from 2016, back then, was his indignation against
interrupting the sacred process of electing a president with a base partisan
battle over a Supreme Court nomination. Today those comments seem even more
ridiculous.

“Given that
we are in the midst of the presidential election process,” McConnell wrote in a
2016 op-ed he coauthored with Senator Chuck Grassley, “we believe that the
American people should seize the opportunity to weigh in on whom they trust to
nominate the next person for a lifetime appointment to the Supreme Court.” On the
day that op-ed was published, the election was more than eight months away.

Today
circumstances are different, but not in any way that’s helpful to McConnell’s
argument. We are not “in the midst of the presidential election process.” We’re
in the midst of a presidential election. Election Day may be six weeks away,
but mail-in voting began in North Carolina on September 4. Mail-in and in-person
voting are now underway in two dozen states. By Friday or Saturday, when Trump
says he’ll announce his choice, the majority of states will have started
voting. McConnell’s contempt for this process could not be more obvious.

I’m not
telling you anything you don’t already know. But that’s my point. McConnell’s
bad faith, which was never much of a secret, has become overwhelmingly obvious,
like a really bad hairpiece on a Russian oligarch. There’s no finesse at all;
no art, no effort. To rework that old truism about hypocrisy, McConnell’s vice
can no longer be bothered to pay tribute to virtue. That’s as insulting as it
is depressing.