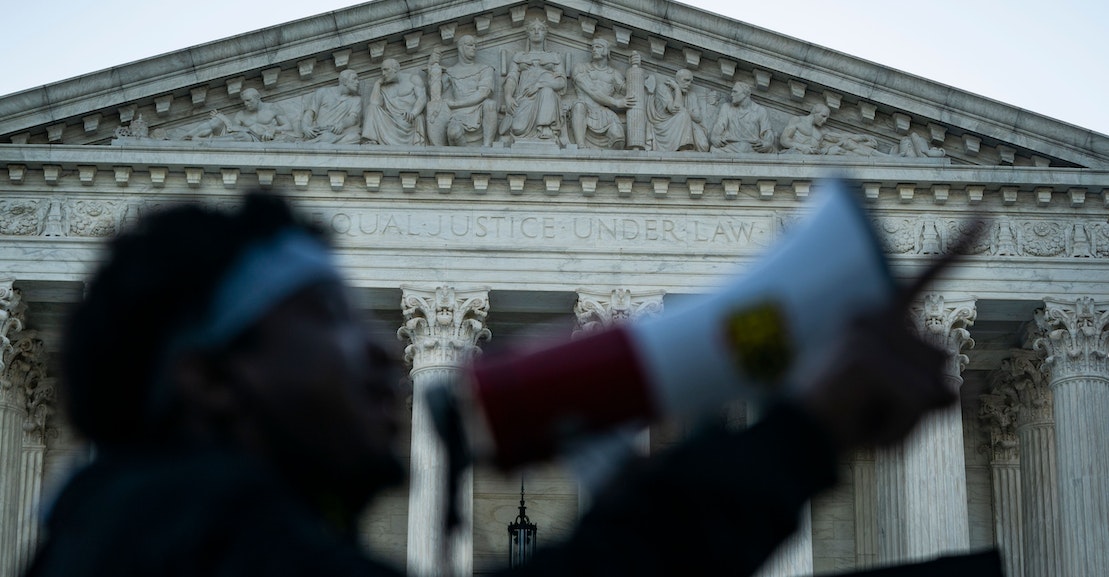 There are two great losses in Ruth Bader Ginsburg’s death. First and foremost among them is the person herself. The 87-year-old justice was a tireless and formidable figure in American law—an impressive jurist during her nearly three decades on the Supreme Court and a groundbreaking advocate for women’s rights throughout her entire legal career. She is mourned not just by those who respected and admired her but also by those whose lives were made possible by her victories and those who found her a source of inspiration to advance the cause of justice even further.

The other loss is for the American republic. Her death marks the third time in four years that the Supreme Court’s ideological balance is up for grabs, and likely the third time that it will move the court even further to the right. Conservatives are now emboldened to pursue more aggressive victories at the high court; liberals, stung by yet another defeat, are now considering more sweeping reforms of the court itself to reverse the tide. No matter who President Donald Trump chooses to replace Ginsburg, their confirmation battle will likely be an ugly, toxic exercise in political theater.

There remains only one solution to the warping disruptions of America’s judicial wars: End them altogether. End the confirmation process that displays the worst qualities of lawmakers on both sides and undermines two branches of government at the same time. End the partisan timing of justices’ retirements and the morbid instability that ensues when they die in office. End the sprawling, donor-fueled machinery that pre-screens judicial nominees most favorable to its agenda and helps install them. There is a better way—one that preserves the independence of the courts while ensuring regular turnover and which allows the people’s branches to shape their future without undermining them.

How did it come to this? Liberals pin most of the blame on Mitch McConnell, one of the most nihilistic figures in American political life. But for all of his deleterious effects on American democracy, neither McConnell nor any other senators “stole” a Supreme Court seat in 2016. As I noted last year, presidents have every right to nominate a Supreme Court justice when a vacancy arises, and the Senate has every right to consider (or not consider) that nominee. McConnell’s justification was shamelessly disingenuous: Republicans couldn’t say outright that they want to impose a certain ideological vision upon the courts, so they conjured up the “Biden rule” (or “McConnell rule” or whatever you want to call it) as a convenient excuse not to consider well-qualified nominees like Merrick Garland. Republicans’ justifications for their reversal on these “rules” this year may be risible, but the underlying realpolitik is sound.

That’s why it’s also unrealistic for liberals to expect that conservative Republican senators, who owe their seats to conservative voters and conservative donors, will turn down the opportunity to place conservative justices on the Supreme Court. If Democrats controlled the Senate right now, they would not hesitate to block whomever Trump nominates to replace Ginsburg, and everyone to the left of Joe Manchin would not hesitate to support it. If Democratic voters had turned out in sufficient numbers in key states in 2016 to help ensure Hillary Clinton’s election, this entire debate would be very different. McConnell threw down a gauntlet four years ago that Democrats did not pick up, and they will likely regret it for decades to come.

Despite all of this, there’s an underlying kernel of truth in liberals’ concerns about the Supreme Court’s legitimacy. Republican presidential candidates have won the popular vote in only one of the last seven elections. By the end of the year, it’s likely that one-third of the court’s current justices will have been chosen by a president who didn’t win the most votes in an election. The Senate’s anti-democratic structure also strongly favors small states over more populous states. In 2018, for example, Republicans expanded their majority by two seats despite receiving roughly seven million fewer votes in the Senate races than the Democrats—and that’s after excluding 11 million votes cast in California, where two Democrats vied for the open Senate seat without a GOP opponent.

So while Republicans have the power to implement their vision for the courts, it’s only because our systems allow them to hold power without receiving the most votes. To make matters worse, the judges and justices they install will likely hold views out of step with most Americans on major issues. Survey after survey shows that a sizable majority of Americans want Roe v. Wade to remain the law of the land. Supermajorities of Democrats, Republicans, and independents alike don’t want gay and transgender Americans to face employment or medical discrimination. A majority of Americans supported the high court’s decision in June that fended off a Trump administration attempt to rescind the Deferred Action for Childhood Arrivals program. A Supreme Court with six reliably conservative justices is far more likely to be out of sync with those preferences (and others) in the future.

That ideological trajectory, plus the actuarial math behind possible future vacancies, means that the Supreme Court will likely be hostile to progressive policy goals for at least a generation. This realization is pushing liberals toward proposals that would have been unthinkable five years ago. A growing number of lawmakers and commentators are warming up to the idea of court-packing to offset Trump’s influence. Others are taking a look at jurisdiction stripping, a practice by which Congress could limit the Supreme Court’s power to review certain cases. Some have even questioned judicial review itself, proposing that future presidents could simply treat the high court’s rulings as advisory or ignore them altogether.

Most of these ideas are only possible because of the vagueness of Article III, which briefly lays out the power and structure of the federal judiciary. Because the Constitution does not say how many justices serve on the Supreme Court, for example, Congress is free to pursue court-packing if it wishes. Article III is so under-written that, in theory, the entire federal judiciary could constitutionally consist of a single district court, staffed by one federal judge, whose decisions would be reviewed by the chief justice acting as a one-person Supreme Court. Fortunately, the Founders instead opted to create multiple district courts and a Supreme Court with six justices in the Judiciary Act of 1789.

Initially, the justices also heard some appeals by “riding circuit.” Each justice was assigned to a “circuit” and traveled from courthouse to courthouse by horse (and later, by train) to individually hear and review cases within the circuit. The connection between the justices and their respective “circuits” persisted throughout the nineteenth century. In 1807, Congress established a seventh circuit to hear appeals in Ohio, Kentucky, and Tennessee—and created a seventh Supreme Court seat to go with it. An eighth and ninth seat followed in 1837 with the creation of an eighth circuit further west, followed by a tenth seat when Congress established a tenth circuit for Oregon and California.

The connection between the number of circuits and Supreme Court seats ruptured under the presidency of Andrew Johnson, a proto-Trumpian figure who bitterly feuded with Republicans in Congress over Reconstruction. Congress passed a law in 1866 to abolish up to three Supreme Court seats when they became vacant to deny Johnson the chance to nominate a justice, then scrapped the law after he left office. One seat had already been abolished by then, and the court’s membership has remained at nine justices ever since. Circuit riding itself largely disappeared a few decades later, thanks in part to an 1889 incident in which Justice Stephen Field was attacked while riding circuit by the former chief justice of California’s supreme court, who was shot dead by a U.S. marshal assigned to protect Field.

Today, each of the justices is still assigned to one or more circuits but only to hear emergency motions in cases from those circuits and carry out other administrative tasks. That bond should be restored through a constitutional amendment that would put the federal courts on more solid footing. Its goal would be to establish a neutral system for replacing Supreme Court justices while preserving the independence of the judiciary. I first proposed this system last year, and I’ve only become more convinced of its necessity since then. If done properly, it could end a vicious cycle surrounding Supreme Court nominations before it spirals any further out of control.

What would this amendment look like? First, it would remove the president and the Senate from deciding who gets to be a Supreme Court justice. Each of the Supreme Court’s seats would be assigned to one of the federal judicial circuits, and the justices who hold those seats would serve staggered 18-year terms. When a justice’s term ends, the next justice would automatically be chosen by lottery from among the active federal judges within that seat’s respective circuit. (If a justice resigns or dies before their term ends, their replacement would only serve for the remainder of the term.) Departing justices would automatically receive a seat on the circuit court to which their former seat was assigned.

Right now, there are 12 federal circuit courts of appeal with a geographic jurisdiction: the First through Eleventh Circuits, as well as the D.C. Circuit. That would produce a Supreme Court with 13 justices, comprised of the chief justice and 12 associate justices, had Congress not abandoned the system in the 1860s. The amendment would also effectively abolish court-packing, by freezing the number of federal circuit courts at their current size and number, and thus fix the number of seats on the Supreme Court.

Nothing would change for federal judges in the lower courts, who would still be nominated by the president and confirmed by the Senate. This would ensure that the democratic branches still determine who (eventually) becomes a Supreme Court justice. At the same time, it would reduce all of the perverse incentives and partisan jockeying that currently surround the process. With lower stakes for each individual nomination, senators would feel less pressure to support or reject unqualified and controversial judicial nominees. That would strengthen not only the Supreme Court but the federal judiciary as a whole.

With clear term limits and a less partisan replacement process, Americans would also be spared future instances of the macabre discourse that surrounded Ruth Bader Ginsburg’s health over the past decade—as well as the troubling incentives for her and other justices to time their retirements under certain presidents. It would also square the circle that bedevils most Supreme Court reform proposals. Term limits allow for stable transitions and regular turnover. Life tenure guarantees judicial independence and reduces the risk of corruption. By providing outgoing justices with an automatic seat on the lower courts when their term ends, this system would provide both.

Unfortunately, the best part of this proposal is also its greatest weakness: It doesn’t benefit any particular side. Conservatives would be risking their current edge on the Supreme Court by adding new seats, even if the justices who fill them are chosen at random. Liberals would be forsaking the chance to pursue more sweeping reforms of the Supreme Court as an institution, as well as the opportunity to bend it to their will as Republicans have over the past 20 years. But as long as both sides care more about winning the judicial wars than ending them, the damage will only get worse.