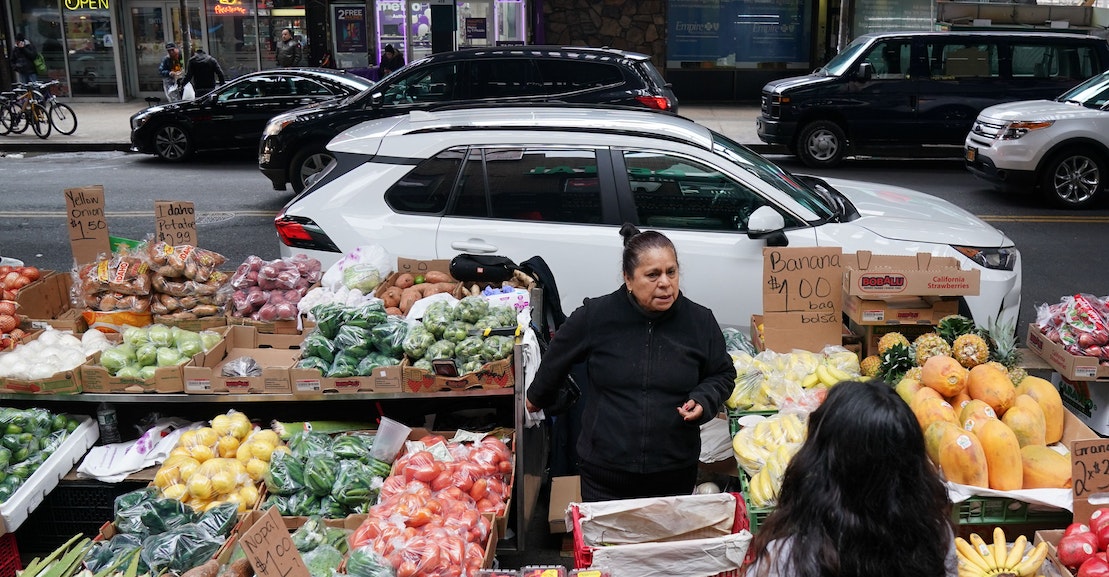 On an evening in late September at Corona Plaza, an open-air commercial hub in Queens, the bachata blaring from a Boost Mobile competes with the noise of trains clattering overhead; kids on scooters dart around clusters of teens taking selfies; and inescapable franchises like McDonald’s and Dunkin’ Donuts share real estate with makeshift vending food carts hawking tacos, tamales, pork rinds, elotes, fruit juices, and arepas. It’s a busy scene, and the kind of place people conjure up when they think about New York City. “To come to this city is a great opportunity,” Froilan Flores told me in Spanish as the steak bits cooking on his cart released curly tendrils of smoke into the newly chilly air. “This is one of the greatest cities in the world.”

For seven years, Flores worked as a buser at a café in another Queens neighborhood, but he found himself out of a job when New York’s stay-at-home order went into effect in March. Soon, his bills were mounting and he fell behind on his rent on a duplex he shares with three other immigrant families from his native Puebla, Mexico.

Flores wasn’t the only restaurant worker to lose his income during the pandemic, but he was, like millions of undocumented workers in this country, locked out of the unemployment and other benefits that have kept so many of his industry colleagues above water. “If it comes, it comes,” Flores remembered thinking early in the pandemic about whether he’d receive stimulus aid. That sense of resignation was common: Many vendors I spoke with said that they didn’t bother looking for state support, assuming they wouldn’t qualify. Others, though, said they were surprised that they were ineligible because, despite their undocumented status, they paid their taxes using their Individual Taxpayer Identification Number.

Without other support, Flores turned to vending, joining workers throughout the city who, often excluded from the same systems, feed others to help feed themselves and their families. “There has definitely been an increase in street vendors in Corona, and across the city,” Carina Kaufman-Gutierrez, deputy director of the Street Vendor Project, which provides legal and advocacy support to street vendors, told me. “There is a need to be your own source of income when a crisis happens.”

Since the economic downturn induced by Covid-19, social service agencies across the city report that upward of 90 percent of their immigrant clients have lost their job. Before the pandemic, despite their labor participation outpacing U.S.-born citizens’, New York’s undocumented immigrants were the city’s lowest earners. That means that, beyond losing income now, there are little to no savings for people to fall back on.

Gabriela Almaraz has been cleaning houses for nearly 25 years, since she first came to the United States from Mexico in 1996. As the cleaning jobs dried up in March, she started selling food from her house as a way to make ends meet. But as the pandemic got worse and the service economy began hemorrhaging jobs, she said, “people stopped working and couldn’t order food, so I headed to the street.”

Standing nearby, Gabriela’s sister-in-law, Miriam, interrupted to add that the story was actually bigger than just that: Gabriela’s husband was a chef at a restaurant in Manhattan who was laid off in March. In June, he was diagnosed with colon cancer. With her husband unable to work because of chemotherapy treatments, Gabriela has become the sole breadwinner for her family. “People complain, Look, they are not scared,” she said of those who may be critical of the workers congregating in the plaza to sell food and other things. “It’s a necessity.”

So far, New York State has paid out the equivalent of 20 years’ worth of unemployment benefits to 3.5 million New Yorkers, or the equivalent of $43.7 billion, according to local news outlet The City. Yet the people on the plaza vending, like Gabriela, haven’t received a dime of it.

“There is a lot of unemployment and housing insecurity, and undocumented folks have been excluded from all government support,” Kaufman-Gutierrez told me. “Vendors have also been excluded from small business relief, whether it is due to their immigration status or the informal nature of their work.”

The Street Vendor Project has responded with mutual aid, creating the Street Vendor Covid-19 Emergency Relief Fund. “With the support of almost 1,000 people,” Kaufman-Gutierrez said, “we have raised $145,985, which so far has allowed us to support 426 street vendors with $300 in assistance.”

It has also partnered with 170 other organizations in the Fund Excluded Workers Coalition in order to pressure Governor Andrew Cuomo to support a bill that state Senator Jessica Ramos and Manhattan Assemblywoman Carmen de la Rosa sponsored, which would tax the unrealized capital gains of billionaires in order to establish an Excluded Workers Disaster Income Replacement Fund.

At the city level, the mayor’s office partnered with the Open Society Foundation to provide $20 million in relief to immigrants ineligible for state or federal assistance, which was supposed to “jump-start donations from other philanthropists.” But by August, the additional donations still hadn’t materialized, and none of the vendors I spoke with that night knew about the program, much less applied.

When I asked Gabriela what she’ll do when the weather gets colder, she pointed to a homemade marquee sign adorning her stand and said she’d emboss business cards with it and have her 14-year-old son deliver to people’s homes. Ideally, she’d like to work in a restaurant, but failing that, she said she enjoys vending and wants the opportunity to get a license. Currently, New York City caps mobile food vendor permits and licenses. Street vendor advocates have pushed legislation to lift the cap but so far have had little success. “Without access to get permits or licenses from the city due to the 37-year cap,” Kaufman-Gutierrez noted, “the city is creating a situation where vendors are vulnerable to fines and harassment, criminalizing people for just trying to work and make a living.”

Dolores Madariaga, who started vending in April, was at first more concerned about the police than the cold weather. In May, the New York Police Department’s 110th Precinct fined vendors in Corona Plaza for selling tamales and flowers without a license, threatening to arrest one vendor because she didn’t have a form of ID, while warning of confiscating the property of others. But since June, when Mayor Bill de Blasio announced cops would no longer have oversight over street vendor enforcement, NYPD harassment and intimidation have largely abated.

Since the pandemic, Madariaga is working 12 to 14 hours, including prep time. Despite the long hours, she said she counts her blessings. “We had no help from the government. We spent our savings on rent, gas, and light bills. So we had to come to the plaza,” she explained, adding that her husband was laid off in December from his construction job and was not called back when the weather warmed due to the pandemic. “Now we are lucky that the police and sanitation aren’t harassing us or ticketing us.”

In the pandemic economy, street vendors are also community stewards in a time of crisis: feeding neighbors who, like them, have been excluded from relief. In Sunset Park, Brooklyn, the Street Vendors Project, in partnership with council members Vanessa Gibson and Carlos Menchaca, joined forces with the Stavros Niarchos Foundation to employ local street vendors to prepare and distribute 1,100 weekly meals through September. In Queens, immigrant street vendors have distributed 6,000 hot meals and pounds of produce. The state has largely turned away from these workers, but they haven’t turned away from their communities.

“I like to get ahead on my own labor,” Mercedes, a member of the Street Vendor Project with over a decade of experience in vending, said, while the embers of her makeshift grill glowed orange. Mercedes explained how immigrant customers come to Corona Plaza from far-flung towns in New Jersey and Long Island, a kind of weekend homecoming. She spoke of an ethos I heard described by other vendors out that night: “Many of us Latinos don’t ask anything of the government. We get by on our dignified and honorable work.”