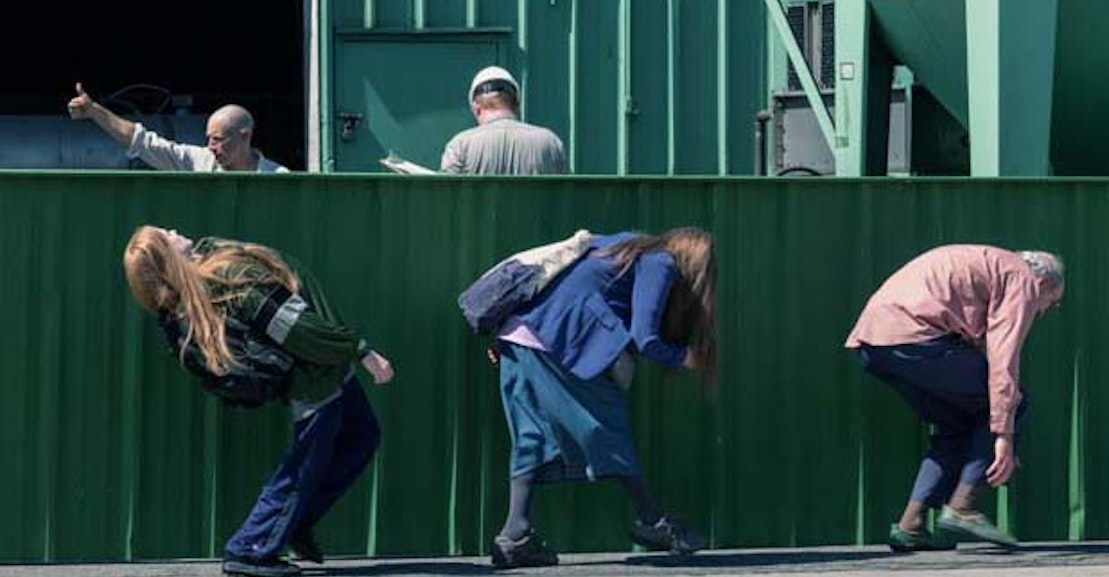 Two closing parentheses, a “less than” sign, a “greater than” sign, then two opening parentheses: ))<>((. Anyone who has seen Miranda July’s 2005 feature debut, Me and You and Everyone We Know, will recognize this code at once. In the film, a soulful five-year-old boy, Robby (Brandon Ratcliff), improvises it while typing in an online chat room with a grown woman: “I’ll poop into her butthole, and then she’ll poop it back into my butthole,” he explains to his older brother, who has initiated the first conversation with her. “And then we’ll just keep doing it, back and forth, with the same poop. Forever.” To the brother’s astonishment—he’s been striving to impress her with whatever he imagines a real man might fantasize about—the woman is disarmed and turned on by this image of profound intimacy. Before long, she’s begging Robby to meet her in person.

Like much of July’s on-screen work, this story line, in which woman and child both eventually show up for their sexual assignation in a park, balances right on the edge between sweetness and repulsion, between alt-weirdness and a humanistic, rom-com–style message about connection, vulnerability, and acceptance. It works on the assumption that most of the population feels we are at heart uniquely freakish. When I first saw it in the theater, it felt thrilling, a little risky, but the recipe is precise: July had intended that “back and forth … forever” would become a huge meme, and that’s what happened. The movie cleaned up at Cannes and was a hit; a lot of people bought the T-shirt printed with ))<>((, and some even got the tattoo.

It’s central to Miranda July’s worldview that the impulse to express, to communicate, to try something weird and see what happens, is a universal one.

July, who usually appears in her own films, started out as a solo performance artist, often inhabiting multiple personae in the course of an hour or two, and her directorial style bears the stamp of that work—eccentric enough to hold your attention, yet not alienating enough to lose anyone in the crowd. She also spent years on a feminist video project (now called “Joanie 4 Jackie”), collecting and circulating short films, and distributing zines in which she interviewed random women on the street, asking what they’d make a film about if they had the time, money, or opportunity. Characters in her movies likewise make video pieces or sidle into sudden dance sequences. Some are artists, but that’s not why they do these things: It’s central to July’s worldview that the impulse to express, to communicate, to try something weird and see what happens, is a universal one. That’s what Robby and his career-woman paramour are each doing in the chat room. And it’s partly what Robby’s shoe-salesman father (John Hawkes) is up to when, in an early scene, during his breakup with their mother, he calls his sons away from the computer to watch him standing in the garden outside the window, having set his own arm on fire. He’d intended, he later explains to July’s character, to replicate a trick he’d seen in which alcohol flames up around an object and then burns out, doing no harm, but hadn’t fully considered the consequences of subbing in lighter fluid: “It’s OK though, it’s better this way.”

There’s nothing all that formally experimental in Me and You and Everyone We Know, a funny, sunny, neatly plotted ensemble piece, and yet by emphasizing the spontaneous make-believe games and secret rituals that people, even or especially strangers, develop with one another when no one else is looking, it creates an unpredictable, conspiratorial mood, as if the audience is being invited to embarrass ourselves as part of someone’s art project. July’s second film, The Future, though less broadly likable, as it focuses on a couple’s mid-thirties doldrums, contains many similar whimsical elements: The male lead can stop time; an emotionally significant yellow shirt crawls after July’s character under its own steam; a foster cat with an injured paw provides raspy, existentialist voice-over narration, waiting for the couple to get it together to bring her home.

In Me and You, July’s sensibility was markedly nonjudgmental, favoring freewheeling spirit over social convention. Adults are childlike, often needy, bewildered by their obligations and unready to commit to much (except the bit); children, left to their own devices, operate pretty autonomously; and, with a bit of luck, no one’s self-discovery seems to come at anyone else’s expense. The Future marked a darkening of tone, and July’s new film, Kajillionaire, though livelier, explores the disturbing notion that just as games have losers, experiments have subjects—and their side effects may vary. At its heart is one of the central problems of maturity—the trade-off between freedom and responsibility. Not quite a critique of the adorable whimsy of her early work, Kajillionaire is a head-on encounter with the psychic tensions that always undergirded it.

The center of the film is Old Dolio (Evan Rachel Wood), a young woman living with her parents, Robert and Theresa (Richard Jenkins and Debra Winger), in a barely habitable basement office space underneath a soap factory. Several times a week, the three of them pitch in with giant mops to fight back an avalanche of pink bubbles pouring from the floor above, a surrealist touch that recalls the wobbly, colored shapes that float across the screen in some of July’s early shorts. Old Dolio’s voice is low and creaky, as if from disuse, and her long, dirty-blonde hair hides her, evoking a prettier Cousin Itt.

Old Dolio’s whole existence has been warped by her parents’ worldview and the tactics with which they support it. “Most people want to be kajillionaires,” Robert says with contempt. “That’s the dream, that’s how they get you, hooked on sugar, hooked on coffee, hahaha, cry cry cry, mother-daughter getaway!” He looks down on consumer culture and rejects participation in the mainstream economy, preferring to skim around the edges, but this ideological framing is designed to serve and conceal his personal neuroses, allowing him to feel superior to the suckers out there, while avoiding the many parts of life that frighten him: He resembles an older, sourer, and more rigid iteration of the John Hawkes character in Me and You, who says “I don’t want to have to do this living…. I want to be swept off my feet, you know? I want my children to have magical powers.”

The parents here are archetypes: Robert a selfish, domineering patriarch who takes out his weaknesses and resentments within the small sphere he gets to control, and Theresa the wife throwing her lot in with him for lack of a better idea, with the occasional apologetic shrug at their daughter. They chose Old Dolio’s name in tribute to a man they hoped would be moved to leave her money in his will (which didn’t pay off). They thought it “seemed insulting to treat you like a child,” and so there were no hugs, no pet names, no vacations. She learned to write by forging checks, and to feed herself by mastering the pentagram security-camera systems used in supermarkets, so that she always knows in which aisles the goods are “free.” She has grown up dodging surveillance cameras and backflipping over barriers: Every time the family leaves their living space, all three abruptly bend 90 degrees from the waist, so that the low wall conceals them from the landlord’s attempts to collect his already nominal rent. Only by accident, when offered 20 bucks one day to impersonate another woman at her mandated parenting classes, does Old Dolio stumble on the news that physical affection is meant to play a role in child development.

Old Dolio’s doubts about her setup grow after meeting Melanie (Gina Rodriguez) while on another of the family’s elaborate scams. In July-world, Melanie counts as that exotic creature, a normal person, who seems almost to have been imported from a lighter movie: bubbly, kind, good at makeup, and much loved if a little suffocated by her mother. She’s ordinary enough to be exhilarated by the idea of joining the family’s antics, which remind her of the Ocean’s Eleven franchise. But the way the couple treat their daughter proves hard for Melanie to stomach. “They’re my parents,” Old Dolio protests when questioned. “In what sense?” Melanie replies. The best answer Old Dolio can come up with is: “We split everything three ways.”

The family’s life of crime is ludicrously petty and unglamorous—their schemes involve enormous effort and ingenuity for very little material reward. Playing on the tropes of heist movies and Mafia dynasties, July continually undercuts them. Kajillionaire also bears a skewed relation to satires on urban graft and poverty, like Parasite. July has engaged with class and inequality mostly by wondering whose art and self-expression the world might be missing out on or refusing to value. Here, oppression decidedly begins at home. The film focuses on intimate relationships, on what people owe each other, how they limit one another: July’s primary interests remain psychological rather than political.

Still, one of the funnier and more alarming elements of the movie is the way the experience of its determined outsiders so closely mirrors life under the capitalist system they claim to reject. In this funhouse parable, the family unit both props up and reenacts a grotesque, exploitative order in which you must use every inner resource you have, work every second of the day just to get by, in which nothing is enjoyable and everyone is competition, or a potential mark. When Old Dolio starts trying to assert herself away from her parents’ manipulations, she excitedly runs around a store choosing all the candy she might want from any aisle (fun! treats! her own desires!)—before realizing at the register that she can’t afford to buy it.

In Kajillionaire, July takes more distance from her characters, and for the first time doesn’t appear on-screen among them. Yet her strengths as a director are still connected to those of the performance artist—especially the ability to hold the frame on her central concerns while letting the ambient mood of the time and place in which she finds herself seep in and color what is shown. Both aesthetically and emotionally, Me and You seemed to grow out of July’s affinity for the West Coast Riot Grrrl scene in the 1990s, treating creativity as inherently rebellious and joyful, as collaborative and social, and available to anyone at any moment. Kajillionaire could only have been made now: It nests all games within the bigger one, and the bigger one is always rigged.