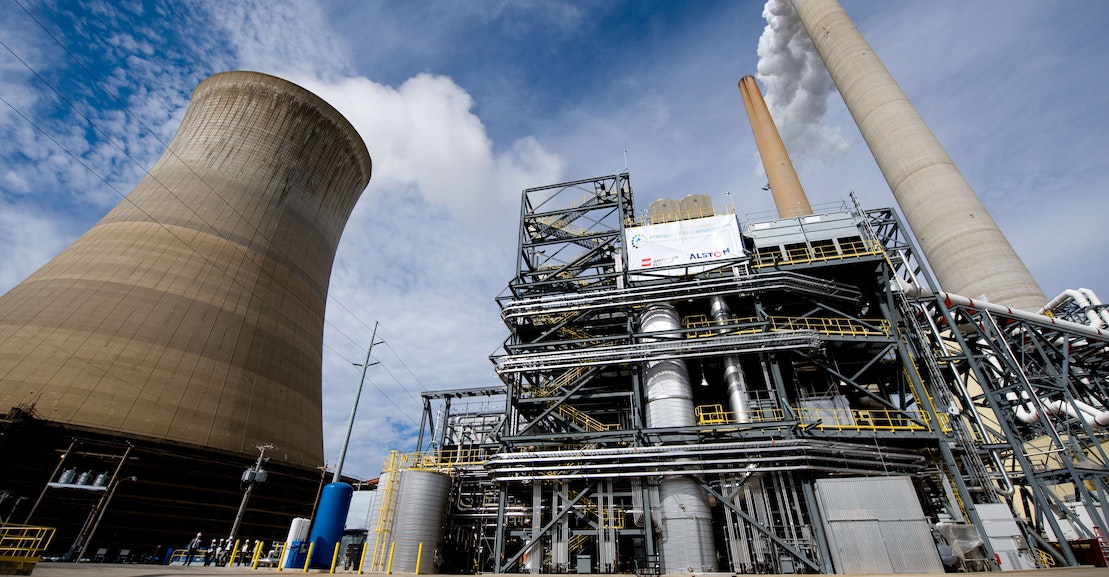 Between 2010 and 2018, the Department of Energy poured $5 billion worth of research and development funding into carbon-capturing technologies, which aim to extract the greenhouse gas from power plants and other industrial activities, limiting the extent to which they warm the planet. In 2018, Congress also passed a generous tax break known as 45Q, encouraging companies to partake. This summer, however, the only coal-fired power plant capturing a meaningful amount of carbon in the United States—the country’s main showcase for that technology—unceremoniously closed down following months of inactivity. It’ll be “mothballed” (switched off) until market conditions improve.

Carbon capture and storage, or CCS, has, at best, a patchy track record. But it’s wildly popular in the fossil fuel industry as a potential fix for the fundamental unsustainability of its business model. This past week has been a big one for carbon capture boosterism. One bipartisan amendment in H.R. 4447—the massive energy bill being debated in the House of Representatives this week—will give companies another 10 years to collect an existing tax credit for carbon capturing and storing carbon. A report out this week from the Global CCS Institute and Columbia University’s Center on Energy Policy argues that boosting government support for CCS will be key to making the technology viable. It recommends additional tax breaks, grants, and R&D funding. The Global CCS Institute, to note, was started with funding from the traditionally coal-friendly Australian government, and its paying membership includes several national governments as well as most of the world’s largest fossil fuel companies, among them ExxonMobil and Occidental Petroleum. Columbia’s Center on Global Energy Policy has received millions of dollars’ worth of donations from fossil fuel companies in recent years, including Cheniere Energy, BP, and ConocoPhillips. ExxonMobil, incidentally, announced on Tuesday that it’ll be expanding its carbon capture partnership with the company Global Thermostat.

Carbon capture—which is an umbrella term for many different technologies—can broadly be divided into two categories: carbon captured directly from the air, and carbon captured from power plants and industrial processes. In theory, the carbon can simply be sequestered in rock formations. Often, though, that captured carbon is transported via pipeline to be injected into oil wells in order to dig up more fossil fuels, in a process known as enhanced oil recovery. Direct air capture uses contraptions that look like air conditioners to draw carbon down from the air, usually funneling it into novel uses like carbonating soft drinks.

This is all well and good; it will be a great development if and when these technologies become commercially viable. For now, that seems a long way off. And the gap between wish and reality is becoming increasingly worrisome as everyone from fossil fuel executives to establishment politicians to the Intergovernmental Panel on Climate Change invests an uncomfortable amount of faith in technologies that are still operating on a remarkably small scale. Many national and international targets for emissions reductions, at present, assume that transitioning to renewables and various economic changes can get us part of the way there and that new carbon capture technologies will emerge to cover the gap by 2050. If a government, politician, or corporation calls to achieve “net-zero” emissions by some date, that’s most likely what they mean.

The carbon capture project that shut down last month—Petra Nova, capturing carbon from one coal-burning unit of a power plant near Houston—wasn’t switched off because it couldn’t capture carbon. It seems to have been pretty good at that, though exact amounts remain the subject of some debate. The coal whose fumes Petra Nova was designed to capture, however, is rapidly becoming more expensive than other forms of fuel, including renewables. And the business model for keeping Petra Nova going simply didn’t work without being able to funnel lots of the carbon dioxide captured into digging up oil; current low oil prices, in turn, meant fewer customers willing to buy up excess carbon to inject into active wells.

Petra Nova’s closure, a recent report from the Institute for Energy Economics and Financial Analysis finds, comes after it received a $190 million investment from the DOE. Another carbon capture project that received generous investments from the DOE during the Obama administration, known as the Kemper Project, also failed after years of cost overruns and mismanagement, racking up $6.4 billion in losses. Ongoing carbon capture proposals for coal-fired power plants in New Mexico and North Dakota are now on shaky ground as well.

Virtually every fossil fuel company in the world right now is leaning into largely unproven, prohibitively expensive new technologies so as to extend the life of its core business model indefinitely.

Not so long ago, market-based mechanisms like carbon pricing and cap-and-trade systems were the great hope of centrist politicians and the fossil fuel industry alike, as economists and multinational oil companies agreed that a modest fee on pollutants was the single most efficient tool for tackling the climate crisis—for some, the only one worth considering.

Neither carbon pricing nor capturing carbon is a bad idea per se. But the way to tell whether an argument for either is being made in good low-carbon faith—rather than to keep a deadly business model going—lies in the emphasis. Most climate scientists, that is, agree some amount of carbon will need to be captured as hard-to-decarbonize sectors like steel and concrete transition more slowly to zero-carbon supply chains than others, particularly to reach ambitious targets to cap warming at 1.5 or 2 degrees Celsius (2.7 or 3.6 degrees Fahrenheit). And not all of that can be done through trees, plants, and soil, the original and still most efficient means on earth for capturing and sequestering carbon.

Yet virtually every fossil fuel company in the world right now is enthusiastically leaning into largely unproven, prohibitively expensive new technologies so as to extend the life of its core business model indefinitely. Token or even earnest investments in carbon capture by fossil fuel producers let them pretend to care about the climate while in reality giving themselves a loophole for keeping expensive, polluting coal plants (for instance) operating and more or less unregulated. Whether they actually reach net zero doesn’t really matter, so long as they can keep up business as usual for a couple more years by, say, slapping a costly government-sponsored doodad onto the top of their coal plant. Bullishness about capturing carbon has been a way, as well, for governments friendly to coal, oil, and gas companies—most recently, Scott Morrison’s Australia—to pay some nominal lip service to climate campaigners’ demands while keeping their favorite companies sated and secure.

In some places, the calculus is sadder. In Wyoming, some 500 coal miners have lost their jobs since March. Eager to stop the bleeding, the state government is now going all in on “clean” coal via carbon capture, with support from the DOE. The promise of preserving coal, oil, and gas jobs indefinitely has made carbon capture an attractive prospect for labor unions that represent fossil fuel workers, which put forward carbon capture as an alternative to limiting or even regulating fossil fuel production.

Still, there’s little reason to see this as more than a Band-Aid that could make things worse down the line, as communities put off planning for the end of what’s historically been their primary economic base. The reason coal, in particular, is declining is because it’s gotten more expensive relative to other fuels. Carbon capture and storage makes coal power even more expensive, and as of now can only really exist with massive infusions of public money.

There are far more direct ways to support people and places struggling through the energy transition: pay older workers to retire early with full pension and benefits; invest in a program on the scale of the GI bill for miners and drillers to find other low-carbon work; pay those workers the same wages they were getting in the extractive sector to clean up some of the country’s three million methane-spewing abandoned wells; provide fiscal support to state and local governments facing budget shortfalls as fossil fuel revenues dry up. Instead, the fossil fuel industry, a small handful of union leaders, and politicians on either side of the aisle seem content to keep pouring billions into costly technologies that offer already struggling communities a slightly slower road toward economic ruin.

Ten years on, Republicans still point to the DOE’s $535 million loan guarantee to failed solar start-up Solyndra during the Obama administration as evidence of government waste; never mind that the cost of solar has declined 82 percent since 2010, thanks in part to the stimulus, or that the program Solyndra benefited from ended up producing a high return on the government’s investment. They’re now eager to write a blank check to a technology that, after 23 years of federal investment, still has almost nothing to show for itself. Research for capturing carbon is a fine way for the government to spend its money, but not if it’s being used as a fossil fuel subsidy that forestalls more important priorities: namely, supporting workers through an ongoing energy transition that the industry and both major political parties still pretend isn’t happening.