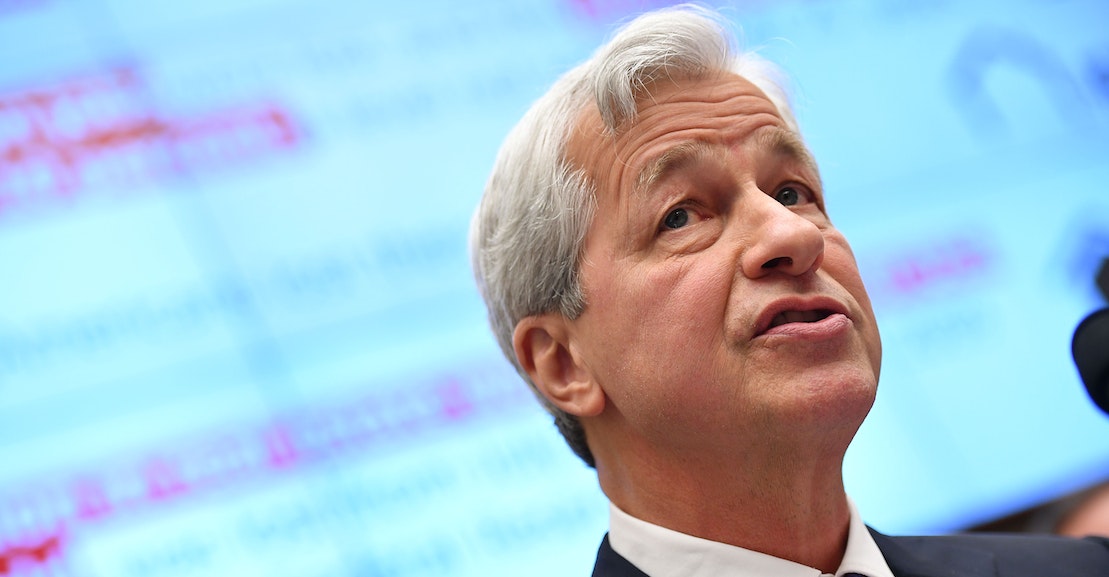 “They think this is going to hell in a hand basket,” one financial adviser told Marketwatch this week, describing his conservative clients’ growing sense of impending doom. In an interview on Wednesday with CNBC, JP Morgan Chase CEO Jamie Dimon, whose net worth is currently around $1.3 billion, likewise fretted about the future of the economy and, by extension, the less fortunate. “I remind people, the world, when you slow down the economy, you are hurting the disadvantaged more than anybody else,” he said.

What, exactly, has given these members of the upper crust the vapors? It’s apparently the thought of a Joe Biden administration raising taxes, even though Biden’s tax plan has the distinction of being one of the mushier to emerge from a Democratic primary race in which Elizabeth Warren advocated a new wealth tax on the rich and Bernie Sanders called for the outright elimination of billionaires. The mere prospect of Biden nominally meddling with their plunder has been enough to compel some wealthy whiners to offload stocks before the end of the year in order to avoid any hypothetical capital gains tax increase that might occur. It also led Dimon to worry over a possible wealth tax (which Biden hasn’t even proposed)—not because it would bother him, naturally, but because it would be “extremely complicated.”

For the rich, Biden’s other recent great offense was to contrast his own working-class roots with Trump’s silver-spoon upbringing and affinity for Wall Street at a town hall in his hometown of Scranton, Pennsylvania, last week. “I view this as a campaign between Scranton and Park Avenue,” Biden said at the event. “How many of you all own stock in Scranton? Not a whole lot of people own stock.” He later repeated the same sentiment on Twitter, to which Soledad O’Brien replied, “NYC’s Park Avenue is amazing. No need to knock it. Would be nice to have a President who sees every American as worth fighting for.” On air, MSNBC’s Stephanie Ruhle further huffed, “I don’t live on Park Avenue, but I live pretty close to it. And do you know how I got there? Working my butt off. He doesn’t want my vote?” Apparently some extremely mild blue-collar signaling—from someone who is currently quite rich and hasn’t lived in Scranton for decades—is all it takes to wound the Park Avenue–adjacent.

What makes the flurry of distress over Biden’s recent (and most likely fleeting) attention to the nonelite even more perplexing is that while the Trump campaign has tried its hardest to depict him as a Trojan horse for bolshevism, Biden’s actual proposals for redistribution—far from salvos of a class war—have been mostly tepid Democratic standard fare. He’s pledged numerous times not to raise taxes on anyone making below $400,000 annually—which is, you know, a lot of money to make in a year—and while he’s proposed increasing the corporate tax rate from 21 percent to 28 percent, that’s still less than it was before Trump’s 2017 tax cuts. “Do I look like a socialist?” Biden recently said in an interview with a Wisconsin TV station. “Look at my career, my whole career. I’m not a socialist.” He’s right. (Unless, of course, you interpret his track record of bank deregulation and other Wall Street glad-handing as a kind of socialism for the rich.) But the modesty of Biden’s proposals don’t matter much, since the wealthy in this country are very good at playing zero-sum games.

A bombshell report released last week by the RAND Corporation revealed an astonishing upward redistribution of $47 trillion from the bottom 90 percent to the top 1 percent between 1975 and 2018. In their paper, authors Carter Price and Kathryn Edwards argued that if the country’s economic gains over that time period had been distributed as they were in the postwar era—that is, prior to the explosion of a bipartisan free market mania that slashed taxes, hobbled unions, and eviscerated public programs—median worker pay today would be about twice what it is. “This really is the entire country versus a very small number of people,” the Center for American Progress’s Ben Olinsky said of the report. After nearly half a century of raking it in at the expense of everyone else, with the enthusiastic blessings of right-wing think tanks and policymakers from both major parties, it’s no wonder that the one percent is now scandalized by whispers of even the mildest reforms.

But that, ultimately, is exactly why now is the time for any opponent of Trump’s crony-stuffed administration to fight for the types of measures that might slow and then reverse the decades-long unchecked transfer of wealth from the majority of workers to the elite. “The incoming administration is going to take stock of the economy and see what their priorities will be, but raising taxes likely won’t be the top priority,” Mark Mazur, the director of the Urban-Brookings Tax Policy Center told Fortune last Friday.

That’s a shame, especially given that Trump’s 2017 tax cuts were broadly unpopular and an overwhelming majority of the public believes that corporations and the rich pay too little in taxes. With state budgets now stretched to the breaking point and millions of laid-off workers still in need of more robust unemployment benefits and other social safety net programs, a tax hike on the same group of people who saw their wealth grow during the pandemic could go a long way toward relief. And particularly in light of the fact that the wealthiest Americans’ gains have coincided with serious hardship for low-income workers, some Sanders-style shouting might even generate a bump of voter enthusiasm.

The only downside, at this point, appears to be injuring the delicate sensibilities of the rich. “High-income earners contribute a lot to the tax base,” Andrew Rein, the president of the Citizens Budget Commission, a New York–based organization that opposes raising taxes on the rich, recently insisted. Wait till he finds out how much everyone else pays.