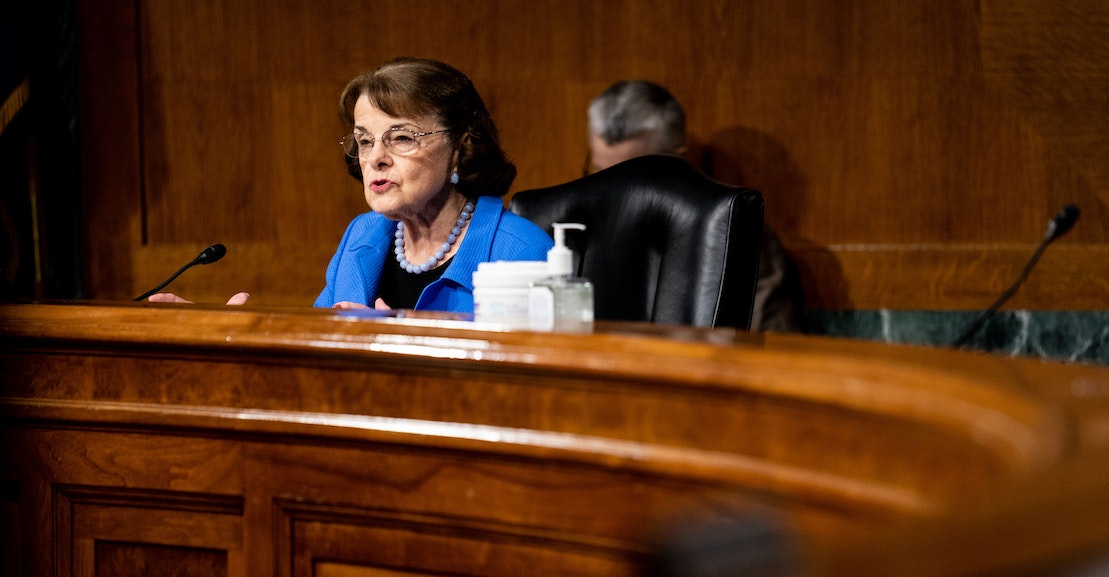 As the first tantalizing tastes of autumn reach swampy Washington, Democrats in Congress are likely finding it hard to enjoy the cooler weather and pumpkin spice lattes: Their next few months are going to be brutal, just absolutely no fun at all. The death of Ruth Bader Ginsburg last week, a cruel cosmic joke that confirmed we live in the Owned Timeline, has set up a Senate confirmation battle in the coming weeks, at the same time as America decides whether to give Donald Trump another term. Further proof that God is real, and he’s a Republican.

The question of what Democrats can actually do to prevent Republicans from installing another right-wing justice on the highest court remains unanswered, but it seems unlikely that they will take former Harry Reid staffer Adam Jentleson’s advice, published in The New York Times, and boycott the confirmation hearings. After all, if Brett Kavanaugh crying about beer didn’t change anything, nothing that they can throw at Amy Coney Barrett, the likeliest nominee on Trump’s shortlist, will either.

Which leads us to another problem: The Democratic charge will be led by 87-year-old Dianne Feinstein, the party’s ranking member of the Judiciary Committee. Feinstein is resolutely not interested in the idea of breaking any kind of norm to win. As recently as a week before Ginsburg’s death, Feinstein criticized the idea of abolishing the filibuster and refused to say whether, as chair of the committee during a Biden administration, she would continue a recent Republican practice of ignoring opposition committee members who object to judicial nominees from their home state. The longstanding “blue slip” process, she said, “fosters bipartisan engagement in the nomination process.” Truly, we are living in a golden age of well-fostered bipartisan engagement!

Concerns about Feinstein’s role in the upcoming confirmation process are not some petty, factional whining of disgruntled leftists. As Politico reported, these fears—that Feinstein is not up to the task of grilling Trump’s nominee for Ginsberg’s seat—are “widespread” among Democrats in Congress, who fret that Feinstein “gets confused by reporters’ questions, or will offer different answers to the same question depending on where or when she’s asked” and appears “frail.” These are normal things for an 87-year-old to do or be; they are perhaps not the ideal characteristics for the person tasked with being the face of the Democratic resistance to another right-wing psychocrat being placed on the court for decades to possess. (The Los Angeles Times’ report on Feinstein’s love of the blue slip process included the detail that she “wasn’t aware” that “Republicans had confirmed judges without them.” Her office later provided a tally: The GOP has done so 17 times in the Trump era.)

More importantly, Politico notes that Feinstein whiffed badly the last go around. She waited weeks to disclose the letter she received from Christine Blasey Ford alleging that Brett Kavanaugh had sexually assaulted her, and only did so after The Intercept reported on the existence of an allegation. One unnamed senator was candid—as candid as an anonymous source can be, I suppose—in their criticism: She’s “not sure what she’s doing,” and the party “may be short two senators” because of her handling of Kavanaugh.

But another anonymous Democratic senator tells Politico that optics are also a concern, insisting that party leaders were “in an impossible position”—the idea being that “senior Democrats can’t replace a female senator for hearings on an expected female nominee to replace a deceased female Supreme Court justice.” Here’s the thing, though: They absolutely can. For a start, they could replace her with another woman. For some reason, Politico reports that some of her colleagues want to replace her with Sheldon Whitehouse or Dick Durbin. (Kamala Harris is also on the committee, and I doubt the virtual campaign trail would miss her, but sure, let’s grill the female nominee with a sexagenarian or septuagenarian man rather than a former prosecutor.)

It is very hard to imagine who would notice, let alone be angry, if Schumer did bench Feinstein, especially if he swapped in another female member—Harris, Mazie Hirono, and Amy Klobuchar come to mind. Does Politico’s anonymous source envision someone mounting a Save Feinstein campaign? This is the sort of blinkered thinking that infects people who’ve been on this Beltway shift too long. It’s also a prime example of Democrats being deathly afraid of breaking rules that have no bearing on the real world—like imagining that it matters to Mitch McConnell whether or not he has the “moral authority” to do something he wants to do. It’s more likely that this is just another example of Democrats coming up with reasons not to do something they don’t want to do.

Even Feinstein’s critics are prone to this cowering: Another criticism brought up in the Politico piece was her apparent misstep in telling Amy Coney Barrett that “the dogma lives loudly within you” in 2017, seized on as “anti-Catholic bias” by Republicans. This is only a problem if you act like it’s a problem. There’s hardly some creeping anti-Catholic plot in American government; in fact, Democrats recently nominated Joe Biden, a Catholic, to be their presidential candidate. More to the point: The party that spent eight years implying the first black president was a Muslim, then embraced a president who openly tried to ban Muslims from entering the country, wants a word about religious bias, do they? As my people say, jog on.

But if Democrats want to put their best foot forward in questioning the next Supreme Court nominee, and the consensus points to replacing Feinstein with someone who doesn’t fill anonymous Senate Democrats with fitful nights of worry, then why not do it? It isn’t that they want to lose, though you could be forgiven for thinking they do. It’s that they already think they will, and they value certain things, like respecting seniority and loyalty in the party, over going all-out to stop this absolutely heinous future that we are inches from falling into.

If Trump gets to seat a replacement to Ginsburg, and a victorious Biden does not do something to neutralize that, like packing the court, there will be a majority on the court for complete conservative domination of policy for years. This would all but kill the prospect of doing anything to address climate change before it’s too late to avoid the worst case scenarios, to say nothing of drastically limiting what Biden might want to do to reform health care (an issue where he starts off having already drastically limited himself to tweaking around the margins of the Affordable Care Act), or labor laws, let alone issues like abortion or LGBT rights.

Republicans will have the votes to confirm the nominee, regardless of what they say during the confirmation process. Barrett could say she ritualistically slaughters dogs and McConnell would still successfully whip the votes to confirm her. This is everything to him—as my colleague Alex Pareene argued, it is the “apotheosis of his career”—and it is everything to the party. Democrats won’t be able to stop this with even the most dazzling prosecutorial interrogation; by their own admission, they certainly won’t with Dianne Feinstein at the helm. But they don’t care enough to try.